I've gotta spend the rest of my life with myself.

I, like everyone else who has ever jammed their phone in your face, have two wonderful children, one almost eight, the other almost four. These two cherubs are the best, smartest and just the nicest little kids on the planet. They really are a reminder of the beauty the world possesses.

Until you put both of them in the same room - then they're little shits. They make you wish that beautiful planet would drop out of orbit and careen directly into the sun.

And while I'll never understand firsthand what it's like to love/hate (mostly hate) a sibling to that degree...one time? I was pretty f--king close.

See, when I was in 7th grade my brother had already graduated. But his super-hot girlfriend, Dana? She was a senior. At my school. When he picked her up so they could go have sex during lunch, he was on my turf.

So...yeah. I...get it. Because as a fat middle-schooler, clearly I had a chance with this fine-ass chick my brother was banging. Clearly. *runs off to bedroom crying* 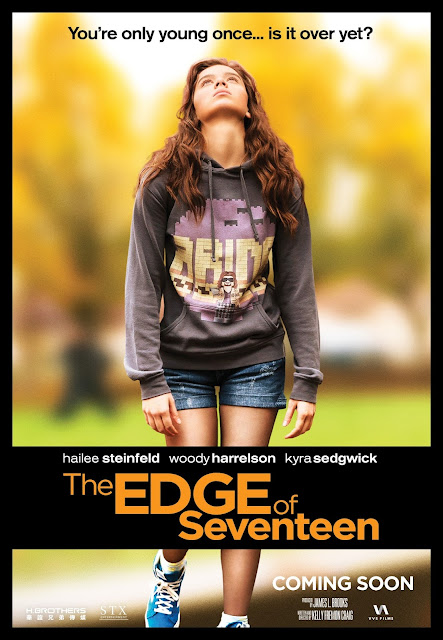 The Edge of Seventeen, while consistently f--king hilarious, isn't a comedy - it's a horror film. Written and directed by Kelly Fremon Craig, this coming-of-age tale routinely terrified me by perhaps foreshadowing what my life will be a dozen years from today. *Shudder* According to this film, my son will grow up to be a quietly confident dude (fingers crossed [ever-so-tightly]). But my daughter? After being the raddest of little girls? She will destroy everything - and everyone - in her path, Godzilla-style.

Good thing I don't plan on dying before then (fingers gnarled into knots), as it's the sudden death of her loving father that sends Nadine (Hailee Steinfeld, f--king born for this role) into the years-long downward spiral we find her in. While that'd be enough to do just about anyone in, at that point the camel's back was only sore. It's when her best/only friend hooks up with her idyllic brother, that that f--ker is snapped in half with the speed and viciousness of a Mortal Kombat fatality. FINISH HER!

Unfortunately for every other character in this film, but fortunately for us, the budding relationship between Darian and Krista doesn't actually kill Nadine, it in fact makes her stronger. Or, at least, makes her anger and self-loathing stronger.

As Nadine's world is turned upside down, she initially goes against her natural instinct of turning further inward and making fun of everything. Instead, she gives being normal a shot and crashes and burns in epic fashion. The resulting emotional breakdown (or as I remember teenage girls, weekday) is equal parts comedy and tragedy. I don't know (or remember?) what it's like being a drowning high-schooler, but I sure as Hell recall what it's like to feel alone in a crowd of mouth-breathing morons.

At 37, I'd like to say to someone two f--king decades younger, oh, it'll get better...but I'm not entirely sure. Life sucks at any point - it just sucks in different ways. You gotta find the few people you can tolerate (and that can tolerate you) and toe that cliff together.

Speaking of like-minded a-holes, here are the Yays and Boos. We're still coming to terms with being closer to the parents' age than the kids, but then we consider the kind of shit we find ourselves talking about and we feel much, much better. And by better, obviously I mean worse. Way f--king worse.

Listen. I never had a chance (or honestly, an interest) with any of my (four) siblings girlfriends (or in the case of my sister, her actual friends), Dana was certainly...intriguing to my twelve year-old eyes. And one day, as I was moving into Bryan's newly-vacated room (upon him foolishly dumping her and moving back to Boston), I found a hefty stack of what would turn out to be naked pictures of her. (And him, presumably)

But as I opened the waxy, paper sleeve holding the 4"x5" photos, I could instantly feel that these were above my pay grade, you know? Beginning to slide the top picture out, I could see Dana lying down, looking at the camera with her startling blue eyes. Her hands were above her head, and her fingers slightly touching her long, light-brown hair. And as I slowly slid the picture further out (I'm assuming my hands were shaking at this point), I could start to see the tops of her (perfect) breasts. And that was the moment I...stopped. You WHAT?!?

I stopped. Slid the picture down and shut the case. Put 'em back in the drawer I had found them in, never to return again. What the f--k, man? Are you serious?

Unfortunately, I am. And the only reason I have ever been able to come up with for my actions that day?

I actually love my older brother. A lot.

Email ThisBlogThis!Share to TwitterShare to FacebookShare to Pinterest
File this under Teenagers Scare...the Living Shit out of Me