There is something fishy going on here.

At the dawn of my teaching career, I was in intern for an entire academic year. I would report to the same elementary school every single day, not knowing my fate. Maybe I'd sub in 4th grade, or maybe help the gym teacher. Maybe I'd observe Mrs. Szwed in her third grade class, or possibly attend the 1st grade team meeting. But in the middle of that year, all the maybes took a two-week vacation. One of the teachers had been in a car accident, and I was going to cover her class for ten consecutive days. Morning and afternoons. Fifteen children in each section.

I was going to teach kindergarten. 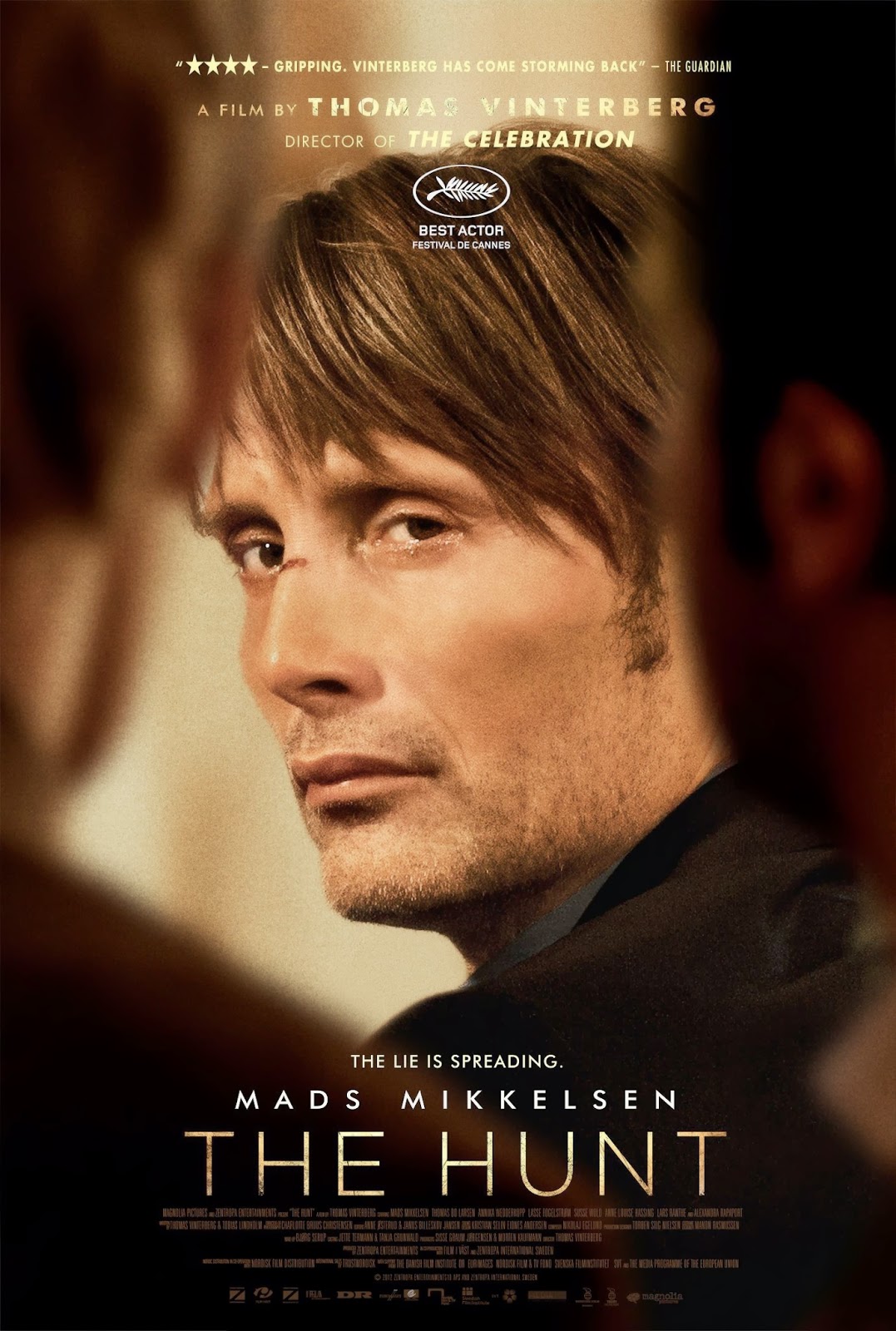 Teaching kindergarten, as a man, is dangerous business. Most people, when you tell them that's what you're doing, will smile and make a Kindergarten Cop reference and not give it a second thought. But let me assure you, having a kid stand up and say 'boys have a penis, girls have a vagina' is funny and not all that serious. But what little Karla says, is the direct opposite.

The Hunt, nominated this year for Best Foreign Picture, is the best movie I will never watch again. In fact, I hated almost every f--king minute of it. It's not that it's bad, actually, it's impossibly compelling. But it's also as frustrating and upsetting as anything I've ever seen. And for me, all too possible.

Mads Mikkelsen, an ass-kicking Dane, plays the quietly charming Lucas. This guy, by all accounts (minus his ex-wife's, perhaps), is kind and good-natured dude. Loved by his friends and adored by the children he works with, Lucas appears to be someone on the cusp of having it all finally come together, after going through a recent rough patch. Unfortunately, after a confused (and scorned) little girl wrongly accuses him of sexual abuse, everything he knows comes crashing down around him.

Saying Lucas's life goes to shit, is a gigantic understatement. In cinematic terms, it's like saying the Titanic took some damage, or that Only God Forgives[review] kinda dragged. Those films featured (or simply were) grand-scale disasters, sure, but what happens to Lucas is even worse. Everything he knew, every truth he had, is needlessly destroyed. The only thing worse than how bad things are, is how fast they got that way.

The town, as in every single person not in his family, not only abandons Lucas instantaneously, but they actually go out of their way to make his life a living Hell. And while this vile and despicable treatment may be understandable with say...oh, I don't know, actual proof, the residents simply become consumed with fear and mass hysteria. His alleged actions have provoked a complete lack of humanity.

The words of a kindergartner, as horrible and awful as they are to hear, instead of being considered, are taken as indisputable truth. In the frenzied minds of the townspeople, Lucas is a monster, and immediately condemned to an inescapable fate falling just short of sure death. People who have known him his entire life, are too scared, too stupid (or an unholy mix of both) to think for themselves. I'm not sure if it's that they won't listen to him, or that they can't. Either way, it's absolutely terrifying to witness. And something, I don't think I'll be able to soon forget.

My kids are currently too young to have been afforded the opportunity to really screw up, but I've been on the other side of the table. I've been the teacher sitting across from the parent and I've lost count of how many times I've watched an adult wrongly (and perhaps blindly) support their kid. It's scary that people exist who don't need evidence because they know their child, but it's a truth that exists in every school on the planet. Maybe admitting their son or daughter is lying reflects poorly on their ability as a parent. Either way, I get it. Something we just need to believe, truth be damned. The Hunt depicts this with startling realism. Karla's parents know with their hearts that she's telling the truth about this awful crime committed against her. If only they knew with their heads.

The Hunt should be required viewing for anyone that has a kid, knows a kid or ever was a kid. The film shows, without any flair or sensationalism, humanity at its worst. We see, up close, what the power of a child's words can do to smart, rational adults. We see ordinary people, like either of us here, succumbing to fear and hatred. And once it gets rolling, it's almost impossible to stop. I know that most of you don't watch a movie to be overcome by helplessness, but this film is truly captivating and a must-see.

Certainly not required, and altogether helpless, are the Yays and Boos. We haven't seen any of the other Best Foreign Picture nominees, but clearly The Hunt has our vote. Apparently, we've learned nothing about blind loyalty. 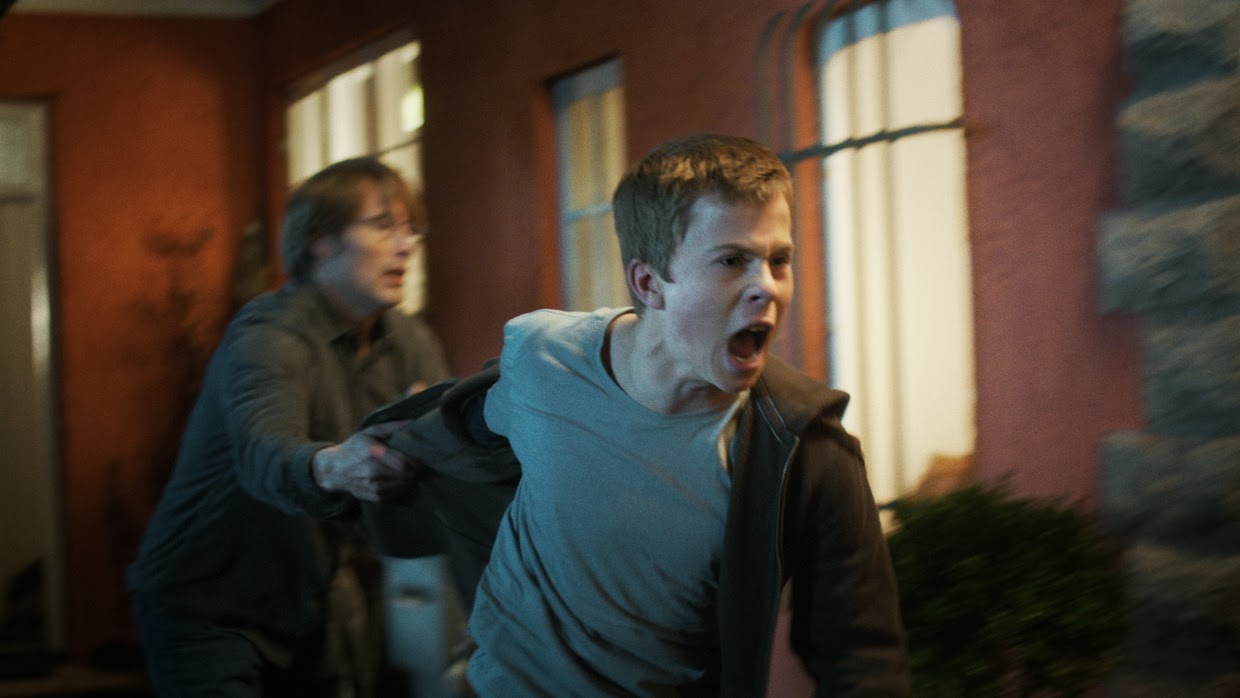 
Boooooooooo!
Toward the end of my run in kindergarten, which was equally embarrassing and exhausting (there's a lot of singing in kindergarten), our principal paid my class an unexpected visit. I was getting the morning children ready to go home, when the principal asked this one little redheaded girl, how do you like Mr. Brown? Without hesitating, this chick turns around, sticks her little butt out and says, no - whispers, and I kid you not, she whispers...

He spanks my hiney.

It was nearly the beginning of my career, and almost the end of my life.
Posted by m.brown at 11:04 AM

Email ThisBlogThis!Share to TwitterShare to FacebookShare to Pinterest
File this under Call the (Kindergarten) Cops