With family, one hopes for the best.

In the past we'd play the odd game of Connect Four, Battleship or Yahtzee, but our longest rivalry centered around a game called [nerd alert] Dropmix, where the only real losers are the hammer anvil and stirrup of nearby people. Recently, we dabbled in Scrabble for the first time in forever, though I'm not sure how much fun she had (I totally kicked her ass). Words, as you can so obviously tell, is my good...thing. 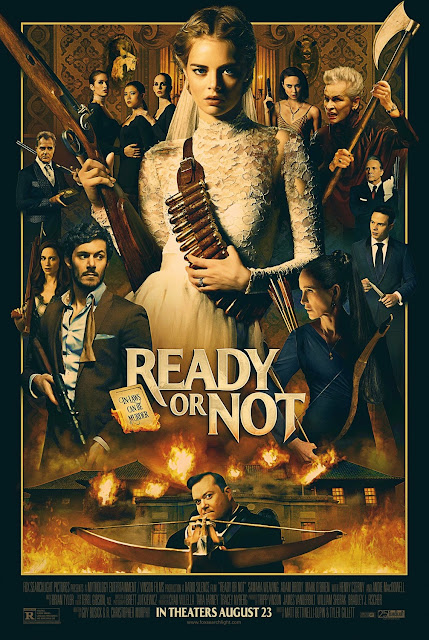 In the absurdly kickass Ready or Not, the game is less triple-word score, more quadruple homicide. Set just hours after a rather hoity-toity wedding, the lovely Grace finds herself playing an initially awkward game of hide-and-seek...against her in-laws (oddly enough, on my wedding night, I was also hiding from my in-laws).

Apparently, her husband's family, after amassing generational wealth in the lucrative board game business, partakes in a silly tradition where the newest member of the family has to *insert Jigsaw voice* play a game. Grace picks a card any card, and out comes the seemingly innocuous children's game. Though, when we played it, as best as I can remember it, no player was issued a f--king crossbow.

I know you already knew all of  that, you knowledgeable devil,  but short or repeating the killer premise, everything else is as spoiler-filled as that goddamned trailer. Grace has to survive the night, and judging by the already announced sequel, she will, but holy shit are there some major surprises along the way (my favorite being something that would easily get me fired, but might just be worth it regardless).

Speaking of things that would get me shitcanned, here, after a lengthy hiatus, are the Yays and Boos. If I don't see at least a half a dozen Grace's this Halloween, I'm officially quitting life. I mean, Life. Which actually isn't a big ask, because I hate that f--king game and all the penis-shaped kids ruining my lucrative career in accounting. But that spinner though...

Well, other than Trouble and Sorry.
Posted by m.brown at 7:41 PM

Email ThisBlogThis!Share to TwitterShare to FacebookShare to Pinterest
File this under Shoots and Splatters