Days after celebrating her sixth birthday, this site's latest contributor, after badgering me endlessly, has returned. Though the official theme of the gala was equal parts mermaids and the solar system, after a recent trip to the movies, as kids typically do, all the party planning went out the window. Yeah, mermaids are cool, and the solar system's fascinating, but turns out nothing can really compete with trash. 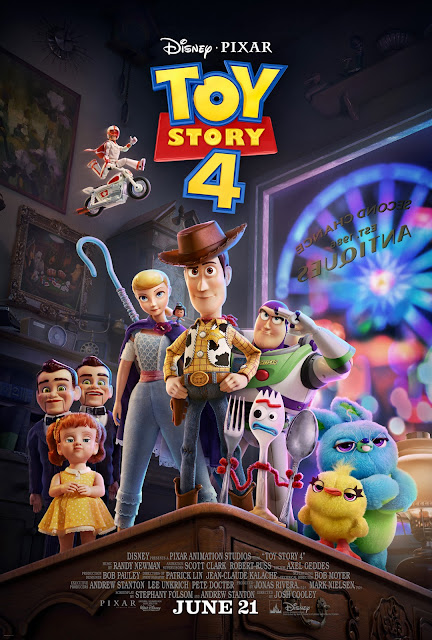 While he was slightly amusing in the preview, the second Forky appeared in Toy Story 4, I knew my kids were done. Even before the perfectly-cast Tony Hale started talking, the little home-made spork thingy slayed them. Combine his goofy expression with a delightful insistence he's trash, and you've got everybody's favorite character ever. Or you did.

Because Ducky and Bunny hadn't shown up yet.

And neither had Duke Caboom, Canada's greatest stuntman.

Obviously, we all vastly enjoyed the latest Toy Story movie, and I whole heartedly/unnecessarily recommend it. And being that this was the first one that came out when our kids were the right age, this is also the first time all the toys came home, too. I'd recommend those too, unless you get us a Benson. Because those are terrifying.

What follows is yet another conversation with my now six-year old daughter. She's very interested in the amount of likes this post will get, so, uh...I hope you enjoy it??? (I tried to explain to her that not everything has likes and she basically just nodded as if I didn't get it)

Are you ready to do this again? Review a movie for your dad's website?
Yes. Very much.

[she crosses to see the screen]
Go over there!
Can I just have a book with me to look at the characters?
No.

Okay, let's begin. Can you tell someone who hasn't seen the movie yet, what it's all about?
It's about, um, when, um...so...Woody, it's like, about when Forky...when he goes into the trash and Woody tries to save him. They have to like, get the key to save Forky. 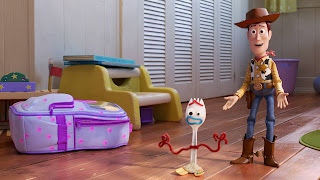 Uh, who's Forky?
Bonnie made Forky.

Uh, who's Bonnie?
Bonnie is the little girl in the movie.

How old do you think Bonnie is?
I think she's five. Five or four.

And how old were you when you saw this movie?
The first time? Five.

So does Bonnie speak to you on a personal level?
What? What does that mean?

Nevermind.
I don't know what you're talking about. "A personal level?" I didn't get to finish who was Forky.

What I mean is, is that the character is the same age you are. Does that make you like the movie more?
Um, no it does not. It doesn't make me like the movie anymore, because I'm not five now, I'm six.

Is six too old to enjoy this movie?
No. It is not too old. 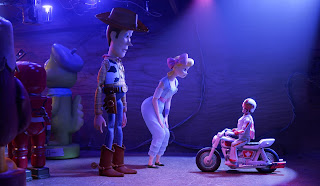 What would be too old to see this movie?
Um, um...forty?

So are you saying that I can't enjoy the movie?
You can. I mean strangers that are forty.

Ah.
[she starts playing a flute with an empty pencil holder]

Okay, let's get back to the movie.
Who's Forky, right Dad? That's where we left off.

I think everybody knows who Forky is - get over there! [she has crossed over to look at the screen]
[laughs]
What would you rate this movie, if you had to give it a score?
Wait, like one to ten? Ten stars.

Why do I even talk to you about movies?
[laughs] I don't know. Because I'm your six-year old daughter.

Do you think all dad's talk to their kids about movies?
No. I don't think so.

What was your favorite part about Toy Story 4?
Um, the end when Bunny and Ducky have laser eyes and they chase the guy who works at the little target game. [she pretends to shoot lasers across the room while stomping on imaginary things]

Why was that so funny to you - the end?
Because! After they were done with their laser eyes, Duke asks, do you really have laser eyes?, and they say yes. Duke says Wowwwwww. 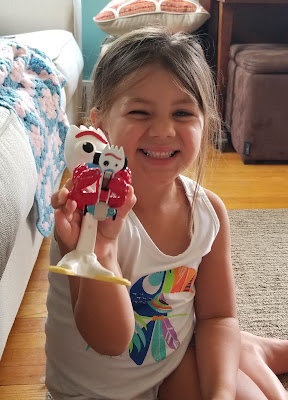 Anything else we should say before we go?
Uh, yeah. I forgot to tell you how Forky's made. Woody sneaks into Bonnie's backpack--

No one cares.
[quickly] Woody sneaks into the trash can and picks out googly eyes and pixie sticks and pipe cleaners!

Goodbye.
I WANT TO READ IT!

Now that she has contributed twice, I'm pretty sure my son wants to get on here at some point, too. *shudder*

Unless they love trash.
Posted by m.brown at 9:42 AM

Email ThisBlogThis!Share to TwitterShare to FacebookShare to Pinterest
File this under Yo Gabby Gabby