We're not here for bookclub.

Every year, as a teacher, you're guaranteed to get that kid. The one that's only happy when everyone else is utterly miserable. And last year, that student was a young lady named...well, let's call her Joanna. Joanna hated everything about school. Every adult. Every kid. Every subject. No lie, for someone who was weeks out of elementary school, this young lady was terrifying.

But before she got kicked out for coming to school high (at age twelve), not coming to school at all, telling most adults exactly where they could go (and what they could do to themselves when they arrived), and basically trying to fight everyone, I decided we were going to be friends. Best friends. Our bond? It was going to be over books. Good books. And whatever book was her favorite?

I was going to read it. IMMEDIATELY. And we'd have our own little book club.

This is something that I did. 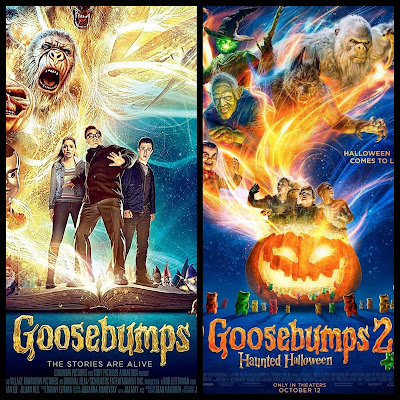 Somehow, in my almost forty-something years on the planet, fifteen as a teacher, thirty-five plus as a reader, and all of them as a horror-loving weirdo, I had never read anything by R.L Stine. Welp, turned out ol' Joanna was a fan of the Goosebumps series, and with 235 books to choose from, she recommended/demanded I start at the beginning with Welcome to Dead House. And, to my absolute bewilderment, it was actually pretty scary. Not Joanna during standardized testing scary, but close. *shudder*
For the Halloween season, me and the other residents of the fallout shelter didn't watch all that many scary flicks, but we did manage to crank up (and out) 2015's Goosebumps flick and it's moderately disappointing follow-up, 2018's Goosebumps 2: Haunted Halloween. Though my kids were not super into the idea of watching these spine-tinglers initially, by the end of the double-feature (spread out over weeks, because of course it was) they'd been converted into fans of all things R.L. Stine. So when I broke their fragile, little hearts with the news that there would not be a third film, I figured the fact that there are literally hundreds of books they could choose from would ease their pain. It did not. You have to read books, with your eyes and your brain, and even my own kids are like, nah, we're good.
Speaking of being good, the first flick is surprisingly that, where two goofball boys open mysteriously locked books, inadvertently unleashing all of R.L. Stine's monsters on a small, picturesque town. Led by a charming cast and a delightfully-miserable Jack Black (as R.L. Stine), this one is super family-friendly and just creepy enough to watch on a cool, October night. The ending is a little...odd, but a good time regardless.
Part two loses points right off the bat, as almost none of the original cast return and Black sees his screen-time drastically severed. The new kids aren't terrible (the chubby kid from It is solid), but it's definitely a downgrade, and with the story being, well, a carbon copy of the first one, the thrill ain't exactly gone, but it's close. Good thing Slappy (the murderous ventriloquist du---, puppet) provided some pretty ridiculous moments to put some flavor crystals on what were essentially microwaved leftovers.
Speaking of leftovers, here are a couple of Yays and Boos that I've been sitting on since Halloween. The only thing scarier than a possessed puppet, is the thought of opening my personal computer, after seven and half hours of *deep breath* Zooming. Hence why Two Dollar Cinema is also becoming Two Posts a Month...um, cinema.
Yaaaaaaaaay!
Boooooo!
When I was in sixth grade (900 years ago), I too was all about horror garbage, but I was reading stuff like It, Misery and Pet Sematary and watching Jason butcher post-coital teens (and pausing the best parts like a true delinquent), instead of reading age-appropriate stuff like Goosebumps. At least I turned out normal. *crickets*
Anyway, my kids have a long way to go until they experience the heavier stuff, as my wife is really hesitant to open them up to such twisted, um, content. Meaning? I'm going to have to do it on the sly, which is really weird and uncomfortable (my older brothers showed me the way), to say the least.
If only I knew a troubled, older child, who was already super corrupted and could guide my children into the ways of the wicked. Hahaha, just kidding.
I know hundreds of them. Last year, there was one Joanna. But the year before that? I can't even tell you the number without getting...
you know...
chicken skin?
Posted by m.brown at 3:11 PM

Email ThisBlogThis!Share to TwitterShare to FacebookShare to Pinterest
File this under It's Only a Nightmare!