It's amazing what you can get used to.

When even the absolute craziest shit ever, might get you to glance up from your phone for a blink or two, you know humanity is pretty much f--ked. They always talk about lowering the bar, but we all know the goddamned bar melted at the earth's core years ago. And when it did, it didn't even trend on Twitter. Maybe because some handsome young dude said he liked wearing dresses that day, because that? That's UNBELIEVABLE. I mean, what about the children? Won't anybody think of the children?

Anyway, when you do get shocked, you know, when something finally rattles your cage a bit, it can make you feel alive.

Or dead. It kind of depends on who's behind it. 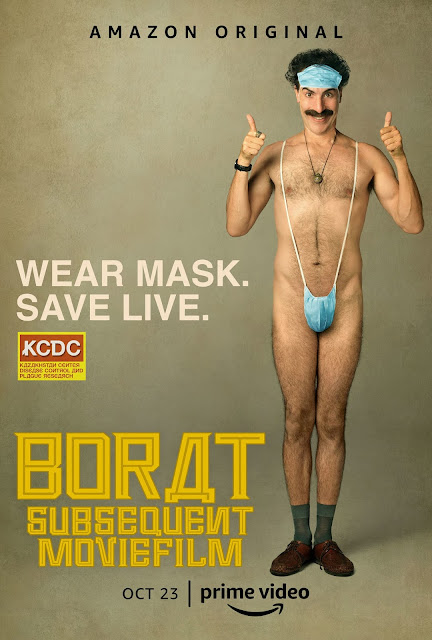 As the poster may or may not tell you, Sacha Baron Cohen has the biggest balls in Hollywood, and in case that slipped your mind, he reminds us all in the Amazon-exclusive, Borat Susequent Moviefilm. Released way back in October, when Trump was still officially? the President, the sequel narrows Cohen's crosshairs not just on dumb Americans, but dumb Americans under Trump. It's a lot like the first one, but now with added racism! Who knew you could cram any more in there?

It turns out the events of the first film brought great shame to Kazakhstan, so the setup here is that Borat will have to make amends. His plan is to go to America a peace offering (in the form of a monkey), but Borat's newly-discovered daughter becomes the gift instead. It all doesn't really matter, because all absolutely f--king insane. But really f--king funny, too.

Where you and I need oxygen and sunshine to survive, apparently Cohen is able to live and breathe on a combination of danger and cringe, so it's a good thing the second Borat films has a shit-ton of both. Clearly, the guy is an absolute mad-scientist of satire, a giant in whatever-the-Hell genre this is, and as hard as Subsequent Moviefilm can be to watch at times, doesn't mean it's anything short of legendary. Cohen straight up risked his life for this shit!

But the weirdest thing for me? As absolutely shocking as it was...it wasn't surprising. And that might be because I live in America, where gross racist shit...is basically domestic policy. We used to treat people like garbage quietly, and it took work to expose them. Now all it takes are eyes. Though I've somehow (almost) become used to Borat's brand of satirical nonsense, what's even more disheartening is that I've absolutely become numb to the nonsense of his favorite target, the United States of America. Our (hopefully?) outgoing president has been working for years at fully eroding the tattered remains of our national decency, and if I check Twitter, I'm sure he's hard at work, because it's not like he has a f--king pandemic to worry about.

Alright, enough. I could bitch and moan all day, but you're probably used to that, too. How about we shake things up with the Yays and Boos? Oh...right. [note: there is absolutely no effing way to discern between the Yays and the Boos in this film...sometimes it's good cringe, sometimes it's bad cringe...]

Yaaaaaaaa...
...aaaaaaay!
Boooooooooo!
When I started writing this post, the election had only recently ended and Trump was still bitching and moaning (from Twitter, naturally) about illegal votes and a rigged election. At last check, he had finally relented...somewhat, and is now apparently willing to be dragged kicking and screaming across the White House lawn. I know that means he isn't going away for ever...
...but that f--ker not being our President?
That I could really get used to.
Posted by m.brown at 2:21 PM

Email ThisBlogThis!Share to TwitterShare to FacebookShare to Pinterest
File this under Very Niiiice (that he's gone)