We don't have time for zingers.

Through work connections, I got hooked up with a complimentary room in the Back Bay Hilton. A nice one, too. It was Valentine's weekend, and I quite frankly had three things on my mind: getting out of town, my girlfriend and, well, I'll let you figure the other one out. At this point, my roommate had already moved/dropped out of college, so it wasn't a privacy thing. Just ask any guy, it was the unlimited possibilities of a big shower and an even bigger bed.

We dropped our bags at the foot of the bed, peeked out the window, you know, quickly went through the motions. And then? Then it was on.

But as quickly as it all started? It ended. Badly. It might have been a rip, a tear, maybe even a pinch. But...

...let's just say the Overlook isn't the only hotel to feature a bloody shaft. 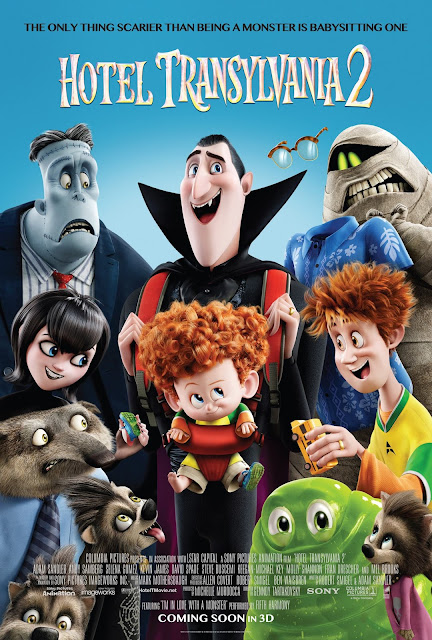 But even that awful hotel experience was better than Adam Sandler's latest theatrical effort, Hotel Transylvania 2. While I have been essentially the last idiot faithfully aboard the Sandler Express, even in these lean years, safe to say I'm now joining you and the rest world along the tracks. Rotten tomatoes in hand.

To say this movie is a resounding disappointment would be putting it mildly. It is abysmal in just about every way possible. This is the Halloween movie equivalent of the old lady who gives out apples instead of candy. The first film was a surprisingly sweet and delicious Granny Smith [review]. But this? Not only is it bruised top to bottom but it's rotten to the core, too. In fact, it's begging to be thrown back to where it came from. Just check for razor blades first....

After genuinely liking (and re-watching) the first film, I assumed the sequel would be, at best, a watered down version of its predecessor. Less laughs, less surprises, and of course, less originality.  If only we had been so lucky.

There was a chance, though. I'm almost sure of it. After Mavis and Johnny fell in love in the first flick, it only makes sense that they totally get it on, um, and have a kid, right? Right. Well, while that's awkward enough, it turns out this movie isn't really about either of them, but it's somehow about Dracula (Sandler) instead. Turns out ol' Drac has lost his mind and is insistent on making sure his grandson, Denis, turns out to be a vampire. Sure, he'll love him either way...well, not really. This kid better be a vampire...even if they kill him trying to find out. 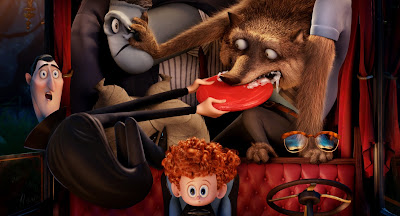 While maybe there might sound like a drop of hope in that (poorly-written) summary, trust me - there isn't. It's all so impossibly uninteresting, it's as if someone watched every single uninspired Adam Sandler flick of the last fifteen years...and then spent 80 million dollars animating them together. Not only does Sandler sound bored, but so do each of his cronies. I think I could hear magazine pages turning underneath as the characters were speaking. Though...that may have been just the other dads in the theater.

Speaking of unfortunate losers, here are the Yays and Boos. This is our second 'spooky movie' of October, and at this rate...maybe our last. At least we've covered both ends of the spectrum. 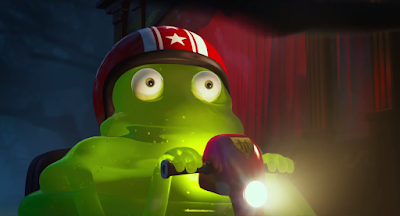 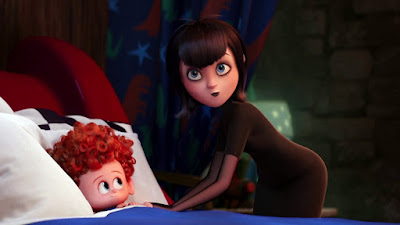 ...and two other dudes. Going to an Indians game the next day.

At least no one shattered their bat...
Posted by m.brown at 1:10 AM

Email ThisBlogThis!Share to TwitterShare to FacebookShare to Pinterest
File this under The Monster Gash