As a little kid, I'd always choose flight, because, Hell, it's flight. Like, you could just fly around the world like Superman, or, because I'm old so very old, like Mighty Mouse. Or, and I'm not a hundred percent sure on this, Captain Caveman. Regardless, you were flying, and that was all that mattered. You saw yourself zooming over your neighborhood like the opening shot to every kids' movie ever, and you'd think there's nothing better, that would be amazing.

But when young boys become young men, things change, and instead of the super-hero ability of flying, you choose invisibility, because, well, boobs. I'm pretty sure that was all I was thinking about, and quite frankly, I'm kind of pissed that I had to consider this hypothetical, when that's less time for pondering, the aforementioned chesticles. Because in your teenage boy mind, there's nothing better, and they would be amazing. 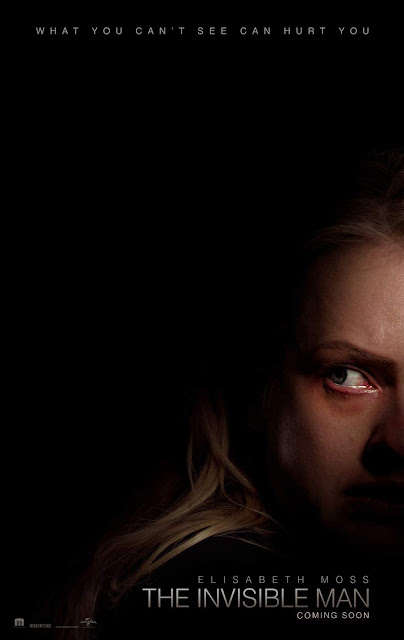 Maybe there's something better, but you know what also is pretty amazing? Leigh Whannell's updated look at the Universal classic, The Invisible Man.
While that might be a bit of an overstatement (it's good), after catching the preview in the theater back when those were a thing, I had zero expectations the film would be anything more than more rehashed garbage for a variety of reasons. It was being released in February, it didn't really have anybody in it, and the biggest offense? The preview showed the whole goddamned movie. Oh, and a little bit of guilty-by-association with that f--king updated Mummy flick [review] with Tom Cruise, because that movie can suck all the dicks, whether they've preserved for all eternity or not.
While I've never seen the original flick from 1933, and my memory of Hollow Man is spotty at best (did Kevin Bacon show his invisible wang, or am I just wishing out loud?), this latest version of the classic tale features an optics inventor/eccentric millionaire nutjob stalking his (theoretically) now-widowed wife, Cecilia. Yeah, according to everyone but Elizabeth Moss' character, the maniacal Tom offed himself a while back likely after casting his mail-in ballot for Trump. Good riddance, as the minute we spent with this guy was nothing short of toxic. And not the fun Britney Spears dressed as a flight attendant kind, but more of the date-rapey, woman-hating, full on f--kface variety. Oh, that kind.
Cecelia wants to believe this good news about his grisly suicide, but Tom was a top-shelf asshole, so she's pretty f--king skeptical, to put it mildly. Lucky for her, she's now living with good friend James, a full-time cop and single father/part time chiseled Greek god. I don't know about her, but I feel safe, even with that mysterious chair indentation and unrelenting sense of dread around every corner.
No shit? I didn't plan on ever seeing this movie (and you know I'll see anything) until I recently saw a tweet about the restaurant scene, and I was instantly intrigued. And while I hate people, I love gathering, so this much-liked bit of nonsense on my phone was all I needed to give it a shot.
Guys, I was already into the movie (even though it was all fairly...familiar [damn that trailer]), but can I just tell you? THAT MOTHERF--KING SCENE DID NOT DISAPPOINT. On my couch, in a moderately lit room, I audibly gasped, like loud enough to wake the kids. Hell, I'm pretty sure my wife legit died for five or six seconds. She's fine now.
I think.
Who isn't thinking, ever, are the Yays and Boos. As much as I enjoyed The Invisible Man, I'm vigorously kicking myself in the nuts that I didn't catch it in the theater. Mainly because it would have been electric, but also partly due to the fact that my last theatrical visit was for Bloodshot [review] and the only thing you can't see in that one is Vin Diesel emoting.
Yaaaaaay!
Boooooooo!
I kind of slipped it in there, um, but if you can believe it, my wife watched this whole flick with me, and she didn't fall asleep. She claims (and has for years) that she hates scary movies, but I want to use The Invisible Man as a springboard, maybe build up a little blood-soaked momentum. I tried Gerald's Game, the movie, not...handcuffs and an almost-dead dog, but she wasn't in to it. Any other suggestions? Oh, and make it quick - the election is in a week.
I mean after that, I'm assuming we won't need movies to scare the shit out of us. Angry and/or Jubilant red hats will take care of that.
Posted by m.brown at 4:11 PM

Email ThisBlogThis!Share to TwitterShare to FacebookShare to Pinterest
File this under Being Transparent