Try not to die, okay?

Even though I'm not really plugged in any more, seldom do I get a chance to see a movie theatrically that I know absolutely nothing about. But after checking my phone and clearing it with Mrs. Two Dollar Cinema, I decided to head to a late showing of a film that I quite honestly had never heard of. Never saw a trailer, didn't catch anyone out promoting it.

I saw the title, looked at the cast, shook my head at the rating, and just f--king went for it. Better judgement be damned. Yeah, I probably wasn't the ideal age to undertake such an endeavor, but f--k it, you know?

I wanted something to write about. 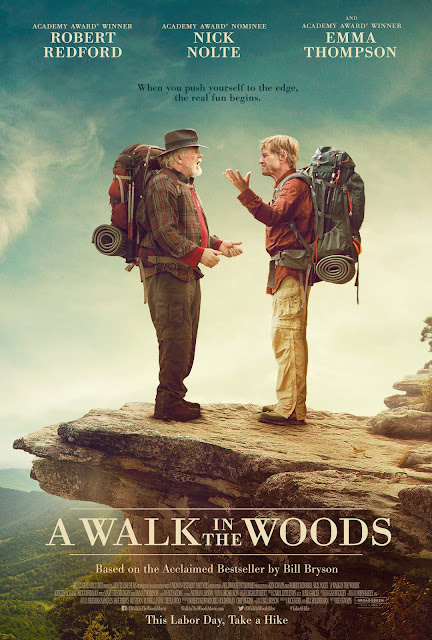 A Walk in the Woods isn't about a stagnating thirty-five year old movie blogger, but late Sunday evening, it sure as shit could have been. Instead, it tells the story of an aging writer who after attending yet another funeral decides to go for a walk. Well, more like a hike, actually. A two-thousand, one hundred and eighteen mile hike to be exact. At least he didn't go alone. I mean...that'd be embarrassing.

Robert Redford plays real-life author Bill Bryson, a nice-enough guy living out his days in a picturesque New Hampshire town. We meet Bryson on the set of a morning talk show, where the only person less interested than being there than he is happens to be the person interviewing him. Bryson has released an anthology of sorts, and we come to find out the only writing he's been doing for the last couple of years has been for other people's books. He's bored, and it's all too apparent that the thought of being at home with his wife may indeed kill him. So he does what any man would do in that situation: he gets the Hell outta there.

Not more than two minutes away from his house is the Appalachian Trail, and Bryson is overcome with the idea to traverse the entire f--king thing. To somewhat appease his (rightfully) concerned wife, ol' Bill decides to call up some friends (even a dead one, inadvertently) and conquer this trek together. Unfortunately, just like Bill, these guys are old, and each returned call is some form of, Bill, have you lost your motherf--king mind?


Enter Stephen Katz (a grizzled, possibly homeless Nick Nolte), an old 'friend' who heard from someone else about Bill's epic plan. Stephen's up for whatever, as his current domestic situation is considerably messier than Bill's. The catch, and there's always a catch, is that while Stephen's mind is in good shape, his body ain't. This f--ker would probably get winded playing Oregon Trail, let alone hiking the Appalachian. Either way, watch out for that dysentery. It's a real bitch.

Also potentially lethal, are the Yays and Boos. Yes, they had no clue either what the f--k we were doing at a movie about two old guys taking a f--king walk, but hey, would Agent 47 really have been a better call? Don't answer that.

Yaaaaaaaaay!
Boooooooooo!
You know, I realize that even more than usual, I haven't really touched on whether or not I even liked A Walk in the Woods. Honestly, it doesn't even matter. You're not going to watch this, and anyone that actually did likely isn't reading a f--king movie blog. So why even bother going?

Email ThisBlogThis!Share to TwitterShare to FacebookShare to Pinterest
File this under The Gray Mile