Do yourself a favor, and just go with it.

In politics, it's like the worst thing you can be called. If you dare to change your mind about something (assuming, of course, after careful consideration) people rally around the idea that you're some kind of pushover, or that you simply will say anything to appease the masses.

But if something was a bad idea on paper, executed to something only marginally better, I believe it would be totally reasonable to not jump up and down and support it. If after a few years, however, the idea was revisited, tweaked, and made better, is it really a sign of weakness to now fully endorse it? I don't think so, but Hell, what do I know? 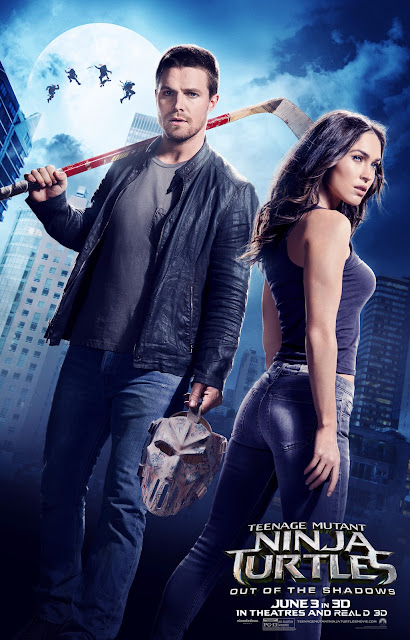 Yes, after seeing Teenage Mutant Ninja Turtles: Out of the Shadows with my son Matty, I'm now fully on-board with the live-action reboot of the old cartoon classic. Walking back from my general dislike of the first Michael Bay-produced Turtles flick [review], which I saw without him, by the way (he was too scared...bawk bawk bawk), I now one-hundred percent support these hideously ugly monstrosities known as the modern day Ninja Turtles. They have my unwavering and enthusiastic affection.

Unless the third movie sucks, of course. Well, assuming they make another one.

While the first flick was, at times, too serious for its own good, Out of the Shadows is sweet, stupid fun. The whole thing is incredibly easy-breezy, with the action and laughs coming early and often. Again, it didn't hurt that my goofball son was along for the ride this time, but even if you don't have a nerdy six-year old with you (he now has a Star Wars shirt that he plans on wearing to every movie we see this summer), this one is still a solid action-comedy.

This time around, with the origin story complete, the already established Turtles can get right to it. No back story, no silly brooding, just bad jokes and good action. Oh, and Megan Fox in the tightest of facial skin clothes never hurts, either.

Old nemesis Shredder is riding the Grey Goose to an upstate prison, when word reaches our guys that the Foot Clan is going to bust him out. Donnie and his brothers hit the road in pursuit, and a pretty rad highway battle ensues (think The Matrix Reloaded without the Albino Ghost Twins). Unfortunately, just as Shredder may be apprehended, he vanishes into, yeah, you guessed it, another dimension. There, ol' Shred-head meets Krang, and the dreaded evil plan is hatched.

Apparently some powerful object, capable of world domination, has been broken into five pieces, and it's up to Shredder and his intellectually-disabled henchmen, Bebop and Rocksteady, to recover them. Once the pieces are put together, a portal will open, allowing this mysterious individual to show up, destroy NYC, and I guess...rule the other 99.9% of the planet immediately. Unless, of course, the Turtles can stop them...and not have the cops all up in their shells.

Speaking of things you don't want all up in your business, here are the Yays and Boos, The Turtle Blimp is still one of the best toys we've ever had, even if our blimp smelled like stale beer and cigarettes years later, after one my uncles insisted he'd inflate it himself (after polishing off a case and two packs of Marlboro reds).


Booooooooooooo!
The more I think about Teenage Mutant Ninja Turtles: Out of the Shadows, the more I like it, honestly. I had so much fun with my son, I'm actually considering taking him again. Or maybe we'll go see Warcraft instead.

But that movie is supposed to be really shitty, right? Well, if a bunch of people I've never met didn't like it, there's no way it's for me.

What do you want me to do, think for myself? I would never.

Well, unless you really wanted me to.

Email ThisBlogThis!Share to TwitterShare to FacebookShare to Pinterest
File this under Turtle Power to the People