Dazzle them with the basics.

I don't want to know. Ever. I've got enough to worry about as it is.

Overwhelmingly joyous, or heart-crushingly awful, please, whatever you do, don't ruin the ending. Whether we're talking a DVR'd sporting event or a new theatrical release, the less I know the better. And if this happens to be Big Fish and you're the old lady with the eye, do us both a favor, and don't flip up that patch. There's not a single cell in my brain curious to know when my heart will beat its last beat.

But when we do get to the end, when the big show's over and the house lights come on? At that point? Yeah...

...feel free to explain everything to me.  And don't leave anything out. 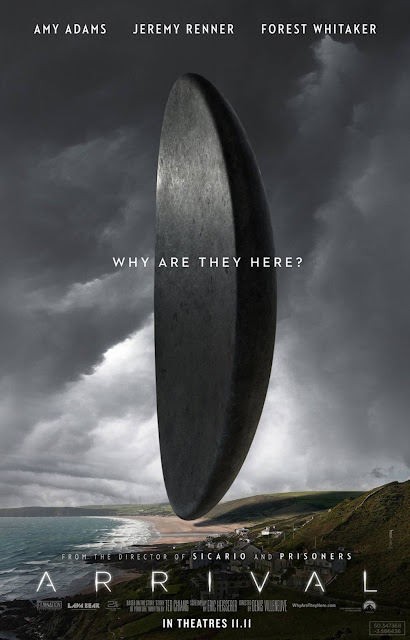 I'm not entirely sure what to make of many of the events in director Denis Velleneuve's latest film, Arrival, but I'm quite positive I loved what they coalesced into. Bordering on hypnotic, this mysterious piece of science fiction has stayed with me long after the credits rolled. And try as I might, I can't seem to shake much of what I saw...even if I can't make sense of it.

Amy Adams is Dr. Louise Banks ('plays' felt like the wrong word), a linguistics professor quietly trudging through life at a small university. Shortly after twelve massive spacecraft appear all over the globe, the United States military recruits Dr. Banks in an attempt to communicate with the extraterrestrial visitors. Banks is reluctant, but knows she is the best person for this impossible mission. Moments after taking the job, Banks is whisked away to Montana, where the 1,500 foot ship awaits her.

Like falling down a rabbit hole in glorious slo-motion, Arrival has this dreamlike trajectory that is simultaneously serene and utterly intense. At first glance, a film about the relationship between words (and time?) may not seem like something to propel one to the edge of their stadium seat, but exhausted as I was, that's where I found myself. Every action, every conversation, Hell, just about every moment carries a weight that's rare in a mainstream science fiction film. From start to finish, everything matters.

Outside of the poster and a few trailers, I really didn't know what to expect from Arrival, and if you haven't seen it, go ahead and close down now (though, trust me, I couldn't spoil the ending if I tried). And even if you aren't planning on seeing the film, I'm sure leaving this site is sound advice regardless. Even if life is a limitless plain of time and space....

That said, here are the Yays and Boos. Or is that the Boos and Yays? At this point, I don't think I understand the order of just about anything, anymore. Though Arrival may have little to do with that, actually...

It seems now more than ever, being able to communicate with unlike creatures is paramount to the survival of our planet. We can try to listen to each other, try to understand the finer points of messages...or we can simply blow everything to Hell. And honestly, there's part of me that doesn't care either way, as the problem seems entirely out of my hands at this point.

Just let me know that my kids are going to be okay...okay?

Wait. I don't like knowing the endings ahead of time. Which is good. Because I don't plan on being around for their's anyway.

Email ThisBlogThis!Share to TwitterShare to FacebookShare to Pinterest
File this under This Isn't How I Go (to the movies)