There's always a bright side!

As a kid, coming home covered in it was likely the sign of a very good day at school. Probably made something really nice for mom to stare at for years to come.

As an adult, coming home covered in it was likely the sign of a very good night after work. Probably stared at a really nice mom while trying not to...nevermind.

If there's one thing in this awful world that makes everything it touches infinitely better...

...it's glitter. Lots and lots of glitter. 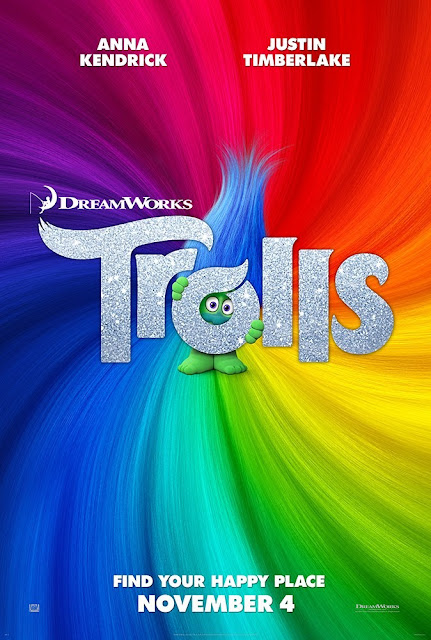 Movie God may strike me dead for even typing the words (and the blogging community may stone me in the streets), but I doubt there will be a movie I enjoy more this year than Dreamworks' Trolls. Arguably the most consistently charming film I have ever seen, this little animated flick was exactly what a post-election crowd needed: an effervescent rainbow of joy suggesting, no, demanding, that no matter what, if we work together, everything is going to be okay.

The Bergen are a miserable race of hideous creatures slogging through a joyless life (no, they're not public school teachers [I checked]). Soon, it is discovered that these sorry bastards can actually get a taste of happiness simply by eating a Troll. The Trolls aren't exactly thrilled with this, and get the Hell out of Dodge right before the annual Troll-eating holiday (uh, Trollstice) commences. Their escape, is literally balls out.

Twenty years go by and while the Bergen's lives have somehow gotten shittier, the Trolls, despite being borderline homeless, have overwhelmingly prospered. Seriously, these day-glo f--kers perpetually exist in the raddest rave ever (assuming, of course, your idea of a kickass soiree is scrap-booking and elaborate dance numbers where everyone is high as a f--king kite...on positivity). If you don't smile during at least one of their jams, do the rest of us a favor, and find a bridge to live under. Or a wall to build.


Things were going, like, extra groovy for the Trolls, when a rogue Bergen unfortunately crashes the shindig and captures a half-dozen of the quaffed goofballs and crams them in her massive fanny-pack. It's up to a select group of do-gooders led by Princess Poppy (Anna Kendrick, somehow more adorable than usual) to rescue the gang and make all right in the world again. Regrettably tagging along on this doomed mission is Branch (Justin Timberlake, somehow as awesome as usual), the one Troll not exactly eager to pitch in, whether it's to lend a hand or drop a beat.

Look, I get it. You're sitting there in your luxurious wheeled-chair, petting your miniature dog and furrowing your impressive brow at how any reasonable adult could enjoy even a minute of something as awful as a movie featuring those scary things from that scary time. But guys, I'm telling you, this f--king movie rules.

Maybe it won't if your little daughter hasn't asked you, Daddy, who's your favorite Troll? or What Troll are you going to be for Halloween? every single day since you've seen it, but mine has, and it's cranked the good vibes to eleven. We rolled in six-deep last Sunday and the only thing upsetting about this film is we couldn't agree who loved it more (uh, and we took my mom [and since the election? She f--king hates everything]. It's not a Pixar movie, for f--k's sake, but not every animated film needs to be, you know?

Speaking of exhausting, impossible precedents, here are the Yays and Boos. I have officially given up on saying that's a terrible idea when any of these random movies are announced. If Trolls can be good, who's to say the Tetris Movie Trilogy won't be great, too? You know, outside of everyone walking the planet.


Outside of you (uh, and you) readership has plummeted around here. Like, all-time lows. Clearly, reviewing and totally vouching for Trolls isn't exactly going to set the internet on fire, but screw it. I'm going to stay positive and keep on doing my thing. Maybe even sing a song while I'm at it.

In the shower, of course.

Where I can hopefully, after a week, get all this damn glitter off. Finally.
Posted by m.brown at 10:09 AM

Email ThisBlogThis!Share to TwitterShare to FacebookShare to Pinterest
File this under Hair Today Gone Tomorrow?