Your parents were obviously total failures.

My son is in second grade. Well, he was, as the school year is already over for that lucky punk. Me? I have to trudge along for another couple of days.

There are a ton of things to worry about when you send your little one off to school, and as a teacher I'm privy to some super-sketchy insider information, but my wife and I routinely find ourselves fretting over one thing in particular.

We're not sure he has any friends.

Which is entirely brutal no matter how you look at it, but unless this dude's pulling a major Keyser Soze on us, I'm telling you, what breaks my heart in half? 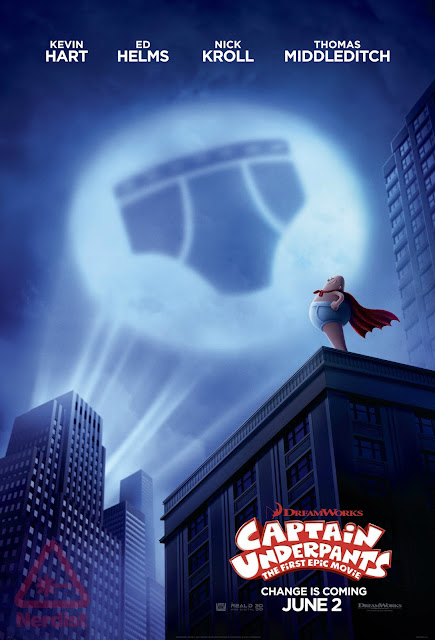 As are George and Harold, the two main characters in Captain Underpants: The First Epic Movie. Well, they're at least really nice to each other. If you're a teacher, or worse, a principal, you might not be such a fan of this dynamic duo.

But somebody definitely likes these boys, to the tune of over 70 million books sold. Based on the wildly-popular series of kids' books by Dav Pilkey, this animated flick, while typically hyper-active and full of fart jokes, is shockingly (and pleasantly) a very nice story about friendship. After the dumpster fire that was the previously unmentionable kid's flick [review], my sites were pretty low...which may explain why I enjoyed the movie so much.

George and Harold have been in the same class for years. When they're not fighting the injustices of how boring and soul-sucking elementary school can be, these two goofballs are up in a rad tree house concocting yet another adventure of Captain Underpants, their homegrown comic book character.

After yet another prank has their principal Mr. Krupp threatening to separate the boys into different classes (and in their minds immediately ending their life-long friendship), George and Harold end up, of all things, hypnotizing the disgruntled head-of-school. Instead of a worst-case scenario, now our guys can instead focus on being best friends again. And endlessly embarrassing their principal along the way.

While the humor is laser-focused on eight-to-nine year-old boys, Captain Underpants: The First Epic Movie somehow manages to be a solid crowd-pleaser nonetheless. The humor, pacing and overall look of the film, all help to perfectly capture the goofy and imaginative world of what it's like to be a kid. Or, at the very least, a young boy (little girls are waaaay smarter then us rock-throwing, fart-sniffing morons). I'm not sure I ever had a friend as good as either George or Harold (I had older brothers...which may have scared some of the nerdier types off), but I could certainly appreciate what these two dudes shared. And judging by his emphatic 10! ("I loved that movie!"), I think my son did too.

Speaking of things that I basically/magically created with my wiener, here are the Yays and Boos. I keep hoping that I can get a break from all these kid flicks, but sure enough, Cars 3 is soon to be staring me in the face, or parking on my neck, depending on how you want to look at things.

Lately, time for blogging and coherent movie watching (more on this later) have each been damn near impossible to come by. The NBA and NHL Finals ate some of my delicious time, my brother Bryan's annual visit (more on this later) took its share, but the number one culprit for essentially murdering Two Dollar Cinema? My son's baseball team, the Pirates.

Yep, ol' m.brown has been not only dealing with kids all damn day, but now he's coaching them at night, too. Wait, what? You seem like a reasonable person, Blogger Guy... I know, I know. But when you have kids, you do a lot of dumb crap.

But guess what? Matty was selected to represent his team in the All-Star Game. Awesome possum, right? But what might be even, uh, awesomer? He was selected by his teammates.

(and maybe the kids at his school are a bunch of stinky a-holes)
Posted by m.brown at 2:54 PM

Email ThisBlogThis!Share to TwitterShare to FacebookShare to Pinterest
File this under Look Under There!