This place really is the worst.

Unless you have kids, or work with them (or in my case, both), you might be blissfully unaware of the influences quietly molding the future leaders of our country. And I would argue, vehemently, that your lack of knowledge about the latest trends and fads makes you a better person. Because knowing what passes for the best thing ever, might make you want to kill yourself...

...with a fidget spinner. 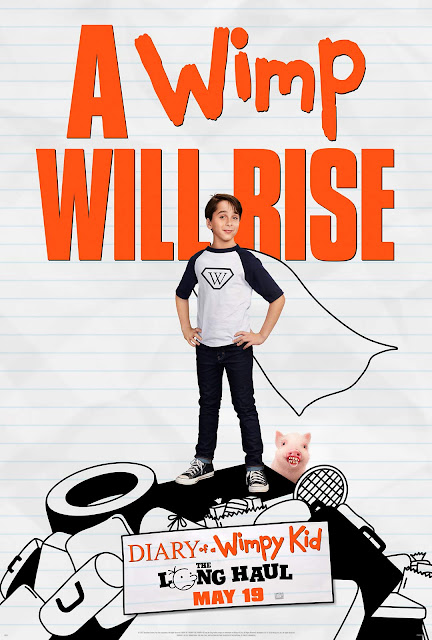 If you have, know, own, or just the worst, are an elementary school student, you're likely all about Jeff Kinney's Diary of a Wimpy Kid series. As a mostly-functioning adult, however, I've never read a single page of his eleven (or so) books featuring the douchey awfulness, er, wimpy-ness of one Greg Heffley. But my students have. And more importantly, my son has.

After bitterly not sleeping through Diary of a Wimpy Kid: The Long Haul, the fourth film in the franchise, I'm starting to rethink my ludicrous stance of taking my son to any film he's legitimately interested in seeing. Like, majorly reconsidering. See, I'm trying to foster a healthy love of actually going to the movies (the day he illegally downloads a movie is the day we have an actual fist-fight) in both of my kids, but after director David Bowers 'film', maybe piracy isn't the worst thing in the world. I mean, that way he would have only been stealing an awful movie. But this? This robbed me of my f--king soul.

Not that you care, in the least, but here's a short summary of The Long Turd Haul. Instead of allowing her three boys to just lay around all summer and be annoying a-holes, Mom decides the Heffley's need to load up the car and head out on an epic to visit their beloved Meemaw. They're going to get off their devices and spend some time as, you guessed it, a family.


As bad as this idea is in reality, it's even worse in a shitty movie. Not only is the original cast replaced with way-less likable actors top-to-bottom (though Alicia Silverstone in reading glasses has a certain adult film charm), but almost every single minute of this road-trip movie made me long for a texting high-schooler to come along and end it all. The jokes aren't funny, the running gags beyond terrible, and the series of unfortunate events unfolds like an infinitely worse version of Vacation [review]. The new one.

You might not know that the young protagonist Greg is the worst person alive (uh, he is), but the Yays and Boos sure do. After this one, they've drawn a line in the sand with crappy kids' flicks. Okay, their drafting their line in the sand, as the Captain Underpants movie comes out this Friday. Though, don't worry, I'm taking him to Wonder Woman instead.

I have exactly eight and a half days until summer vacation, where the thoughts and interests of middle school students will be, quite literally, the furthest thing from my mind. Obviously, my son will still be around, so I can't just watch adult movies and sniff glue for ten weeks straight. But, I can take him to other movies, show him what a decent plot looks like, and that there are jokes that don't involve farting animals.

Maybe we'll even watch a good flick when we're away at the beach. The beach that's a three-hour drive away. The beach where we'll go and spend some much-needed family time together. With her parents.

I'll start charging the iPads now.
Posted by m.brown at 11:08 AM

Email ThisBlogThis!Share to TwitterShare to FacebookShare to Pinterest
File this under The Road (Trip) to Nowhere Leads to Me