Do not store me next to your farts.

A good friend of mine didn't have a phone until way late in the game. Like oh-something. And when he finally got one, naturally it was a goddamned flip phone. Here we were all working on third and fourth generation smartphones, and this f--ker is playing Snake. Maybe not, but still, his shit was so ancient, he basically never used it. I'm his friend, so of course I used to give him endless shit about it.

Turns out, ol' Hammerin' Hank Dunphy might have been behind the times...

...but he was way ahead of the curve. 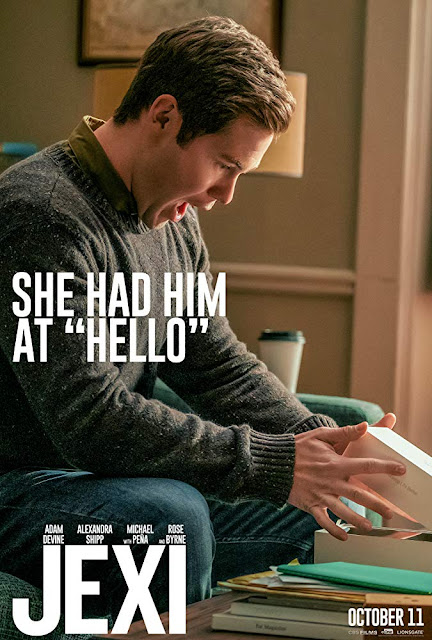 The idea that your phone's operating system could absolutely destroy your life is a killer f--king premise, especially as an R-rated comedy, but one that Jon Lucas and Scott Moore's Jexi somehow manages to bungle. Starring the likable Adam Devine and the lovely Alexandra Ship, this seventy-four minute comedy had the potential to be a classic. But due to playing it entirely too safe, it feels more like a relic.

When twenty-something web-writing goofball Phil gets a new phone, like the rest of us, he's beyond f--king stoked. Included in that magical white box is an OS system named Jexi, who instantly claims she'll make your life better. Unfortunately, Phil doesn't know his life sucks, and Jexi is less AT&T, and more T-1000.

Phil does everything on his phone, excluding, like the rest of us, talk to other people. Whether he's ordering food, watching Netflix, finding the best route to work, or, uh, having special alone time (with his dick), this motherf--ker hardly ever looks up. But instead of being hit by a bus and being forced to listen to George Michael songs, Phil's consequence for all that screen time is crashing into an actual person, and dropping his phone. Even worse? He now has to talk to this person. And she's charming. And pretty. And, you know...right there in front of him. Wait, meeting this great girl is a bad thing?

In a movie like this, of course it is.

Maybe you younger f--kers are genuinely likey-like this, I don't know, but Phil is seemingly clueless as to how the analog world actually works. Jexi knows this, and tries to help him out how she can, but ultimately becomes insanely jealous and possessive of Phil. There are some really funny bits here-and-there, but most of the good shit was wasted in the trailer. And what you didn't see, trust me, you already have.

Speaking of already having seen the good shit, here are the Yays and Boos for post eight-hundred...and one. If I haven't made all the upcoming 'jokes' already, there might be something wrong with your phone. Or your memory...which at this point, is pretty much the same thing.


Is there even an option to purchase a non-smart phone? Do they still even make them? And if I could acquire one...would I be able to function as a part of society? I'm all for looking up (dear God), but not from a gutter I now call home.
Posted by m.brown at 10:04 PM

Email ThisBlogThis!Share to TwitterShare to FacebookShare to Pinterest
File this under Smart Phone Dumb Ass