I mean, who buys this stuff?

When my middle school 'girlfriend' (not really, I was too much of a wuss) moved away after eighth grade, she sent me a letter (ah, the past) after arriving in San Francisco. I don't remember much of its contents, but there was a bit in there that I will never, ever forget.

She was such a sweet girl and toward the middle she said something to the effect of, I was missing you so much, but then I heard our song and it made me feel it was going to be okay.

I mean, that's sweet and all...but...who the Hell likes George Michael that much? 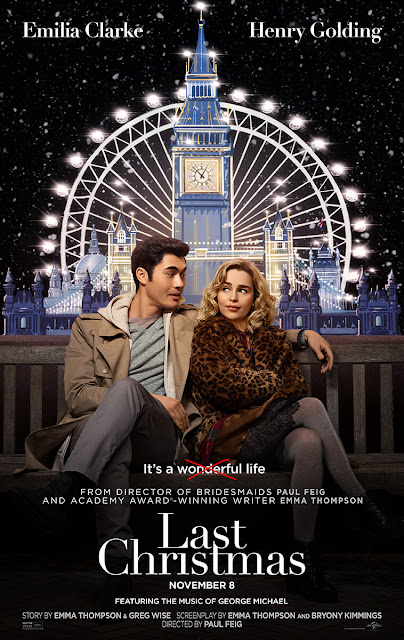 Apparently, Emma Thompson does, a lot, and after what I imagine was a merlot-fueled bender for the ages, cooked up the idea for Last Christmas. Allegedly based on the music of one half of Wham!, upon further review, it seems more like one half of one song from one half of Wham! was the real foundation for this...but hey, who's counting?

Unseating Zooey Deschanel as the sexiest holiday retail employee ever is Emilia Clarke, here playing Kate/Katarina, the lone employee at a year-round Christmas shop. The job basically sucks, even if it's just about guaranteed that a painfully mysterious man will drop in to jingle your bells.

For her boss, Santa (if only I was joking), this international man of mystery turns out to be Mr. Bean's stoic accountant, Boy. And for Kate, it's this chipper fellow in really tight tan pants, Tom. Tom and Boy? Welp, it's been fun. *politely jumps off cliff*

Kate is your typical movie wreck. A person you'd loathe in real life, but adore in a goofball comedy: she's basically homeless, has a dead end job she's constantly on the verge of losing, can't really land a guy (*furiously punches self in sad face/stiff crotch*), and is currently/mostly estranged from her fractured, immigrant family. Good thing it's all presented with quirky hilarity, so much so it's borderline enviable. But if I can be frank, what the bloody f--k is this? It's not that I expect her to be trafficking meth in her hollowed-out uterus to make rent, but the way these problems are handled is a bit, well...much.


But we're all savvy, right? Everything about Kate only bumps the glittery Holiday-Movie Tomfoolery Meter to 'moderately acceptable' (as opposed to something on the Hallmark Channel, that inevitably sends the meter into such fits the dial flies off and kills an onlooker). If you somehow stumbled into the theater expecting a heavy dose of reality with your large popcorn and M&Ms, feel free to bicycle your Grinchy ass in front of the nearest passenger bus.

But if you're down for just saying f--k it, and watching the cute people do cute things, well, have I got a movie for you! Thompson and director Paul Feig take every holiday rom-com ever, juice them, and then proceed to strain the results through the sweaty underwear of M. Night Shyamalan.

That probably doesn't make sense...but it will. Alright, fine. It might.

(That was your warning, f--kers, as the Yays and Boos, like a Trump family Christmas stocking, will be quite spoiler-filled)

My middle school girlfriend, who shall remain nameless, ended up going to college in Connecticut, right down the road from where I was going to college. I think, at one point, I bumped into her on the street and it was like, Holy shit! What are you doing here? This was before I had met my wife, and I was just an idiot sophomore or something (but they would end up interning together, which is weird). We eventually hung out together...once...at a Yale/Harvard game. If I had been thinking clearly, I would have reminded her of our middle school love song. The one by George Michael. You know...


I Want Your Sex.