In September of 1964, a little show about an exceedingly strange family debuted on network television. This family had all the hallmarks of a typical sitcom household: bumbling but good-natured dad, practical and attractive mom, a pair of oddball kids (one boy and one girl) and, of course, an mysterious relative complicating matters...hilariously. *insert laugh track*

It was pretty typical stuff, funny and light, except for the fact that this family was more than just a little bit different: they dressed in all black and look like something out of a horror movie. 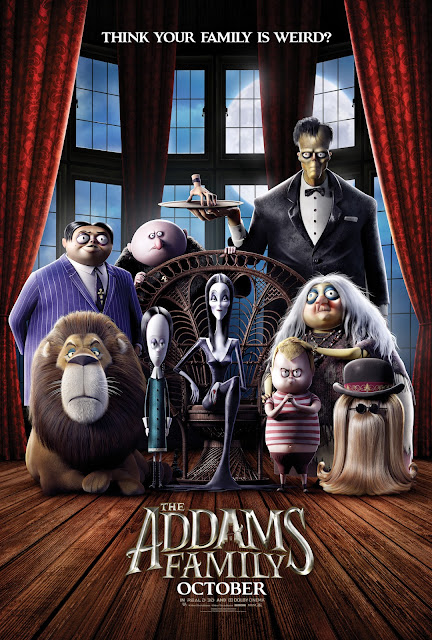 Of course, I'm talking about one of my all-time favorite shows The Munsters, which debuted six (six!) days after The Addams Family but somehow hasn't had the lasting impact Uncle Fester and Pugsley have. Whether it was the moderately charming 90's flicks with Christina Ricci and M.C. Hammer, or this latest animated update, Morticia and Gomez Addams, for whatever reason, won't (/can't?) go away. But, uh, maybe they should?

Unbelievably stellar voicecast aside (Isaac and Theron rule), there's little to enjoy in The Addams Family. And even though there will never be anything better than Fred Gwynne's Herman Munster, I gotta admit, I was rooting for this one. My daughter seemed particularly interested when the trailer dropped, and my wife and I were all kinds of onboard this nostalgia train, but who knew the ride would be so sleepy.

After a wedding goes awry abroad, the Addams flee to New Jersey, where they assume a peacefully weird life awaits them. Unfortunately, the quiet little town their house resides in, is being made over by some reality-show wacko, and there's no way the town can be a dream destination if Pugsley keeps blowing it to Hell. Apparently he's practicing for some ridiculous family ritual known as Mazurka, but trust me, no one cares about that.


Well, my kids cared, at least initially, but as each of those eighty-six minutes slogged by, their interest (and the amount of popcorn we had) waned, and all bets were off. My wife wants to go back and show them the old television show to make up for this misfire, but I think we'd be better served to start with the 90's movies instead. Or, if we really loved them, we'd show them The Munsters. 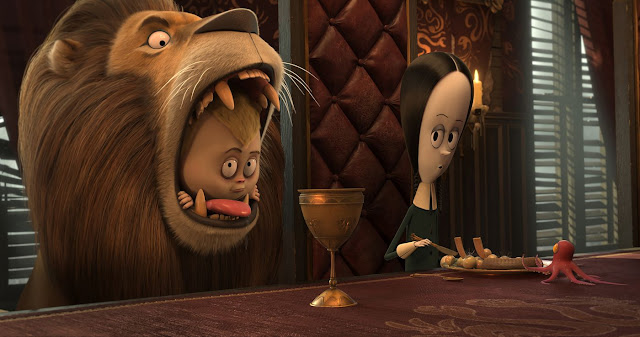 Speaking of that sexy Marilyn Munster -oh, we weren't? - here are the Yays and Boos. Considering I didn't really enjoy this one that much...the number of Yays might be alarmingly high. But remember, even if the movie isn't great...it's still a great time at the movies.

Yaaaaaaaaay!
Boooooo!
So, uh, anyway...I did a little more research concerning the lack of all-things Munsters, and it turns out there was a reboot...back in 2012?...and it crashed and burned. Not saying that I'm surprised, but what could have distracted me so much seven Halloweens ago?

Email ThisBlogThis!Share to TwitterShare to FacebookShare to Pinterest
File this under The One Where Ross Learns He's a Dirty Freak