It's not my first time seeing someone die.

Have you ever found out the year someone was born and you're instantly furious, or are you not a giant creeper idling around nearby parks in your unmarked van? Because let me tell ya, it's the worst feeling. Oh, and I know that awful bullshit that some a-holes say, you know, about age being a just a number and such. But you know what else is a just a number?
The length of a prison sentence. 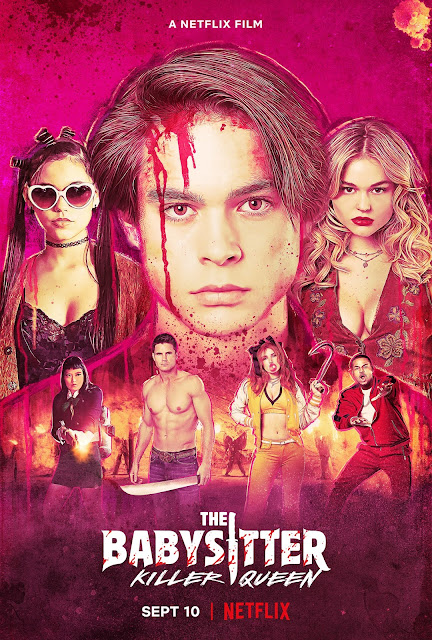 In the first flick, the ultra-ridiculous The Babysitter [review], I spent the majority of the runtime drooling over the lovely Samara Weaving, who played Bee, the titular sitter of babies. Weaving, at the time, was in her mid twenties, so, yeah, I'm a still a perv, but like, the bridge I live under is pretty nice. You should stop by sometime.
This time around, in The Babysitter: Killer Queen, Bee's gone, and the lead actress is Emily Alyn Lind who is also pretty lovely FOR AN ABSOLUTE CHILD. Obviously, she looks young, but typically everybody in movies does (or old, because this is a high school flick), but Lind straight up is a high school girl. *shudder* Her sexiness would have been super appreciated two decades ago. Now, I just feel like an infinitely less charming and handsome version of Matthew McConaughey in Dazed and Confused. Except at this point, I'm pretty much Wooderson's dad for f--k's sake.
Speaking of not alright alright, that's the general vibe from critics regarding this film, with the consensus being it sucks a giant bag of (age-appropriate) dicks. While it's not as good as the first, I still found it an absolute blast and would enthusiastically recommend it. To fellow perverts.
In the two years since Cole straight-up killed the shit out of his babysitter Bee, everything has changed. Okay, fine, nothing has changed, except Cole's an absolute f--king monster (he's, like, doubled in size). While I believe anything people a foot taller than me say, unfortunately, no one buys what poor Cole is selling. Not even his (f--king rad) parents. And when that murderous satanic cult comes back for our dude's untainted blood? At least he'll have his bestie Melanie (Lind, ugh) with him.
Oooh, about that...
Speaking of things that need further explanation, how's about you and I ring the doorbell of the Yays and Boos? I hear they give out the full-size bars, which is surprising. But I'm not exactly sure that's chocolate...
Yaaaaaaaaa...
...aaaaaaaaay!
Boooooo!
At this rate, I think I can probably pull off one or two more horror films before the end of the month (I'm sitting on two as it is), and hopefully, the monsters are on screen holding a knife, not on the couch holding the remote.
Okay, enough. I'm probably being too hard on myself. I mean, I'm just a guy, right?
A creepy, creepy guy.
Posted by m.brown at 11:52 PM

Email ThisBlogThis!Share to TwitterShare to FacebookShare to Pinterest
File this under Think of the children (just not in that way)