Remember a short time ago, when you'd watch an end of the world flick and you'd think, imagine having to stay inside all the time, scrounging for food, barricading yourself in from zombies/weather/sound-monsters/what-have-yous as the government failed you and your family wjile all once-reliable social systems collapsed? Remember when the end of the world was a far-fetched idea that greenlit a movie...

... and not just a story on your local news after one last check on the weather? 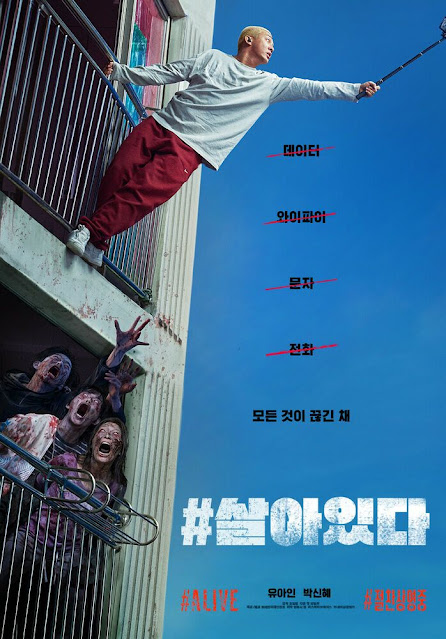 That poster on the left? I'm pretty sure that's featured on Netflix's preview panel for the 2020 flick #Alive, and being the asshole that I am, thought it showed the likely protagonist taking a goddamned selfie surrounded by f--king flesh-hungry zombies. While a movie proudly boasting that idea would, on the right night, certainly be my cup of tea, Il Cho's flick is a bit more serious than that. Oh, it's still an end of the world zombie-infested nightmare, it's just a bit more...quiet? than you might expect.
Joon-woo is a twenty-something streamer living in an apartment with his family. One day, when they are out, the news flashes in the background something about a highly contagious illness spreading throughout the country. Joon-woo, like all characters in these movies, doesn't exactly notice. Well, not until the wifi signal goes out.
Once it's clear that this event is quite the situation, our dude realizes, like I assume many of us would, he's utterly f-ked. He's alone, he's out of food and water, everywhere he looks, flesh-eating zombies are running rampant turning the few survivors braving the hordes. Joon-woo's like f--k it, and decides to kill himself. And I'm not sure you can blame him.
Pretty much out of nowhere, in what should have been his final moments, someone lets Joon-woo know he is, in fact, not alone. With this mystery person in play, Joon-woo not only has the ability to live, but also a reason to, um, too. It's all kind of hokey, no doubt, but the admittedly clunky/slow-burn love story kept me engaged. Especially when they took it to the streets.
What should probably be left in the streets, are the Yays and Boos. But it's hard you know? I mean, these two are like that member of the party who has been hiding their zombie bite from the rest of us. Yeah, they'll eventually kill us all, but there's some weird level of honor in that betrayal.
Yaaaaaaaaaay!
Booooooo!
Even though it's the 20th of October, I don't think I've got many more 'scary' movies left in me. Up next is a certain box-office shocker from earlier this year which definitely could be classified as something to watch at Halloween, but I think the streak ends there. I really want to see the new Borat movie, and that f--ker drops on the 23rd.
Though, from the trailers, it looks like Trump supporters are going to be prominently featured, so scratch that - the streak continues.
I mean, those f--kers are terrifying.

Email ThisBlogThis!Share to TwitterShare to FacebookShare to Pinterest
File this under Son...she said...have I gotta little story for you