I should be the one that's writing angry letters!

I get it. I do. It may sound strange to you...but I'm cool with it. It's just how some of us deal with things, I suppose.

See, in a way, I also write letters to the universe. But I write mine because I have kids, you know? This dumpster fire you're currently standing in is a gift for them when I'm gone (Dad, you shouldn't have. Like, for real. Stop.), whatever the circumstances may ultimately be.

Yet, even though no one owes me a response, I'm not gonna lie: I certainly welcome it. 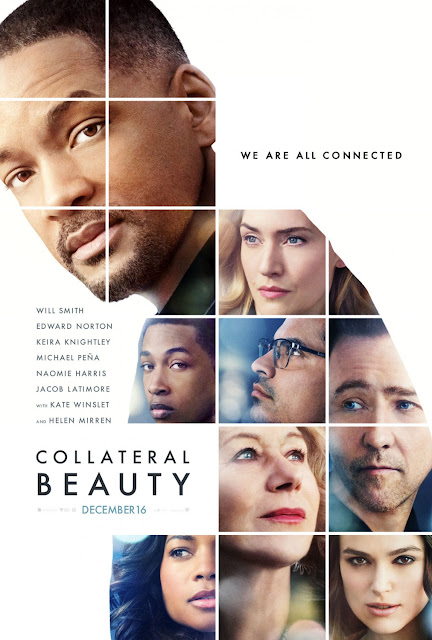 Collateral Beauty is the 2016 bullet point on Will Smith's resume of annual holiday-season/feel-bad movies. Released this past Christmas, the once freshest of princes plays Howard, a father still mourning the loss of his young daughter to cancer. Howard hasn't moved on, and we find him quietly drifting through his life at the film's outset.

Personal tragedies are typically just that - personal - until three top execs at Howard's company have finally had enough of his downward spiral. Turns out, it isn't exactly top form that their former fearless leader spends days in his picturesque office setting up and knocking down dominoes. Oh, it's totally rad, sure, but cost-effective it ain't, and they decide to walk the dangerous path of proving he's mentally unfit to steer the ship.

Knowing their boss has actually written letters to the universal concepts of Life, Death and Time (the former benchmarks of their advertising firm), these three kooks cook up a wickedly deceptive, three-step plan: 1) hire three actors to play Life, Death and Time 2) film their interactions with Howard on the streets of NYC and 3) digitally remove the actors making Howard look like a f--king psycho.


Yeah, I kinda rolled my eyes too, but with a cast this fantastic and ninety-four minutes to spare, I basically went all in on Collateral Beauty. Sure, it may be sappier than a Lifetime movie about disabled puppies at Christmas, but I found it thought-provoking enough to be enjoyable, even if I was left utterly bewildered at the end.

Oh, and that end? Well, I might be the only person on the planet who didn't see it coming, but it wouldn't be the first time that something impossibly obvious flew directly over my thick head. Still, you can go ahead and f--k off with those Really?-shaped eyebrows jutting off your lovely face, okay? Some of us aren't that smart, and instead have to settle for being impossibly handsome. Or liars.

Look, I might be a moron passively staring at the flickering light box mounted to my living room wall, but sometimes my heart gets in the way of my head. Shitty movie or not, get me thinking about losing either one of my little kids to a mystery disease that no one saw coming and whether you deserve it or not, you've got my attention.

Speaking of bittersweet endings, here are the Yays and Boos. Ultimately, we're not that mad that Smith keeps pursuing that little statue every December. Honestly. But we're stoked as Hell that in 2017 he's chasing something very different this time around [holy shit!].

Writing this blog for (the adult versions of) my kids (and you, dear reader), isn't the easiest thing to do. You're all essentially these unseen forces I feel in my heart, but never see with my eyes or touch with my hands. So, if you don't necessarily exist...does it make sense to keep writing to you? I don't want to end up the crazy guy that people film in the subway.

It seems like I'm a bit of a crossroads here, doesn't it?

Email ThisBlogThis!Share to TwitterShare to FacebookShare to Pinterest
File this under Wild Wild West Side Story