Bad news, baby. It's not going to be okay.

When the manager of my local theater called me last Friday, I was totally rattled. I figured he was reaching out to all of the [potentially] infected, but instead he was asking if I could come in about a half an hour earlier. Turns out no one else had bought a ticket, and he was thinking he could get his staff home just a little bit earlier if they could move my 10 o'clock showing up.

That's very nice of you, but, uh, how about I stay home altogether and you guys get out even earlier?

He laughed, but informed me that there was another late show with actual paying customers, so whether I showed or not, they wouldn't be getting out any earlier if I stayed home. He then sweetened the deal with whatever snacks I wanted, free of charge.

The whole conversation had me thinking. Is it smart to go to the theater right now? But you'll be the only one in it. Exactly, because you know this movie sucks ass. But you love shitty movies. This is dumb. You're dumb. Stay home. But...Henry. He's so nice. And this might be the last time you go to a theater for a very long time.

Needless to say, there was a lot running through my head...while I hauled ass to the theater. 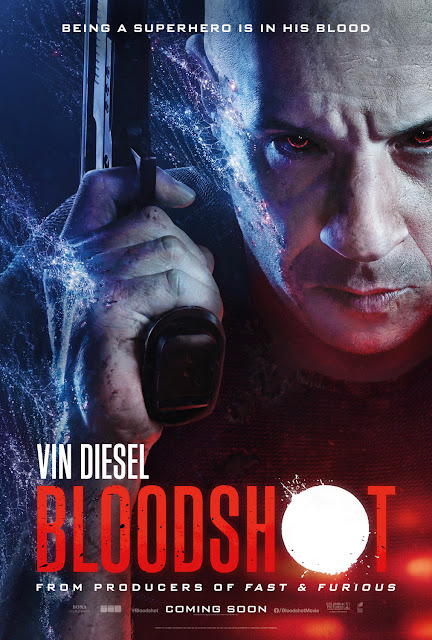 I didn't know about the existence of Bloodshot before my older brother Bryan showed me the trailer late last year, yet here I was, alone, disinfecting my stadium seat (and the adjacent ones at that). Being that Bry was so stoked with the premise, not to mention the promise of this latest comic-book flick (especially when Vin gets his face blown off in slo-mo to close the trailer), I immediately recommended we watch Upgrade [review] which seemed to be cast from a similar mold. And while there are easily identifiable similarities, let's be honest with ourselves: who the f--k cares? DID YOU SEE WHAT HAPPENED TO HIS FACE?!?

Vin Diesel is not Groot, but instead plays a soldier named Ray, who after watching his sexy lady murdered directly in front of him, is himself shot in the head and killed. Or balls and wounded. It doesn't matter.

What might matter, is that Ray is somehow saved, and now enlisted in a super-secret super-soldier squad. Training with his insanely hot partner KT, Ray quickly learns he's basically a deadpan Deadpool, strong as f--k and capable of instant regeneration, assuming shit goes sideways. Heading the program is Guy Pearce, which doesn't do anything to dampen the Memento-vibe, which may or may not have been thrust our way intentionally.

Definitely deliberate, is this built-in malfunction that Ray's been, well, equipped with. Every single time he reaches a certain point with KT, he remembers his dead wife and the man that killed her. He snaps, breaks out of the training facility, and straight up murders the guy who did it. Wait, what do you mean every time?


I don't know, and neither will you, likely ever, as this movie wasn't really headed anywhere, honestly, and that was before this f--king pandemic closed movie theaters around the world. If you end up seeing this, it will likely be on VOD or Disney-, and frankly, that sounds about right. It's got some rad action scenes, it's got Eiza Gonzalez, and of course, it's got Vin being Vin. If any of those things make your Peter tingle, then you'll probably have just enough fun with Bloodshot. I was literally in a theater of my own, so I had a pretty good time, but couldn't imagine ever sitting through it again. But at this rate, I'd be happy to just get the chance.

Speaking of things we should all be thankful for, here are the Yays and Boos. I mean, if you're reading them, you know your WiFi still works.


Yaaaaaaaaaay!
Boooooooooo!
I hope you are doing well, wherever (and Hell, whoever) you are. Not going to the movies sucks, sure, but clearly we've all got bigger fish to fry. Well, assuming you bought fish before you were ordered to stay in your house for the next couple of weeks.

I've taken the time to try to enjoy more movies at home, specifically more movies with my kids, because I'm lucky enough to not have to worry about work (and money)...just yet.

If you ever find yourself in Pennsylvania, the next movie's on me. But the snacks?

Email ThisBlogThis!Share to TwitterShare to FacebookShare to Pinterest
File this under Oh Henry!