We don't all have claws.

If I asked you to name the comic book character most faithfully realized on the big screen, who would you choose? It's Batman, right? Likely followed by Superman or Spider-Man, I'd think. And while I feel each of those characters have kicked all kinds of cinematic ass, I'm throwing them all out on a technicality, as only a super nerd (who um, doesn't read comic books) would dare. Each of them has been played by more than one person, muddying the waters. With my newly instituted/highly arbitrary criteria, we're down to two: Iron Man and Wolverine. While I'd go to bat for Robert Downey, Jr. anytime, when I think about, there can be only one. 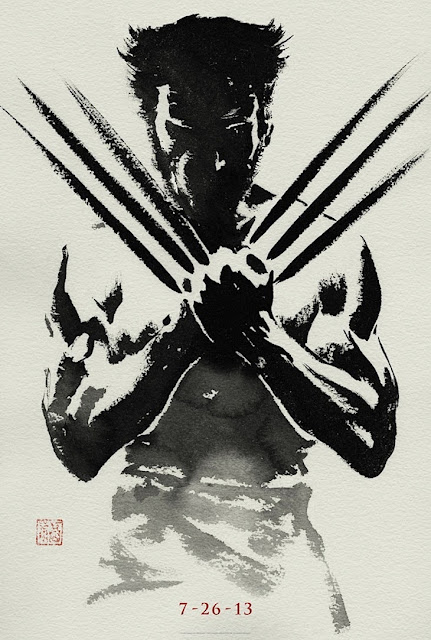 Hugh Jackman has been playing Wolverine for almost fifteen years. Ridiculous. And throughout that span, Jackman has dusted off the CG claws again and again and held down major roles in four films, and even had a kickass cameo in a fifth. His latest entry, and certainly not his last, is The Wolverine.

I'll tell you up front, I've never seen X Men Origins: Wolverine. I heard that it basically sucked and have somehow managed to never catch it on FX, where it's seemingly on twice a day. That said, I had every intention of watching it prior to seeing the latest Wolverine flick, but it wasn't in the cards. And being that my wife was due the day after this one released, I honestly thought I'd never see this one either.

Clearly, I ended up catching this, and perhaps less obvious, I'm glad I did. Even if, overall, the film lacks action, I firmly believe you simply can't go wrong with Jackman. Watching him growl each line, occasionally stab a bad guy in the neck, and generally skulk around like an aging gunslinger, the guy is Wolverine. Even in a medicore-at best summer action flick.

Email ThisBlogThis!Share to TwitterShare to FacebookShare to Pinterest
File this under Godzilla Ain't Got Shit On Me!, Tokyo Drifter

Of all the kids I have taught, there was this unforgettable young man I had early in my career, Jules. Jules was a pudgy, extremely introverted 6th grader at the time, and barring any setbacks, academic or otherwise, should be headed to college in the next few weeks. Jules never said a word, and always appeared to be diligently working. The thing is, all he ever did was draw. Shapes, lines, letters, cars, ninjas, whatever - Jules would put his head down and get completely lost in his art. Initially this frustrated and infuriated me, as Jules failed to complete anything. When I would question him (or even step in his direction), he would furiously erase whatever he had drawn. Even when I kind of accepted it, and eventually encouraged it, Jules would always apologize and say Sorry, Mr. Brown. I'll start my work. I'm sorry, while vigorously erasing/ultimately decimating his paper.

I didn't know it then, but I now know exactly what Jules needed to help him snap out of it. In fact it's the thing that gets most of us (in and) out of trouble. 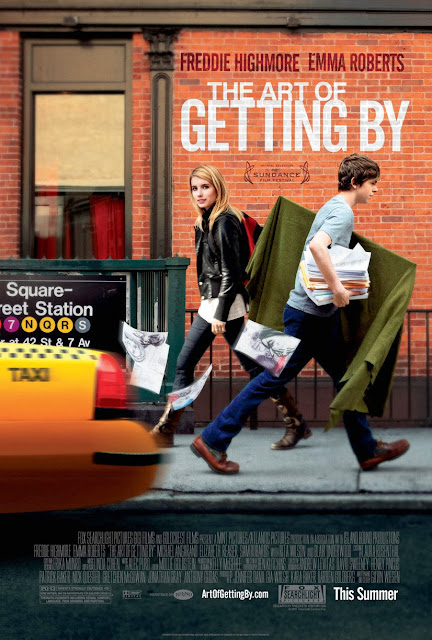 If you weren't that kid who couldn't quite function in school, it's likely you knew him. The Art of Getting By, from writer and director Gavin Wiesen, tells the story of George, a high school senior. George, played by Freddie Highmore, is a relatively shy oddball, who despite being pleasant and well-mannered, can't get his shit together. He's not a bad kid, he just doesn't seem to care. About anything. And while part of you just wants to grab him and shake him endlessly, there's something frustratingly intriguing about him, too. I'm telling you, Jules was this kid.

As so often happens, the tiny world that George is possibly okay with gets knocked on its ass by a pretty young blonde named Sally. In a typical guy-move, George covers for this girl, despite likely never having even said a word to her in his life. Luckily, she rewards his misguided chivalry with some awkward conversation and the two become friends. They hang out, skip school, do typical cool-kid New York movie bullshit, and things seem to be going fine. Foolishly, and in a maneuver that too many guys have unsuccessfully attempted, George shuffles along claiming nothing more than friendship. This f--king guy isn't passionate about anything, except maaaaybe his artwork. Even that he seems ultimately indifferent toward.  But then friends, things change. That blonde friend of his? That blonde female friend of his? Well, she decides to start hanging out with another guy. They might even be having sex. Ol' passive, drifting-through-life Jules George? Well, I'll let you guess what he does.

Email ThisBlogThis!Share to TwitterShare to FacebookShare to Pinterest
File this under The Jules of Engagement

This parenthood thing. Oh, it's a disaster.

If it ever comes up, I'll say that I applied to two colleges, though I might be exaggerating that tally by one. If I remember correctly, everybody in my graduating class (of thirty-three) had to apply to the nearby University of Hawai'i, whether we intended to go there or not. It was a lone piece of paper, where we checked some boxes and signed our names on the back. Seriously. Where it went after that, who the f--k knows, so, let's officially label that one as a possible application. The other one? Well, I was accepted right away. And clearly, it's worked out for me. I mean, I write a blog. 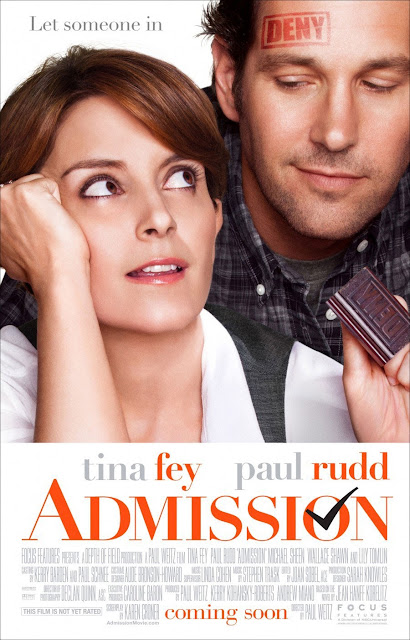 As our first movie since my wife delivered our daughter Violet, I thought Admission was going to be perfect. Since day and night have blended into she pooped again? my original plan was to Redbox the shortest friggin' movie in the machine and pray to Jeebus that I could finish it. But as the sweet smell of freedom/gasoline swirled around me at our local Royal Farms, so did the feeling of guilt. I had to include my wife, even if I knew there was no way in Hell she would finish it. And who better to entertain my hero than her hero, right? Well...

Turns out Admission isn't that good. Kind of at all. Despite starring two incredibly likable and talented people like Tina Fey and Paul Rudd, there's something incredibly off about the entire flick. Frustratingly, we spend too much time with characters we don't really care about (I'm looking at you Mom), and not enough time with those we do (Rudd). Fey, who can be hysterical, rarely gets to let loose as she plays the straight-laced tight ass, Portia. Whenever she finally explodes, it feels forced and surprisingly, extra ridiculous. Potentially the biggest offender however, is the the fact that the whole damn movie, revolving around someone who is a f--king wizard with forms and applications, allows a typo (or a smudge?) to knock everything on its ass. Maybe that's the point of the whole thing, or maybe the whole thing doesn't have a point.