Did you ever play the video game Sega Bass Fishing? Or more importantly, the sequel Sega Marine Fishing? It's so good, you guys. So. Good. You throw the thing in the water, the fish bites it, you jerk the controller around, pound some buttons, and boom! You catch a fish. A…um, virtual fish.

And while maybe this isn’t something I should admit publicly (f--k it, I’ve admitted to much worse), I played the absolute shit out of these games. But as much time as I’ve spent with these, uh, fishing simulators…

…I never made it to the level where I got to f—k Diane Lane. For money. 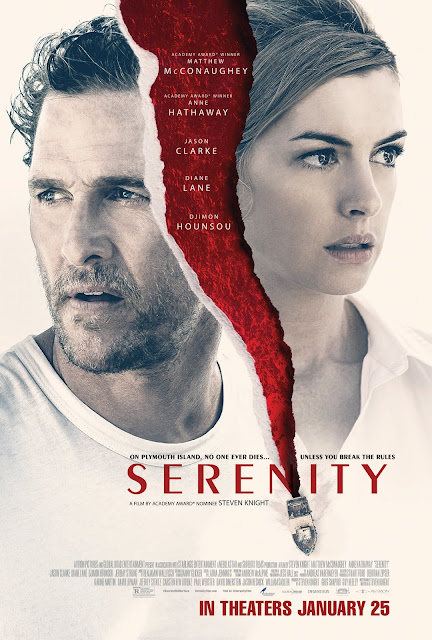 As much as I would have preferred to just aggressively mash my genitals against this keyboard for a half an hour, instead, I’ve decided to attempt something much more painful – to produce a coherent review of Serenity, the French Bulldog of modern cinema.

Somehow existing when it absolutely should have died off years prior, I’m still utterly baffled top-to-bottom regarding this (not at all steamy) piece of science/pulp fiction. I was so shaken afterward, upon arriving home I curled up and went to sleep like the older brother in Hereditary [review]. I mean, Matthew McConaughhey’s career was just trying to get some fresh air, you know?

Ten seconds into Serenity, you can feel it in your soul that this will be an absolute shit-show. The film opens with a tight-shot of a teenager’s face, and the camera swooshes deep into his eye, seemingly entering his adolescent brain. While that alone is the reddest of red flags, I’m assuming the filmmakers felt like they owed us this from the outset, as each of the next one hundred and three minutes is even more f—king bananas than the one that preceded it. And the only possible thing that could possibly explain any of it? Is that some d-hole kid is imagining whatever is on screen, while, one can only assume, masturbating vigorously.

Email ThisBlogThis!Share to TwitterShare to FacebookShare to Pinterest
File this under Rated N for No One

And if you think celebrating love is a waste of time and money, shit, what about honoring forty-five(ish) predominantly white guys that a large percentage of people would have never f--kin' voted for in the first place? That doesn't sound like too much fun, either.

Two Dollar Cinema, I'm asking you to help me celebrate President's Day (with a dash of Valentine's Day love) by joining me in the Mount Rushmore of Movies blogathon.

So you know what I'm going to do? I'm taking it back. I'm taking 'em all back. For the fourth(ish) time in the esteemed history of this blog, I need help. Your help.

The rules are simple:

To participate, simply choose the top four of anything cinematic and explain why they should be carved into the side of a mountain forever. Remember, these are real people carved into imaginary rock - so choose wisely!

Whatever ridiculous(ly fantastic) monument you dream up will be straight magic, so by all means, let your freak flag fly.

Whether you want to do a Mount Rushmore of Oscar snubs, the top four Zac Efron shirtless scenes, or a tribute to the quintessential films of the 90s, embrace the madness and run with it. Four selections may seem like a ton, but once you get started it can get a bit dicey narrowing it down. Last year, things got a touch ... hairy [seriously], so fingers (and legs) crossed that 2019 will keep it flowing, er, going.

Alas, both the nitty, and the gritty:
I'll be on a week-long field trip with middle schoolers starting in the morning, so I may be a bit out of the loop. Well, even more than usual. And while I probably be wishing I was dead, know that your participation is what will keep me alive in the darkest of dark days ahead.

So, yeah. No pressure.

Email ThisBlogThis!Share to TwitterShare to FacebookShare to Pinterest
File this under This is a National Emergency

Learning is always a painful process.

*turns on the news*
*talks to another human*


Not only did I take the time to watch Lucy, but I also took the time to purchase Lucy, the latter decision still haunting me days later. Because outside of personally suffering a traumatic brain injury that impairs judgement and reason (even more so, assuming that's possible), I couldn't imagine a scenario where I'd find the need and/or desire to watch this f--ker again. But didn't you assume that before you bought the movie, a-hole? There you go, showing off that moderately functioning brain of yours.

In case a super drug culled from expecting mommies has burst open inside of your body and you've been travelling the world as sexy energy ever since, let me break down Luc Besson's 2014 flick for you the best I can.

Even if you already know everything about it.

As played by the infinitely sexy (/ gloriously jiggly) Scarlett Johansson, Lucy, even before her, um, transition, initially appears to be a bit of an odd bird. We find her hanging out in Taiwan with some guy who looks like he's saving up for a moped, and luckily for everyone involved, he's immediately killed. As often is the case when your sketchy boyfriend is brutally murdered, Lucy is whisked away and immediately offered a job. Despite zero bargaining power, she politely declines, a brilliant move on her part, and wakes up with a bag of umbilical cord pills sewn into her stomach. Yeah, that ol' outcome. But even worse, her current captor wants to get it on with her sexy post-hasty surgical self, and when rebuffed he punches her in the gut. Not cool, bro on multiple fronts, which sends the drugs spewing into her body, transforming her into, you guessed it, Neo from The Matrix.

Email ThisBlogThis!Share to TwitterShare to FacebookShare to Pinterest
File this under Rough Knight

This will be my final evaluation.

Seeing a great movie, with a bunch of people? That's an A night.

Seeing a decent movie...alone in a mostly empty theater? When you're my age, that's a B night.

And seeing a movie where you demand some sort of earth-shattering twist ending? Yep, you guessed it. 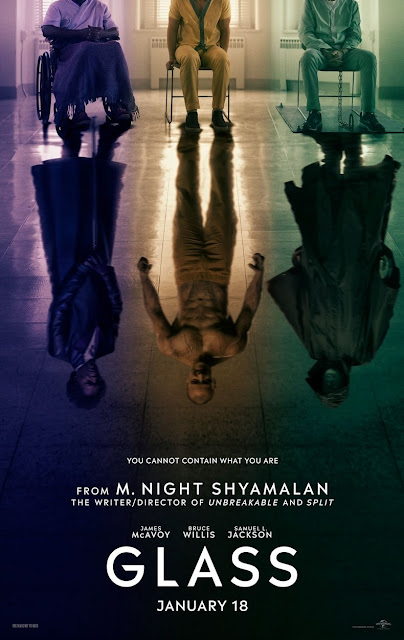 After setting the theater ablaze with the twist ending of 2016's kickass Split [review], writer/director M. Night Shyamalan's tying up loose ends with Glass, (what may or may not be) the final entry in his brilliantly subversive superhero trilogy. Starting (cue LaBamba) in the year two-thoooooooouuuuusand with Unbreakable, this trilogy, is equal parts incredible and inexplicable.  And while I may have been just a tad disappointed with the end of this story, I'm more than psyched at could be next.

But more on that in a bit.

After the reveal of The Horde near the end of Split, Glass opens with an even more grizzled David Dunn patrolling the streets of Philadelphia. He's looking for whatever the Hell The Horde is, and would like to find him/it before four missing high school cheerleaders are served up to the beast as breakfast, lunch and dinner (and fourthmeal, I suppose).

Unfortunately, after tracking down his arch enemy and freeing the girls, the ensuing brouhaha spills out into the streets, and both David and Kevin/The Horde are captured and taken to a psychiatric facility. Along with an totally incapacitated Mr. Glass who's already a resident, all three will serve as involuntary subjects in a hush-hush medical study. The goal? To fix people who share the same seemingly psychotic belief that they are anything than more than regular a-holes from Philly. Meaning? Dr. Ellie Staple, the program's director, wants to de-super these superheroes.
Read more »
Posted by m.brown at 12:15 AM 8 comments: