Assuming, that is, you're desperate enough to ask me. I'll talk to them, I'll feed them (take them to the King of Burgers, in fact), I'll even play with the little goofballs. Shoot, I'll even cleannnnn.....up after them (I'm a dude, so bath time's at your house). The whole nine.

All I ask, all I require, is that eventually, perhaps even as soon as possible... is that you, after whatever it was you were doing that afternoon/evening...eventually come back and get them. 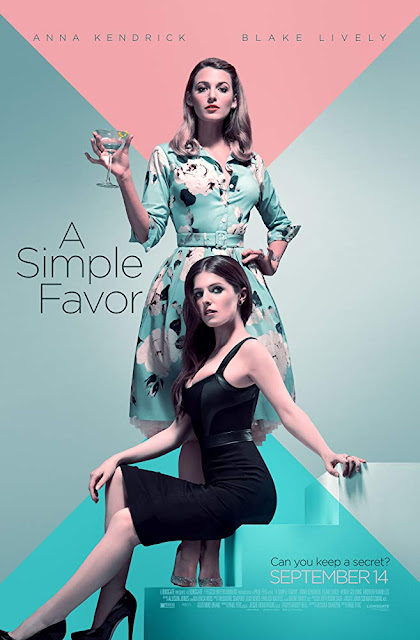 Significantly better than good (but not quite great), was A Simple Favor, the latest film from (cue announcer voice) the dark side of Paul Feig. Based on a novel by Darcey Bell, this seemingly innocuous tale of friendship gone awry, initially presents itself as a bit of a fish-out-of-water comedy. But as the plot starts to unravel, any singular thing you might have penciled in as objective truth dissipates into a bloody handful of glitter, leaving you questioning the actions and motivations of everyone involved.

Anna Kendrick, er, Stephanie Smothers, is your typical small-town movie widow: impossibly awkward yet way too hot to ever truly remain single. Stephanie, a doting mom, runs a moderately successful vlog, but still seems friendless and alone. Cue a mysterious amazon named Emily, skulking about with the heavy-footed grace of someone unburdened by f--ks to give. Steph and Emily (the names of my sister-in-laws, in an odd turn of events) have boys in the same elementary school, and over playdates and mixed drinks become fast friends. Turns out, Emily's gotta head out of a town for a bit, and if wouldn't be too much trouble, asks the astonishingly bubbly Steph to watch her son. Sure. She'd love to. *spits out drink* Wait, you can say that without being sarcastic? Who knew?

Email ThisBlogThis!Share to TwitterShare to FacebookShare to Pinterest
File this under Blunt Emily

I think any father has thought about what they would do in that situation. What action they would take if their child went missing. It's not a game I enjoy, but sometimes my mind wants to play it, so of course, I've kicked it around a few times...

Earlier in the baseball season I lost my son at a Phillies game, after he failed to hear/comprehend the let's head this way command. It was probably the longest forty-five seconds of my life, but luckily that's all it was. He did the right thing and told the nearest police officer that he'd lost his family, and before they could even begin the search, we'd doubled back and reunited.

But my original plan, if one of my kids went missing? The one I've given some thought to? Oh, it's simple: absolutely lose my f--king mind. 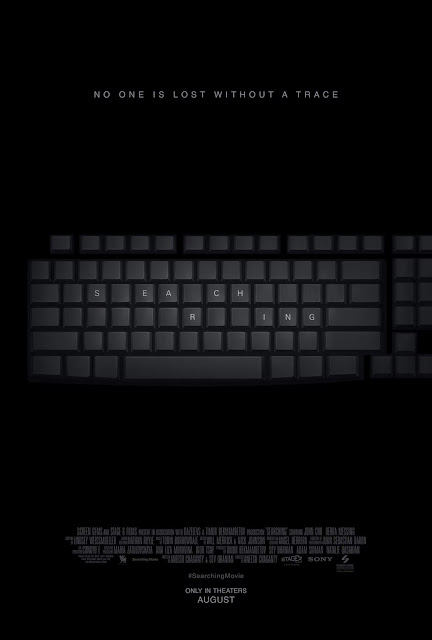 Good thing, unlike me, David Kim's an actual adult, capable of solving problems involving those he loves the most. Starring the impossibly-underrated John Cho as the aforementioned Mr. Kim, Aneesh Chaganty's Searching is a gut-wrenching thriller you definitely need to check out. And as cool as it was to see on the big screen, turns out, it might just be better to catch it on your laptop. Wait, what?

Taking place solely on a lone computer screen, Searching ups the found-footage ante to eleven in the clever presentation of a desperate father's frantic scramble for his missing daughter. While it works better than Unfriended [review] - which I remember liking a bit -  there are still some moments and scenes where you're gonna have to shut your eyes before they role out of your f--king head.

Maybe you kids see nothing wrong with every moment of every day being live-streamed by everyone, but there were a few occasions where things got pretty ridiculous. Maybe I'm just not on YouTube when the local news streams footage of a car being pulled out of a lake, or I've never logged into a live broadcast of a f--king funeral, but these moments seemed beyond absurd. (rambles the guy on his blog)

Having two highly-deviant older brothers, I grew up watching a lot of horror flicks. While they were likely in it for the requisite shower scenes, I was too young to be enthralled by a soapy co-ed. At least initially. Instead of focusing on the double-d's, I was more fixated on the double v's. That is, the villains and the violence. Yeah, those two were doing something in the bed, but did you see how Jason jammed a spear through both of them? Wowzers.

But if there was anything I was even more obsessed with than late 80s/early 90s horror, it was the simple act of acquiring the indecipherable scribbles of someone other people had heard of. Or, as you might put it, collecting autographs. Never to sell, but always to gawk at, I spent too many nights writing letters to moderately famous...athletes, in hopes of getting a much sought after Herbie Hancock.