I'l let you in on a little secret: I hate the Fourth of July. The fireworks are the main culprit (how are adults still impressed by this?) with a dash of the absurdity of celebrating the current United States in there too. Also, and this is a bitter teacher talking, because the day signals the beginning of the end. Of summer. The back-to-school sales will start soon, and the carefree nature of June has officially given way to the impending doom of August.

But all the other holidays? Nothing but love from me. Fine, Valentine's Day I could take or leave, and New Year's Eve ain't ever been my scene, but Halloween? Thanksgiving? I couldn't enjoy them more.

And Christmas? Goodness. I mean, everyone loves Christmas.

Yep, in The Grinch, brought to us by the good (but never truly great) folks at Illumination, even that salty green curmudgeon doesn't seem to outright loathe the holiday like he once did. Nah, this time, as voiced by Benedict Cumberbatch, ol' Grinchy seems more generally irritated with Christmas versus his borderline psychotic let's burn this mutha to the ground stance seen in previous outings.

Email ThisBlogThis!Share to TwitterShare to FacebookShare to Pinterest
File this under Crappy Thanksgiving

But, hey - what are we gonna do, cancel Halloween?

We've all heard that right before you die - your whole life flashes before your eyes. Or, according to movies, the easily-decipherable important bits do. Your wedding. The birth of your children. Your spouse telling you they love you. It's all rather romantic, isn't it? I mean, who'd want to see a montage of all the times you wiped your ass?

Whether it's your little brother stabbing you while you toplessly comb your hair, or a kitchen knife through the back of your throat from a silent stranger dressed like a garbage man, one way or another, that highlight reel is cued up and ready to go.

All you gotta do is die! 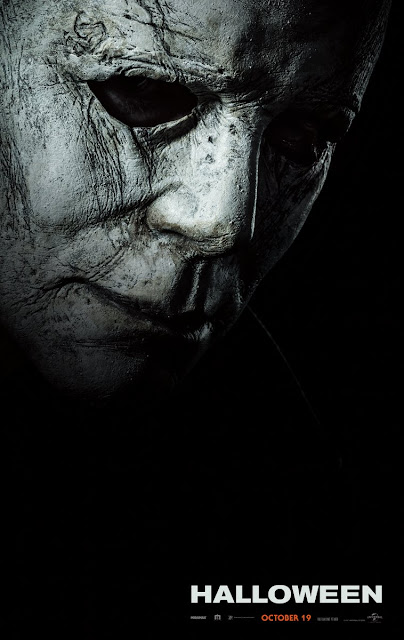 Because I wanted to finally rejoin (film?) society and see the new Halloween movie (on opening night, no less), it would only make sense to revisit the old one beforehand. As in, immediately beforehand. So, within the space of half an hour, my wife and I (both of born in 1979), finished the 1978 original, then dashed across town to the theater to catch the 2018 sequel.

So, just like that, our entire lives had flown by. Four decades, gone. And when we came to, everything had changed. We were alive and very old, and more pressing, Jamie Lee Curtis' hair was no longer feathered.

After slogging our way through the deliberately-paced original, with my wife side-eyeing me the whole time (this is a classic? This?), it's safe to say that we both enjoyed the latest sequel infinitely more. While not much has changed for Laurie Strode, the pace and intensity of horror films, thankfully, has. Yes, this beauty versus the beast setup is a tale as old as time, sure, but now it's more visceral and exciting. Mikey is still as quiet and pissed off as ever. Bus transfers at the prison are still scoring needs improvement on Survey Monkey. And when Love It or List it comes to Haddonfield, Illinois, I don't give a shit how nice that new kitchen looks - you f--king list it, goddamn it.

Email ThisBlogThis!Share to TwitterShare to FacebookShare to Pinterest
File this under Now That's Scary

It's the burning rain of death!

The Halloween of 1993 was probably the last time I went trick-or-treating. I think.

I would have been fourteen (and a high school freshman), so I might be a year off, but for the sake of this post (and the fact that it doesn't matter in the least), let's just go with it.

I wore a San Jose Sharks jersey (um, it was '93 - the Sharks teal road jersey was issued to wannabe a-holes by the federal government) and a glow-in-the-dark Jason Voorhees mask. If it had come in a package, once could assume it would have been titled murderous hockey player and/or timid dickbag desperate for Skittles. Either way, I knew right away, from the slight frowns of the candy-givers, that I had made a huge mistake. Simply put?

I was too old to be participating in this annual tradition. 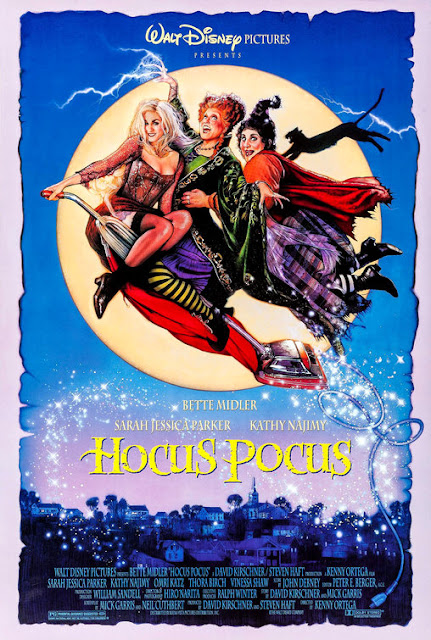 Which brings us to Hocus Pocus, yet another Halloween-related activity that I shouldn't have partaken in. You'd think I'd have learned something in the ensuing quarter century since 1993, but here I am, still ruining a perfectly good holiday with a bad decision.

In my defense, at least this time I wasn't an awkward virgin, knocking my sweaty hands on the doors of my apathetic Hawaiian neighbors. Instead, I was an awkward adult, gathering my children around the television, insisting they watch this 'classic' with me and my wife. I'm emphasizing they're mine, my kids, just so we can be clear that unlike that kid back in 1993, the 2018 model of m.brown has had sex. More than once, in fact.

Blogger Guy, what the f--k? No one needs to know all that. Oh, but they do Italicized Voice of Reason, because in a silly kids' movie about Halloween, whether or not the main character has ever gone for a ride on the wild bologna pony is paramount. Trust me - it matters. So much so, in fact, we should probably talk about his virginity as much as possible. Just so the little ones can really understand that having sex is like, super important, if witches be all up in your shit.

Email ThisBlogThis!Share to TwitterShare to FacebookShare to Pinterest
File this under Witch Please

What is wrong with me?

Honestly, I liked it better the first time.
In June.
When it was called Upgrade.
And I wasn't a miserable prick.

Even though the, uh, modifications weren't as cool, and the voice in his head wasn't as routinely hysterical, I had a better time with Leigh Whannell's flick. The violence was more visceral and the love interest was more, well...lovelier.

Hell, even if the Tom Hardy wasn't actually Tom Hardy, for whatever reason, I still had more fun with Upgrade [review] than I did with its cinematic cousin... 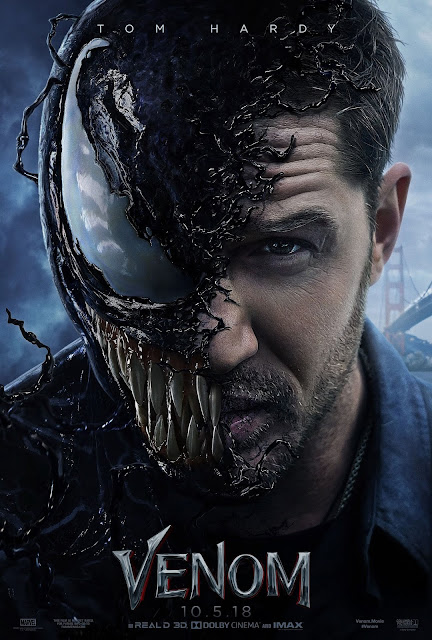 ...Venom. Even if early word (at the time) had suggested it was a hot mess, I still went in hoping Sony's latest Marvel flick would defy odds and kick so much ass.

But as the audience around me seemed to be enjoying themselves more and more (including my sister, an enthusiastic moviegoer, to say the least), I felt myself drifting in the opposite direction. This is what you guys came to see? This? People were damned near falling out of their seats they were laughing so hard, and even more bewildering, it wasn't at the movie, but with it.

All I can think of at this point, is that I'm incapable of joy, because this Venom flick, while being thankfully Topher-free, rubbed me the wrong way. Tom Hardy is great in everything, so despite his performance being the best part of Ruben Fleischer's latest (dude did Zombieland and Gangster Squad), he's also why I was so let down.

See, once Hardy was announced as Eddie Brock, it only seemed logical that this new version of Venom would be a hard-R, impossibly creepy look at the famous villain/anti-hero. I imagined something along the lines of what Heath Ledger (and Nolan) did with the Joker in The Dark Knight, and began to count the days until Venom hit theaters. Hardy is going to literally eat someone.

Email ThisBlogThis!Share to TwitterShare to FacebookShare to Pinterest
File this under Can You Suck This Out of Me?

The original Predator film is in my DNA.

String up my naked corpse from a tree, rip my skull and spine out of my tattered body, and all over the jungle floor will be fragments of John McTiernan's classic. Even if I ain't got time to bleed, you'll see the 1987 Schwarzenegger flick spilling out all over the damn place.

The woosh woosh of the Predator scanning his surroundings. The minigun that cleared out an acre of trees in thirty seconds. The dead scorpion in predator vision. The yousonuvabitch handshake between Arnie and Apollo Creed. Hawkin's simultaneously teaching me about the birds and the bees and how sound reverberates in a vast chamber. I have seen that movie so many f--king times, it's a part of me. Hell, a part of us, as each of my three brothers feel the same way.

But my sister? My twenty-eight year old baby sister? She's never seen it. Like, never ever.

Which likely explains why she absolutely adored Shane Black's latest entry into the Predator franchise. Bouncing and clapping along and just having a merry f--king time was my sister Tatianna, who, after we had just got home from Monster-Mania Con [wrap], straight-up devoured her first taste of the outer-space skull collectors.

For me, however, The Predator was just the latest film featuring those ugly muddafuckas that desperately lacked the sublime magic of the original. Oh, it's not terrible by any stretch. It's just not, you know, Predator.

After its ship crashes on Earth, a Predator gets into a bit of a kerfuffle with soldiers who were on some sort of hostage-rescue mission. An army-ranger type dude named McKenna, kicks its ass a bit, and in the process gets a hold of some sweet alien tech. Worried that the government will frame/kill him, he mails himself the iconic helmet as a potential bargaining chip later on down the road. Unfortunately, his autistic son opens the package and, obviously, wears the badass helmet to go trick-or-treating.

While that's good news for the kid, it's bad news for everyone else, as the helmet/mask thing acts as a beacon which the Predator can follow to get its gear back. Of course it does this, but not before gloriously murdering a room full of dudes in lab coats in the meantime. Though it doesn't kill everyone, as it thankfully decides to spare a naked woman. Yep. Even the most elite sport hunters in the galaxy aren't total dicks.

Email ThisBlogThis!Share to TwitterShare to FacebookShare to Pinterest
File this under Munn's the Word
Newer Posts Older Posts Home
Subscribe to: Posts (Atom)