I'm not sure anyone here can actually believe it.

I tried with The New Mutants in August of 2020, but I chickened out when the theater inevitably became not empty (according to the app). Anya Taylor-Joy always takes my breath away, sure, but in theory I was going to need it back.

I swore I wouldn't bail on Tenet in September, my next attempt, but the thought of bringing something home just to see John David Washington solve future crimes from the past (or whatever) felt irresponsible at best. So again, bought the f--king ticket, and stayed the Hell home.

The only time I was ever going to the movies again? I needed it to be safe.

And I needed to be alone. 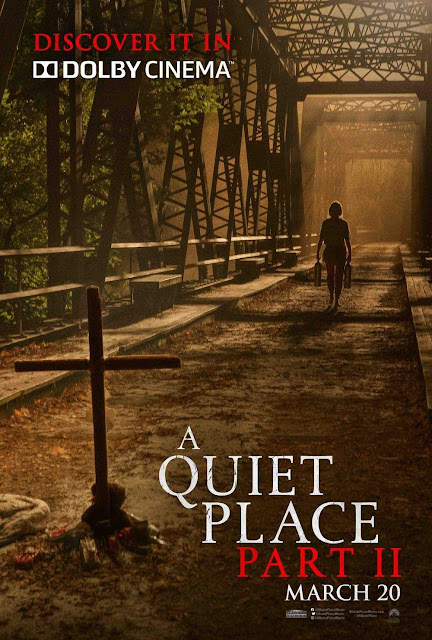 Which are more or less the exact words the Abbott family lives by in A Quiet Place Part II - the first film I managed to see theatrically since COVID-19 showed up on Earth and f--ked everything. Picking up moments after (and before, sort of) the events of the first film, director John Krasinski's follow-up is nothing short of essential viewing. But that just might be the overpriced popcorn talking...(it isn't).

Though I'm not sure why these f--king creatures came to Earth if they hate noise so goddamned much, I'm nine-hundred percent positive that I love these murderous pricks regardless (despite their poor vacation planning). This time around, the film opens with the terrifying moments when everything went immediately tits up, and it might be the most harrowing ten minutes of either film (and that's saying something, as these flicks are a combined four hours of the audience collectively holding their breath and asses). A normal New England day (which at this point in our lives seems like a Rockwellian fantasy) is jettisoned into the sun, as these creatures appear out of the sky and destroy absolutely everything. It's shocking, scary and surprisingly heartbreaking, considering we already know how this story ends.

Email ThisBlogThis!Share to TwitterShare to FacebookShare to Pinterest
File this under My Natural Habitat
Newer Posts Older Posts Home
Subscribe to: Posts (Atom)