Something tells me we're not getting the band back together.

Who was your favorite member of the team, Dad?
Who's on that giant sticker you slapped all over your laptop?
What do you think I should dress up for next Halloween, dearest husband?
Why won't the DCEU just go away forever already?
And...

...why are you looking at me like that? I just want to go to sleep. I have a headache. 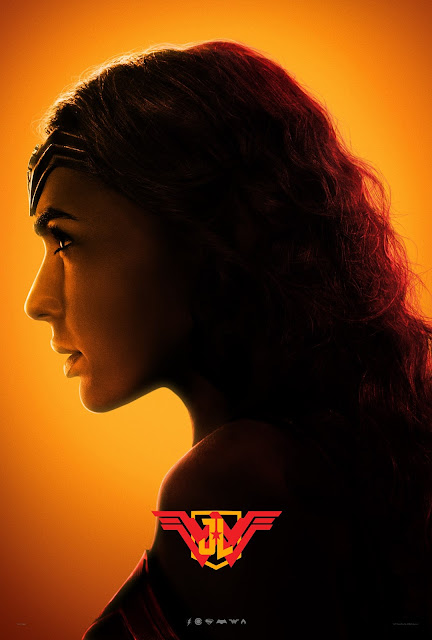 Obviously, Wonder Woman is the answer to each of the  above (mostly non-fictional) questions, and also the reason I have already seen Justice League twice in its first week of release. Oh, I got the memo I'm supposed to hate the shit out of this movie (and essentially the entirety of the DCEU), but I'm simply going to reject that logic. In fact, I'm going to reject all logic. And you should too. This is a (comic book!) movie, for f--k's sake, about people with superpowers (well, most of 'em) fighting something that looks like Benedict Cumberbatch had an insane three-way with an armored goat and a CGI tree. Eat your popcorn, watch things go boom, and chill the f--k out. And if you're still not enjoying yourself? Wonder Woman.

Remember when Batman killed Superman? Me neither. But apparently he did and the world has become an extra shitty place (though, let's be honest, living in fictional Gotham and Metropolis where hope doesn't exist still seems better than say, I don't know, actual America). Good thing Bruce Wayne has a plan, and that plan involves forming a team of superheroes, which he will presumably lead. The catch? Bruce is the weakest member of the team, moving with the grace of a wounded snowman.

Email ThisBlogThis!Share to TwitterShare to FacebookShare to Pinterest
File this under My Kind of Gal

This was never a beach-side puzzle.

In Utah, assuming you've perpetrated a horrendous crime, you can choose, yes, you can opt into, the right to be executed by a firing squad. Like, right now. Twenty-seventeen. But only because they're currently all out of lethal injection drugs.

Apparently, there are five volunteer shooters (all trained) that carry out the execution, but only one of their guns is loaded with an actual bullet. The other four are firing blanks. Perhaps obviously, no one knows who has what gun, so the person who ultimately kills the murderous bastard remains a mystery.

A bunch of seemingly random people getting together in the snow-capped mountains, with the collective intent to kill a killer.

I've never read (or seen) the works of Agatha Christie before, so please forgive me for enjoying Kenneth Branagh's updated take on Murder on the Orient Express. Apparently, this movie sucks hard, and is significantly worse than the film version that came before, but I was more or less captivated for the hour-and-fifty-four-minute runtime. And being that I'm obviously a moron, I didn't see anything coming. And quite frankly, I'm not sure how you could.

Hercule Poirot is the world's greatest detective, and though the competition is stiff, he also just might be my favorite dick on the planet. See, Poirot's gift is totally his curse, as his insane attention to detail consistently robs his life of joy. When we meet Poirot, he's just publicly solved a case at the Wailing Wall, and is looking for little rest and relaxation (and, if I'm being frank, time for a little Dickens). Unfortunately, fate ain't exactly interested in all that, and throws Poirot an Oliver of a twist, routing him back to London to solve an urgent case instead. Lucky for him, there just so happens to be one seat left on the most regal of locomotives, the exquisite and opulent Orient Express. Should be a relaxing ride to London, right? Well, it could have been, had Edward Scissorhands not been stabbed to death along the way.

Email ThisBlogThis!Share to TwitterShare to FacebookShare to Pinterest
File this under Right in the (Gilderoy Lock) Heart

If you have to go, go. But it would be really great if you stayed.

I don't remember what the priest said exactly (he went way rogue during, the ceremony), but I'm sure the whole in sickness and in health thing came up. I mean, it's part of the rules, right? You pledge your life to someone, you can't f--king bail on them when they get sick, right?

But what if you're not married yet? Hell, it took me seven years to propose. I was already being enough of an asshole. If she had gotten sick, I wasn't going anywhere.

Okay, dickhead. Try not to pull anything patting yourself on the back, okay? What about if you're not even dating? What if you've already broken up? 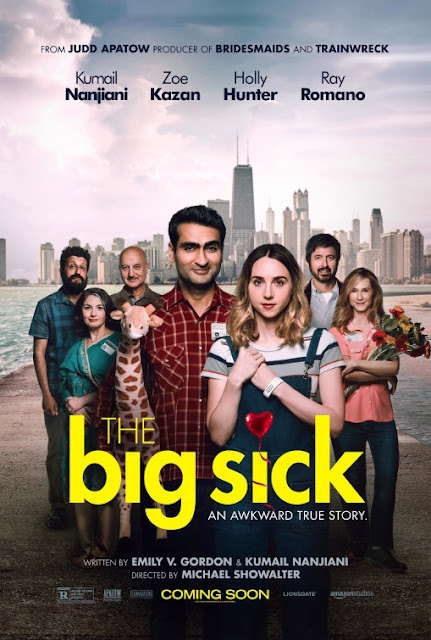 Being that I'm a moderately-functioning consumer of moving pictures, it goes without saying that of course I had heard about The Big Sick prior to watching it with my wife the other night. Of course I knew it was based on Kumail Nanjiani's real-life relationship with Emily Gordon, and how their relationship persevered through her life-threatening illness.  And of course I was going to love the shit out of it, because, well, it's not like I'm a f--king heartless prick, incapable of joy and basic human empathy.

Uh, so Kumail, at least, is a good dude, amusingly struggling through life a burgeoning stand-up comedian
(and Uber driver). After a show, as I'm sure is so often the case, this funny dude meets a seemingly lovely young woman and they hit it off. Turns out this chick is, you guessed it, Emily, and after a quick check on the guy your mom married, she heads the Hell home. Clearly Kumail wants a little more than a one night stand (wait, what?), and the inevitable game of cat-and-mouse begins. The catch? Kumail's family are some pretty traditional Pakistanis, and are desperately trying to arrange his marriage. To a fine Pakistani woman. Ain't nobody got time for some white chick and all her bullshit. If he's going to pursue Emily, he's gonna have it covertly.

Watch out for his fingers...they make sparkles.

My son has been having a rough go of it lately. Awful nightmares, sleepless nights...rough mornings.

My wife questioned him at dinner the other night, and he immediately broke into tears. Red face, head in his hands, quiet sobbing - the whole bit. Of course, she looks right at me, equally saying/staring to me, What did you take him to? What was the last movie you two saw? (Could that be it?)

Instantly, I put my hands in the air. No, hun. I promise. There's no way that movie could have given him a nightmares. No. Way.

I mean, that movie? The last movie we saw together?

It was a dream.


Thor: Ragnorok was everything I/we hoped it would be...and more. Maybe a little too much more, in fact. Me and the boy had been waiting patiently to see it on the big screen since that rad trailer debuted months back, and it's safe to say, it didn't disappoint either of us.

Miraculously caught on opening night (we had to be ready to give up our seats if someone, er, (st)rolled in), the third Thor flick opens with the God of Thunder in the worst hammock ever, captured by some giant lava-monster thing, likely planning on world domination. There's some witty banter, a few extremely solid jokes (the spinning!), a few moments before Thor frees himself and kicks all kinds of ass. It's funny, cool as Hela to look at, and is a perfect five minute snapshot of what will happen in the next two plus hours.

Honestly (/annoyingly, I know), if I have any gripe with Taika Waititi's kickass entry into the MCU, it's the fact that here, in the third Thor flick, this sumbitch is over two hours long. I enjoyed my time in and around Sakaar (can something be sexily downtrodden?), but I think I would have been cool if Mr. Waititi hadn't added those thirty-plus minutes after Comi-Con. Unless, those minutes belonged to Korg, of course. Cause that motherf--ker's like, mandatory.

Email ThisBlogThis!Share to TwitterShare to FacebookShare to Pinterest
File this under God of Lightning and the Thunder (Th-Th-thunder)

Everyone was warned...but no one listened.

There are many great mysteries in life. Why are we here? What is our purpose? Who is responsible for all of this?

Sometimes, these questions overwhelm me - freak me out a bit. So I go to the movies to escape the infinite emptiness of life (and have some popcorn, let's be honest). But when I sit down...the questions? ...They return.

Why am I here? What's the point of all this? And most pressing...

...WHO THE F--K IS RESPONSIBLE FOR ALL THIS? 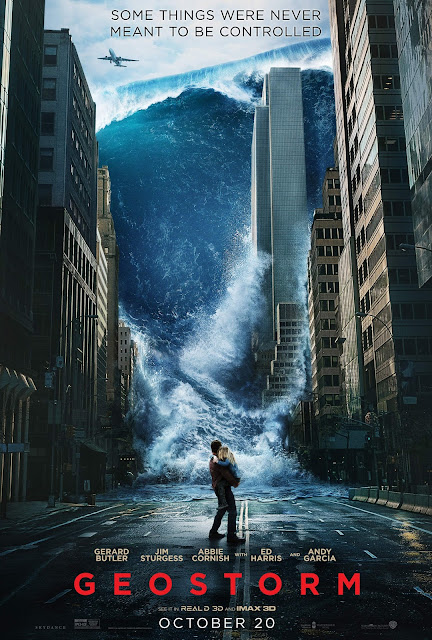 In the case of my latest trip to the cinema, it's quite clear the butler did it. Yes friends, our old pal Leonidas, Mr. Gerard Butler himself, has again given  us the ol' One Two straight in the greasy dick of good taste, by starring in the 120 million dollar shit-fest, Geostorm. I've always assumed I'd be bummed out by the end of the world, but if nuclear death means I'm unable to see the next great/totally shitty disaster film, sign me up. Somebody grab Little Rocketman by the p-ssy, asap.

Actually, for about three, maybe four seconds, Geostorm was kinda cool. See, in the near future, the world's climate has gone to Hell and major storms have killed countless f--kers. A team of scientists, whatever those are, creates a massive system of satellites capable of neutralizing any weather-related threat. Say a major hurricane is forming directly over your house. Well, whatever the perfect conditions are for that f--ker, these satellites, known for some reason as Dutchboy (the finger in the dyke kid, if I recall correctly), beam down the opposite requirement, immediately negating the shit-storm that was about to ensue. And since this system was a joint effort of many nations, it seems the world has found itself...relatively peaceful. The only real titty-twister apparently, is who gets control of Dutchboy next. The USA was steering the ship...but in just a short time, it's time to pass the Dutchie on the left hand side, know what I'm saying?

Email ThisBlogThis!Share to TwitterShare to FacebookShare to Pinterest
File this under A (Un)Natural Disaster
Newer Posts Older Posts Home
Subscribe to: Posts (Atom)