I'll always love you Diana, no matter where I am.

In an effort to be courteous, let's go ahead and mark this year down as less than favorable.

However, in the infinite darkness/shit sandwich that was 2020, there were certainly some slivers of light/morsels of ham. In exchange for going to the movies, family gatherings, shaking hands, traveling, events, successfully educating children (that's a stretch, sure), we got...infinite time at home with our families. And honestly, in the decades preceding the pandemic, that would have been something I would have fervently wished for. But, as the saying goes...

Be careful what you wish for, you dumb son of a bitch.

Oh, Wonder Woman 1984, how I wished I loved you so. When early word dropped of your enormous girth, er, runtime, I couldn't have been happier. One hundred and fifty-one consecutive minutes with Gal Gadot, you say? Yes, please. And when it was announced that for some horrible reason the two-hundred million dollar film would premier in my effing living room, our local coroner was going to have to bubble in exploding boner as my cause of death. This was all too good be to true, right?

Okay, as far as I can tell, this is what WW84 is about: Diana has been chilling in the 80s, kicking ass in the food court, during breaks from writing hearts around the name Steve in her dream journal. But in a routine (and impressively poorly-planned) local jewelry store heist, some small-time rascals have unearthed some sort of dream stone. Uh huh, a magical rock. That was in a mall. Fine, whatever, not great mind you, but Diana's simultaneously kicking ass and gliding around Waldenbooks like an even sexier Wayne Gretzky. The news still good, the soundtrack still great.

Email ThisBlogThis!Share to TwitterShare to FacebookShare to Pinterest
File this under Should have been WW94

If you believe, it's all possible.

I hate lying to my kids.

My daughter is seven years old, and her belief in Santa Claus has been steadily waning. This year, she's been rather boisterous in calling faaaaake whenever anybody mentions jolly ol' St. Nick. There is no part of me that is willing to say, now, you wait just a minute, young lady...

Typically, you could blame the older sibling, but I'm not even sure Matthew is the reason she ain't having it. Maybe in a year where friends, family, sports and school are taken away from you, maybe you grow up real/too quick?

So, in an effort to renew her faith, without being dishonest, I did what any responsible parent would do.

I put on a holiday move. And in an effort to write something for this blog...one I hadn't seen. 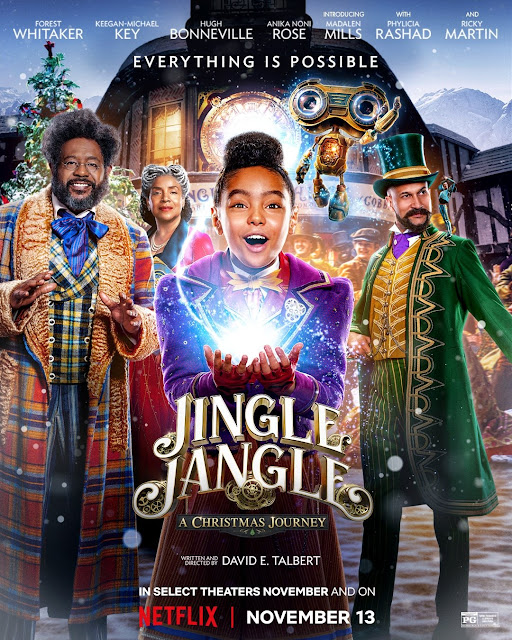 And shocking no one, I watched it with just her, as my wife and son bailed almost immediately on Netflix's color-soaked 2020 musical, Jingle Jangle: A Christmas Journey. Recommended to me earlier that day by a co-worker (sorry, Margaret), I thought what better way to get in the spirit, right? And you know what?

Jangle is a good dude, proud father, and frankly, bad-ass inventor, and when we meet him, the final component for his greatest creation yet arrives in the mail. In a flash we see what is destined to be the toy of the century, some insanely articulated and wildly articulate Matador-type mechanical doll named Diego (voiced by Ricky Martin, clearly livin' la vida loca). Diego is special, so special in fact, he balks at the idea of being mass-produced and convinces Jangle's somewhat lowly assistant Gustafson to bounce up out of there real fast. And to, uh, grab Jangle's idea book on the way out the door. Major naughty-list behavior right there.

Email ThisBlogThis!Share to TwitterShare to FacebookShare to Pinterest
File this under Merry Christmas Eve...Eve

I've just told you to f--k off twice, yet you're still here.

At some point in your life, you've said something you regret. It could have been stupid, offensive, hurtful, misguided, uninformed or even my personal specialty, all of the above.

Sometimes you can get lucky and know you f--ked up right away, but in other situations it takes time for the combination of words your big, dumb brain and your big, dumb mouth shat out to get you in trouble.

...or even the better part of a decade. 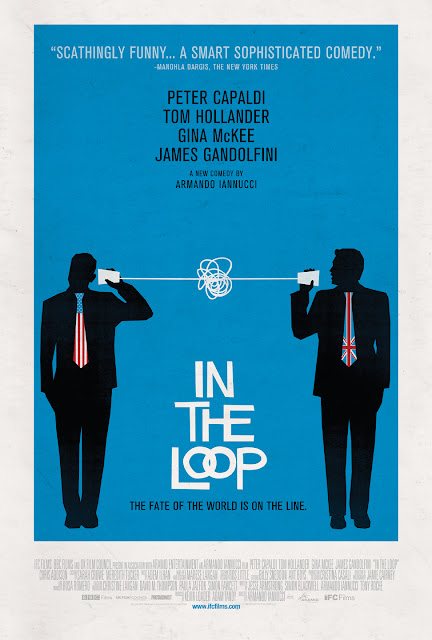 I wish I could tell you the exact day and time that blogging legend (/wielder of sharpened knives) Margaret from cinematic corner. recommended that yours truly check out the 2009 ass-kicker, In the Loop, and I wish I could tell you what I said in response, but after pouring through over five-plus years of comments...I've got nothing. I bet I said something flippantly like, of course I'll check that out, and also of course, I absolutely did not.
UNTIL NOW.
(turns out I'm not the only mostly-agreeable asshole saying things that would have major unintended consequences)
After rather casually saying that conflict in the Middle East was unforeseeable during an interview, Simon Foster (Tom Hollander, absolutely killing it) draws the Sauron-like stare and ire from Malcolm Tucker (Peter Capaldi, my absolute f--king hero), the Director of Communications for the Prime Minister. Tucker tells Foster to toe the line, which is government code for talk, but don't say a goddamned thing, you f--king twat. Oh, and that's not a direct quote. I cleaned it up a bit.
Read more »
Posted by m.brown at 11:10 PM 7 comments:

Email ThisBlogThis!Share to TwitterShare to FacebookShare to Pinterest
File this under (is dedicated to Margaret)

I'm gonna need to give this a think, I think.

Once - pretty sure it was one time - I snooped around before Christmas. Fine, maybe twice. Three times. Whatever.

Anyway, my mom had an errand of some sort, and as soon as I saw her white Jetta carefully back down our narrow driveway, I instantly became (a much less handsome) Ethan Hunt. With the Mission: Impossible music in my head (though at low volume, in case she forgot something) I swooped into my parents room to gather intel. No boxes moved, no wires tripped. The Sega Genesis I had dreamed of was buried in the back...and in a few short days, it would be mine. Oh, yes.

I'm not proud of this, mind you, as it was probably one of the sneakiest things I ever did at Christmas time. But sometimes, during the holidays, you never know what you might find in the closet, right?

Or, on the rare occasion, who. 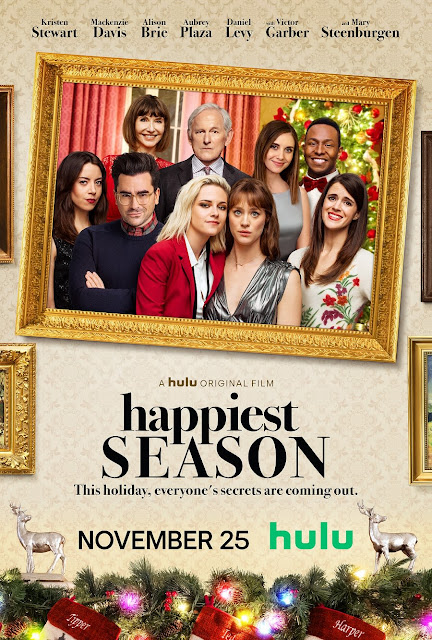 Wait a sec. That introduction sounds like I might be implying that I'm gay, which with how much I love Dan Levy...is a distinct possibility. Eh, actually, it's not me flip-flopping in regards to my sexuality that we're concerned about, but instead Mackenzie Davis' character Harper, the protagonist in Hulu's latest holiday offering, Happiest Season.
While watching the massive Davis routinely bite her lip over whether or not she really, really loves KStew wouldn't ordinarily be something I'd sign up for on opening night, you throw in any amount of Dan Levy (and Alison Brie and Aubrey Plaza) and not only will I be there, but for some reason, with motherf--king bells on. (I looked up the origin of this statement and it still doesn't really make sense)
Coming home for the holidays is frightening enough, but combine that with coming out for the holidays, and just like that, you've got yourself the edgiest Hallmark movie ever. At least that's what Happiest Season feels like...initially, you know, like those schmaltzy silly flicks where Candace Cameron gets amnesia hanging stockings or whatever.
Read more »
Posted by m.brown at 6:25 PM 2 comments:

Email ThisBlogThis!Share to TwitterShare to FacebookShare to Pinterest
File this under the yuletide ain't the only thing that might be gay
Newer Posts Older Posts Home
Subscribe to: Posts (Atom)