You will never be good enough.

EXT. IMPOSSIBLY WELL-LIT BEDROOM- NIGHT
After dinner at his parents house, GUY and GIRL lay in bed together, but facing in opposite directions.
GUY
Hey, what's wrong? Look at me.

She turns, and it's clear she's been quietly crying.
GUY
Are you still thinking about what my mom said? She was drunk.

GUY
It doesn't matter what anyone else thinks, okay? I love you.

They kiss, and despite GIRL never removing her bra for some odd reason, they have passionate, fulfilling sex on a bed larger than the square footage of a normal person's entire living room. And after, no one  has to awkwardly flee the scene and go to the bathroom. They simply lay there. Forever.

Oh, Movies. You're so silly. All these years, you've been telling us that all you need is love, but let's cut the shit, right? Love's pretty rad, sure, but it ain't shit without peace. And the only way to ever get it? Well, you're going to need something stronger than love and peace combined.

You're gonna need Mom. (and a way better screenplay) 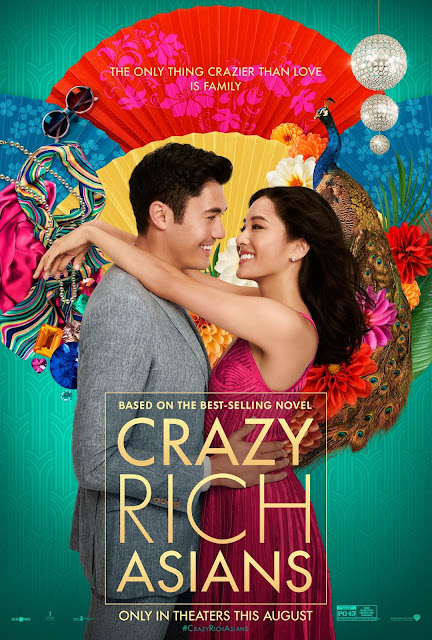 There have probably been ten thousand movies that tell the same story that Crazy Rich Asians does (controlling mother initially tortures son's unsuspecting girlfriend for no good reason whatsoever, but ultimately it's because, despite having everything, she's a miserably empty person void of joy and human feelings but who'll naturally come around in the end) but that doesn't make the story any less enjoyable. In fact, for a film that was released just last year, Jon M. Chu's smash hit feels like something that could have been churned out by Old Hollywood, except thankfully no one's in f--king yellowface.

In case you've never seen a romantic motion picture, here's Crazy Rich Asians, as boiled down by a moron: Rachel and Nick are young and in love in the only place where such a combination is allowed, wondrous New York City. Nick's about to be the best man in a wedding back home, and invites his gloriously beautiful/borderline perfect girlfriend to accompany him to Singapore. Turns out, as handsome as Nick is, he's also rich as f--k. And somehow, not only did Rachel not know this, but his sizable fortune is major f--king problem for just about everyone involved. Aw, that sucks. Good thing my wife married a penniless troll.
Read more »
Posted by m.brown at 10:24 PM 8 comments:

Email ThisBlogThis!Share to TwitterShare to FacebookShare to Pinterest
File this under Singapore Rachel

I think about her constantly. I laugh at all her jokes, even if they don't make any sense. I'll drop just about anything I'm doing if she calls. And she calls all the time. Between you and me, on most nights? I even help brush her teeth for her.

And on the off-chance that she ever mentions that she wants to see a particular movie, well, I can't get us there fast enough. Oh, don't worry, it's not like I'd ever let her take the wheel. I mean... 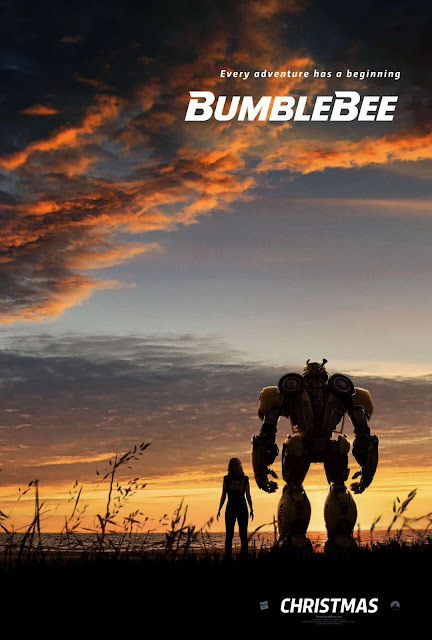 As soon as she saw the trailer again (the first time it startled her), my adorable daughter Violet let it be known, rather loudly, that she reallyyyyy wanted to see the Bumblebee movie. Being that I'll oblige just about anyone who's requesting a trip to the cinema in my presence, it was an absolute no-brainer that I take my little girl to the theater...even if it's to see the sixth frickin' Trasformers movie.

But, uh, whatever your name is, I've heard this is the best Transformers movie yet...! It just might be Voice of Reason, but if you line 'em all up, one of the times I, uh, crapped myself has to be the best time, feel me?

Set in 1987 to the max, Bumbleebee is actually a fairly reasonable origin story. See, long before the events of the first film where Sam Witwicky and his Target brand Strokes t-shirt fought Megatron for the Allspark, a yellow Autobot known as Blink 182, er, B-127, was jettisoned from Cybertron. Turns out the Decepticons were on the verge of wiping out all the Autobots, every last one of them, and team captain/Peterbilt truck/potential future President of the Unites States (nothing would surprise me at this point) Optimus Prime sends B-127 to Earth, in hopes of one day getting the band back together. Unfortunately, the military ain't all that excited to see a giant walking space car, and they attempt to blow him halfway to Hell. Bullets fly, trees explode, John Cena seems mildly irritated, and B-127 fades into obscurity. Or he would have, if it weren't for those damn meddling kids.

Email ThisBlogThis!Share to TwitterShare to FacebookShare to Pinterest
File this under More Than Meets Some Guy

I'm so embarassed. I'm not a real person yet.

I will die knowing, Hell, screaming to anyone within earshot that middle school is hands-down the worst stretch of a given person's life. Basically, it's that time when you think you know everything, but you're in fact, a ignorant f--king moron.

But coming in second to eleven, twelve and thirteen, might just be that time directly after college. That segment of life where you realize (or don't realize), that quite clearly, what you used to think was the real world was anything but. You've finished high school, conquered college. You have officially arrived. 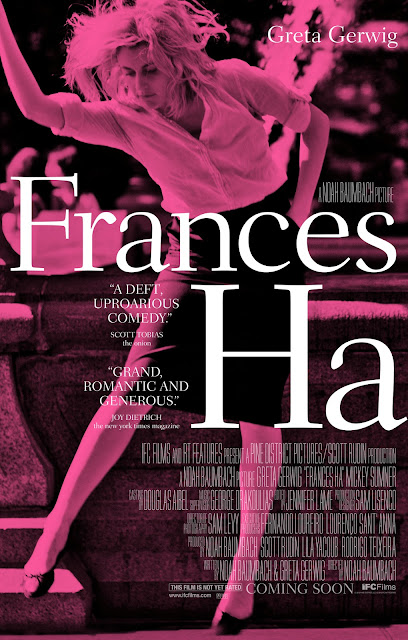 If something perfectly encapsulates the zeitgeist of a time and place that you f--king loathe...can it be considered a success, a fun time had by all? Because that was my dilemma during each and every black-and-white frame of Frances Ha. Yeah, this is well-made, looks lovely and features Kylo Ren likely on holiday from Jedi Summer Camp...but, uh, f--k this shit, you know? All of it.

I barely made it out of my early twenties as it was, and now I gotta watch a bunch of rich assholes play grabass in Central Park? F--k you, and the unicycle you rode in on.

The story, if you can call it that, is shockingly simple. Frances (Greta Gerwig) is a bit of an odd bird, and after her heterosexual life partner Silent Bob Sophie more or less dumps her to move on with her own life, France's basically falls apart. No, no...not to the point where she's sucking off homeless dudes for busfare or anything, but the poor girl is beyond lost without her BFF. So what's a confused, apartment-less, twenty-something in NYC to do? Not much, apparently.

The rest of the film follows Frances from house-to-house, address to address as she searches for the rest of her life. For some of you, it may be as relaxing and relatable as running through the park on a warm summer day in the city, but for me, I was clamoring for a lawn I could tell those damn kids to get off of. Outside of Gerwig's relentless positivity, there wasn't much at all I enjoyed in this 95-minute epic.

Email ThisBlogThis!Share to TwitterShare to FacebookShare to Pinterest
File this under Lighten Up Frances

How did you guys get so lucky?

When it comes to avoiding your impending, violent death, cinematically speaking of course, there are many rules to follow.

And every time I watch a movie where it's going to kill you (Don't grow up in Derry, by the way) there's only one rule I'm hoping the film will abide by: Don't suck. 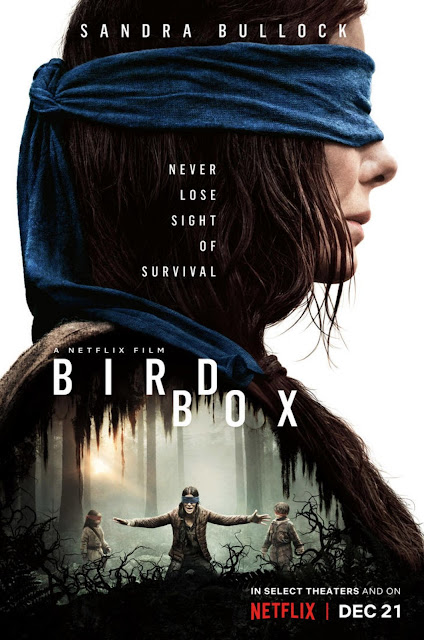 Bird Box, surprisingly, doesn't suck - but it sure as shit doesn't warrant its momentary cultural phenomenon status. Debuting on Netflix in December, this Sandra Bullock-led thriller has, like the mysterious plague at its core, somehow captivated a portion of the entire planet. Apparently, no one has seen any of the films mentioned above, because all of those did the relentless death thing first, sure, and damn near all of them did it better.

In case the rock you live under doesn't have WiFi, here's what you need to know: some mysterious plague is quickly encompassing the planet, were victims, upon catching it (or being caught by it), kill themselves instantly. Think The Happening, but no one gives a shit about the honey bees.

The hook, outside of the glorious chaos that comes from mass (hysterical?) suicides, is that in the world of Bird Box, one acquires this illness through their eyes. You can make all the noise you want (kind of), inhale and exhale like a champ, and Hell, f--k anything that moves, but you best do all that shit with your eyes closed. Because...if you see it, if you dead. Fine, that doesn't make a lot of sense, but like this flick, just shut the f--k up and go with it.

Email ThisBlogThis!Share to TwitterShare to FacebookShare to Pinterest
File this under It's My Bird In a Box
Newer Posts Older Posts Home
Subscribe to: Posts (Atom)