If the train don't kill me...the people will.

There is nothing sexy about my weekday mornings.

No kiss goodbye from the wife as she straightens my tie, no last sip of coffee as I tussle the hair of my lil' slugger. Nope. Instead, I stumble out of my house with the grace and gait of someone just recently rescued from sea, drive the thirty-one post-apocalyptic miles to a job that makes me wish I was dead. Or undead, depending on the radiation levels and bust size of my fellow zombies.

But between you and me? Those two mindless, traffic-filled hours aren't all bad. It's basically the only part of my day where no one needs anything from me, and I can just sit there, not giving a damn, shit or f--k. I just coast along, chasing whatever money they'll give me. 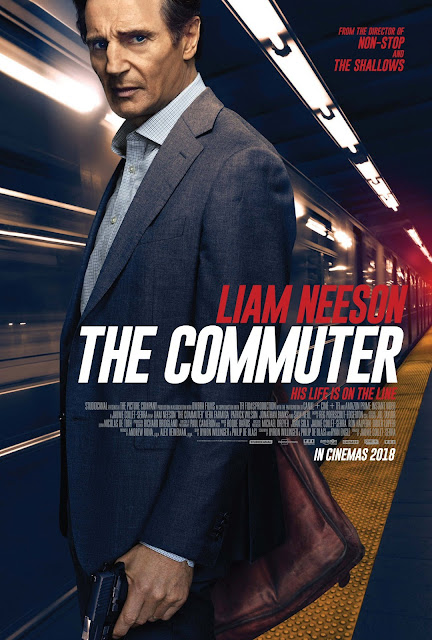 The Commuter, Liam Neeson's latest January journey, doesn't exactly coast along, but good luck giving a damn, shit or f--k about it. I'm glad that a ton of people got paid in the production of this movie, yay them!, but this flick felt like the ultimate rip-off. And at this point, we're so far down the Don't f--k with Liam Neeson rabbit hole, I'm not even sure what film this one cribs from the most. Oh, I know. The one where they f--k with the wrong guy's family, and he's reluctantly forced to do something about it.

Seemingly moments after establishing that college is gonna be (perhaps too) expensive for oh Danny boy, Neeson's Michael MacCauley shows up at work and promptly gets shit-canned. I'ts been real, Mike, but ya gotsta go.

And breaking all stereotypes, the massive Irishman heads to a bar to hang out with a bunch of cops, who apparently, he used to work with. Wait, what? An ex-cop who just lost his job and desperately needs cash? What could possibly happen next?

Oh, right. A beautiful women will approach him on the train-ride home, provide him with the most cryptic way possible to make a little extra money, and chaos and conspiracy will ensue. The gig? All he has to do is find the premise that does not belong. Er, person. Find the person that doesn't belong. And identify them. So they can be murdered. Um, I think.

Feel free to shoot me in the head. Or the nuts.

Email ThisBlogThis!Share to TwitterShare to FacebookShare to Pinterest
File this under Wrong Way On a One-Way Track

He looks for the good in all of us, and somehow, he finds it.

These are very divisive times. There is so little in this world that can easily be agreed upon, even a simple decision can seem insurmountable. Where facts used to be something you couldn't argue with, something that could guide you, now everything is up for debate.

Perhaps making this situation even more troubling, is the fact that everybody has something to say. And with the proliferation of countless electronic platforms, it's easier than ever for them to say it.

But, who should you really listen to? Your friends? Your family? Some blogger you've never met? How about that guy at work who starts every sentence with, you know what you should do...?

No. They're all morons. If you really want to know how to live your life right...

...listen to the talking bear.

That dude knows everything. 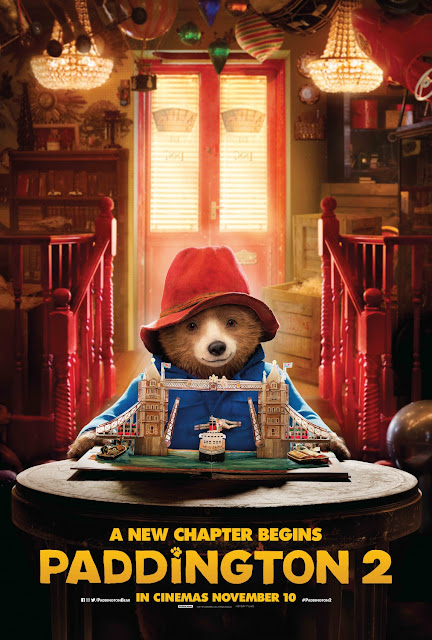 I read somewhere that Paddington 2 was 'the sequel that no one asked for' and I'd quite honestly like to track down whoever wrote such nonsense and...and...give them a hard stare. Just three years after the original's 2014 release, this latest sequel is nothing short of fantastic, and should be prescribed by medical professionals to cure, well, just about everything that's wrong. In the world.

Paddington has settled into his life in London, and become a beloved member of the community. He's an incredibly positive little bear, and seemingly makes the lives of everyone around him that much better. Well, except for Mr. Curry. He's not really a fan.

Anyway, Paddington comes across what is possibly the most beautiful pop-up book in the world, and wants to buy it for his dear Aunt Lucy. She had always dreamed of visiting London, but the arrival of Paddington as a cub changed her plans forever. This book, featuring all the sights of The Old Smoke, would make for the perfect present. All Paddington has to do is earn a little money and the book is his. I mean, it's not like anyone else wants it. Nope.

Not even that wonderful/creepy guy from the steam fair. The one that used that used to be a real actor but now is in all those dog-food commercials.

Email ThisBlogThis!Share to TwitterShare to FacebookShare to Pinterest
File this under What's Left is the Bear's Right

We might die together. And I don't even know you.

When it comes to traveling with Kate Winslet, uh, cinematically, I've got a little good news and a little bad news for you. The good news? At some point during the journey, it's gonna be business time. It doesn't even matter if one of you is betrothed, either. You will be overcome with emotions, and will have sweaty, potentially life-altering sex in some place you shouldn't be.

But the bad news? Hopefully you didn't pack anything of value. Because not only will your luggage fail to arrive in a timely manner, but there's a good chance the vessel carrying you won't either. To be fair, shit tends to slow down when it's ripping apart spectacularly.

Oh, one more thing. All that romance, that was hot. My pants are still on fire just thinking about it. Too bad though, as your chivalrous ass is going to f--king freeze to death in the middle of nowhere.


Okay, so maybe there are many other cinematic instances where accompanying Ms. Winslet is a sex and disaster free endeavor. I'm open to that possibility. But being that The Mountain Between Us is only the sixth or seventh film I've ever seen with Rose Dewitt Bukater in the lead, I'm going to just assume they all end the same way. Maybe a sexy car crash on that Revolutionary Road, perhaps?

Winslet plays Alex, a spunky (perhaps a wee bit bitchy) photographer attempting to head to her wedding in the Mile High City, only to be crushed when she finds out her flight has just been cancelled. Overhearing this dreadful news is the dreamiest of McDreamies, Ben Bass (Idris Elba, classing up yet another stinker), also desperate to get the Hell out of wherever they are. Bass has a surgery tomorrow in Baltimore, where he'll be operating on my incessantly raging boner for all things Elba. Or a sick kid. One of those.

Cut to the unlikely pair hiring The Dude's brother to fly them out ahead of the storm. Ooh, about that. One terrifying as f--k plane crash later, and Alex and Ben are fighting not only the elements, but also a mountain lion and each other's survival instincts. Oh, and the inevitable desire to bunk the Hell up (you know, to stay warm) when given the chance. That mountain between them...might just be made exclusively out of reproductive organs.

Email ThisBlogThis!Share to TwitterShare to FacebookShare to Pinterest
File this under White Snow and Blue Balls

Now I just pretend to be a good dude.

It doesn't seem all that long ago, where the mere thought of a big-time actor starring in a 'made-for-TV' movie was the check engine light on a career careening off the road. A big screen star is going to be in something I don't have to pay for? I don't know if I should feel excited...or depressed.

But I'm (mostly) grown-up now, and a damn I could give about reputation. So by all means, Once Big-Time Actor, make that money. Make it any way you can.

Even if you have to star in something really weird, that a lot of people seem to really f--king hate. 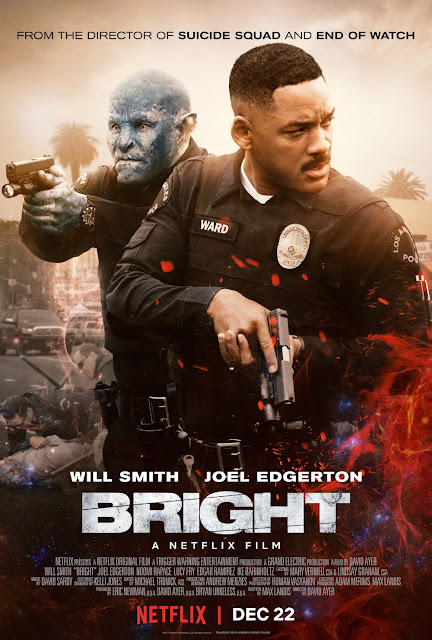 Making a movie that only appears on Netflix is a far cry from The Hallmark Channel presents..., but it's still slightly jarring to see a big (moderate?) budget flick starring Will Smith exclusively debut within the (damn near ubiquitous) streaming service. But even stranger than the fact that Smith headlines David Ayers' latest, might just be what the film is about. And even stranger than that? How much I enjoyed it.

While Bright might be full of all sorts of stranger things, it's played remarkably straightforward. Set in Ayers' favorite American wasteland, Los Angeles, this gritty world of bad good guys and good bad guys is essentially every cop flick you've ever...but with orcs, elves and fairies. Think a tamer version of Training Day set in the public housing section of The Shire, and you're on the right path.To Mordor.

But one where we grab In-and-Out Burger on the way.

Smith plays the pissed off cop Ward, just trying to survive another day in L.A.. If he's lucky, he'll make it home to his lovely wife Sherri, a nurse living in constant fear that next body they roll in to her will belong to her Shrek-loving husband. And if he's not, there's a host of weird-looking motherf--kers that could end up killing him. Including the dude not only with a shotgun, but the dude riding shotgun.