Single advantage of being me? I'm hard to surprise.

In my illustrious career as a server (despite being referred to as waitress on more than one occasion) I made a killing on drinks. Alcoholic drinks at night, oh yeah, but during the day - it was all about the smoothie. That f--ker was $4.50 and some little shits would have/demand more than one in a sitting. Combine that with a burger and fries and you were looking at dropping twenty bucks easily. And no one ever ate alone.

As for those delicious smoothies, we served the standard flavors: banana, strawberry, pineapple, coconut, peach and mango. And if you pressed me (or were super hot), I'd let you know about the hush-hush flavors of peanut butter, oreo or chocolate. The bartenders hated making those as they basically shat all over the blender.

Anyway, as was often the case, someone would get what they thought was a unique and potentially brilliant idea: what if we go ahead and combine all the flavors? I mean, sure one or two is probably enough, but being that I clearly hate myself, and you, naturally, I'm going to throw caution to the wind and cram as much good things together, ultimately making something horrible and unsatisfying. 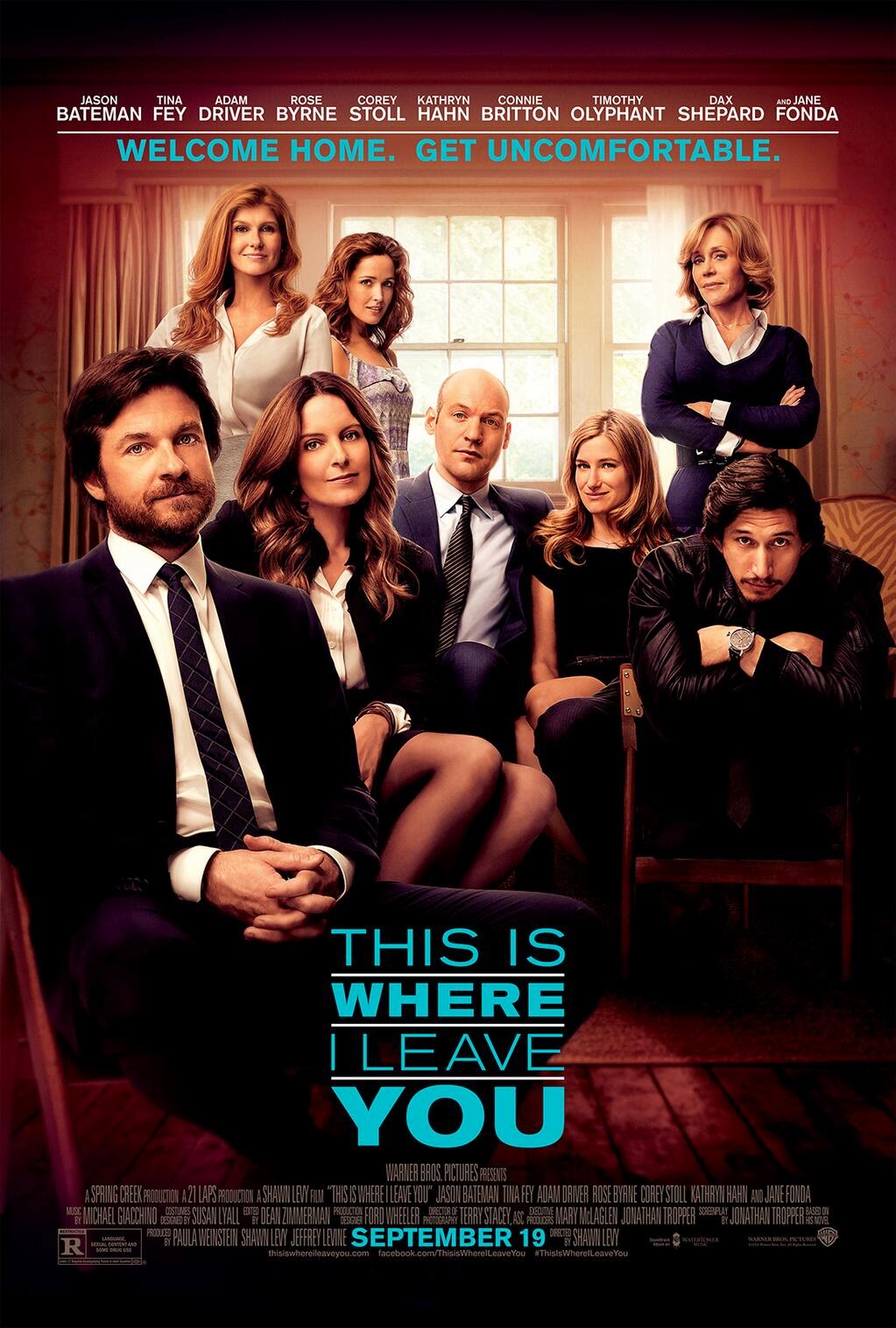 Between you and me, I hated just about every single minute of last fall's This is Where I Leave You. Rented by Mrs. Two Dollar Cinema this past weekend, this movie lands just north of those awful holiday movies that feature 900 celebrities all getting stuck in an elevator. But instead of cashing in on New Year's Eve or Valentine's Day, here the reason for the half-baked hilarity is the, get this, death of their father! Let the party begin!

I wasn't overly familiar with sitting shiva, but according to this movie, it's where a bunch of people who don't look at all related look irritated for a couple of minutes before they go do something hilarious! And while there might have been a decent family dramedy (is that something only assholes say?) tucked under that yarmulke, instead we are left with capable actors acting like idiots. It's like one of those new-school Adam Sandler movies for adults.

Look, I wasn't expecting brilliance, but I was, at the very least, looking for honesty. Unfortunately, anything even remotely bordering something an adult would do was nixed in favor of a moment that would play well in the preview.

Email ThisBlogThis!Share to TwitterShare to FacebookShare to Pinterest
File this under The Maine Problem

I have learned so much from the bears.

I've spent just over a decade as a teacher, and though there are many awful things about the job, the worst has to be how often I'm lied to. On average, I'm probably lied to fifty times a day. Somehow more insulting, most of them aren't even good lies, either. Someone tells me they didn't get the homework with about as much conviction as the person at the drive-thru says May I take your order? Eventually this nonsense beats you down, and you stop believing most of what you hear.

But when one of my students (a good dude, too) recommended that I take my son to the movies later that day (because the movie is sooooo good), I suppressed ten years of misplaced guile and said simply:

Paddington is an excellent children's movie. In fact, I might even suggest those of you currently living the dream (i.e. having no kids) should check it out as well. My student was absolutely correct: it's really, really good.

For me, the preview did the film no justice, as it looked like another steaming pile of talking animal poop, but that is certainly not the case. There is no unnecessary singing, no annoying little bastard kid (living next door or otherwise), and no misplaced all star celebrity cast! Paddington eschews all of the typical kid movie dreck, and opts for being nothing short of lovely. I look forward to seeing it again.

I'm not really sure how the story goes in the books, but in the film, Paddington arrives in London after his home on Darkest Peru is destroyed. While I thought the whole it's a talking bear! thing would be a big deal, charmingly enough - it isn't. People accept that he can talk, it's Paddington himself they reject. Flatly.

Eventually, despite Dad's pleas otherwise, a family stops and offers to help Paddington. He's so gracious, and so polite, it's a wonder they don't just adopt him on the spot.  The plan, however, is to reunite the bear with famed British explorer Montgomery Clyde, who just so happened to have discovered the bears years ago. Dad, played by the delightful Hugh Bonneville, is a cautious guy, and this bear business is risky. Paddington can stay...for one night.

Email ThisBlogThis!Share to TwitterShare to FacebookShare to Pinterest
File this under A Surprise for Mr. Brown

I just took a new job seventy miles away from my house. I'm not even sure what I'll be doing (or when I'll be doing it), but with the money I'll eventually be making, I'd be foolish not to. I mean, sometimes, no matter how absurd the whole thing might be, you just gotta make some money. F--k what anyone else says.

Sure, maybe you don't hear me, but after suffering through 2014's No Good Deed, my man Idris Elba certainly does. Because financial gain can be the only reason a guy that talented (and handsome) ends up in a shit show like this.

For those of you lucky enough to not know, No Good Deed tells the story of Colin, a psychotic killer on the way to his parole hearing. It seems he's responsible for the murder of FIVE YOUNG GIRLS (they say this a lot). He might look and sound like a reformed man, but after ten minutes of a-holes essentially looking into the camera and telling us otherwise, ol' murderous Colin is sent back to prison. Apparently Con Air was overbooked, so this unbelievably soulless bastard is headed back to the pen in something Jim Bob Duggar takes grocery shopping. Good thing this van is helmed by Polite Old Black Guy and Paul Blart's angry cousin. Needless to say, after killing those two f--kers without hesitation, the first of Colin's not good deeds are done. Or his good deeds are not done. Undone? I don't even know what's going on anymore.

Email ThisBlogThis!Share to TwitterShare to FacebookShare to Pinterest
File this under No Good Movie

We are really awesome at this.

I didn't do whatever it is you must in order to make them official, but I guess I made a couple of New Year's Resolutions for 2015.  I'm not a big fan of arbitrarily setting goals, nor am I fan of reaching said goals, but this year I wanted to keep things simple.


Now #1 and #3 are clearly at odds with each other, I get that. But that second one? Well, that one I could probably stick to rather easily. I mean, it's not like I'd go and renege on all three of those resolutions just hours into 2015.  Not on purpose, anyway... 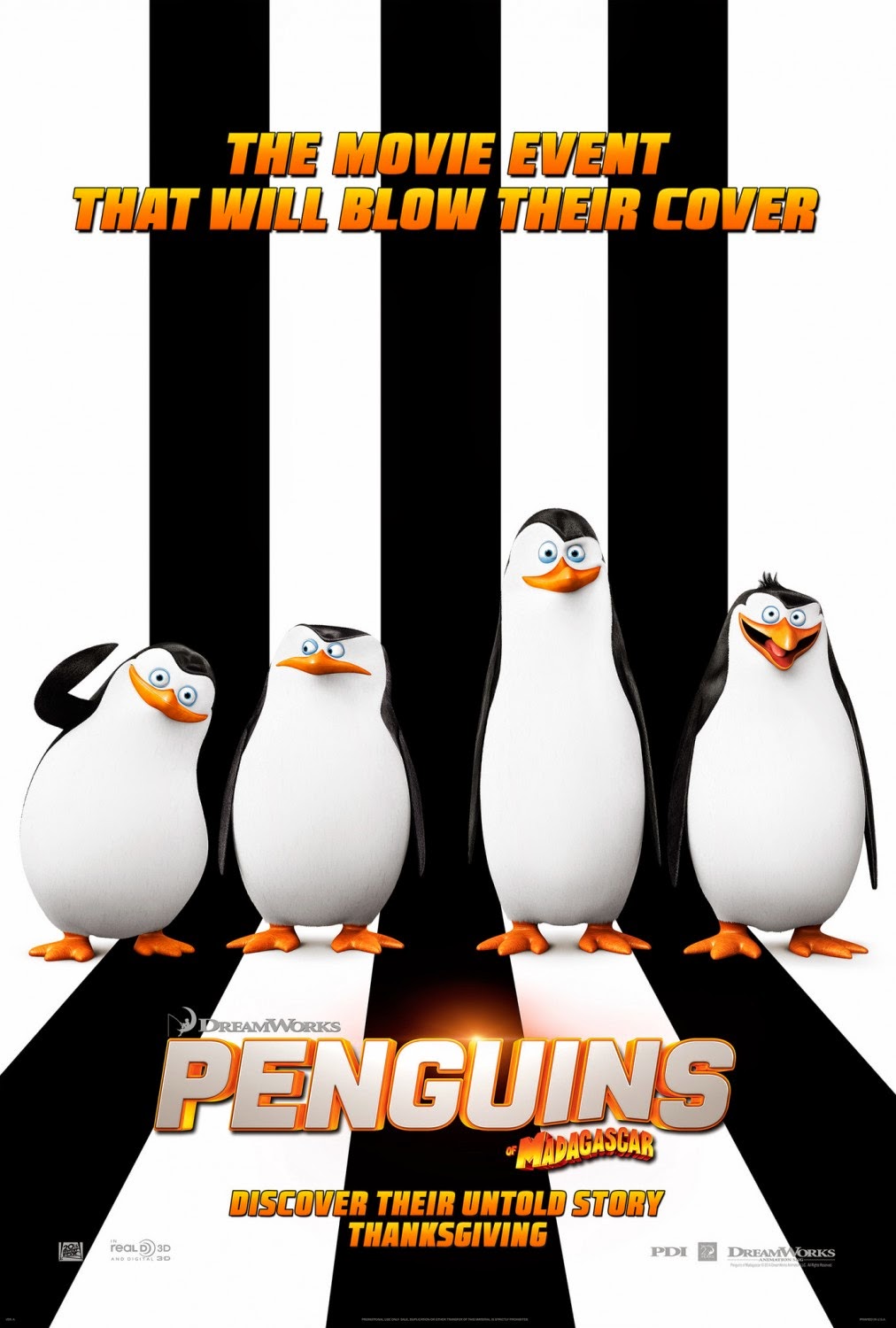 On New Year's Day, my wife and I opted to bring our son to the movies, instead of making it an afternoon among adults. And with that fateful decision came an afternoon screening of Penguins of Madagascar. Truthfully, I don't think any of us were really dying to see it. But damned if we don't all enjoy salty popcorn and dark rooms, you know?

Being that it's been almost three weeks, I don't really recall much of Dreamworks' latest animated flick. I remember it being the right kind of silly and featuring some fantastically goofy voice work, but this clearly isn't one of those movies like Up or Wall E that will resonate a decade later. This flick's sights aren't that high.

Branching off from the successful Madagascar franchise, Penguins follows the wacky foursome as they ditch the sidekick act and head off on their own adventure. It turns out a giant octopus/fellow ex-zoo attraction has decided to rid the world of penguins, after being burned by the loveable birds years prior. Skipper, Kowalski, Private and Rico are the only ones that can stop him, and concoct countless ridiculous plans to foil the eight-legged villain. As a wise man once said, hold on to your butts.