Playing fair is a joke.

I used to think the only thing worse than dying young, would be living so long that your brain calls it way before your body does. I've had some relatives that have dealt with dementia and frankly, that seems like the dickest of dick moves that life could pull. Hey, you made it old-timer, you've lived a long life, but you're going to forget everything about it. Mostly. To f--k with you even further, it'll all kinda depend on the day.

But, and just the holiest of craps, it turns out there might be something worse than either of those two scenarios waiting for me at the end. It wouldn't be my brain or my body taking everything from me.

It would be some ruthless blonde. 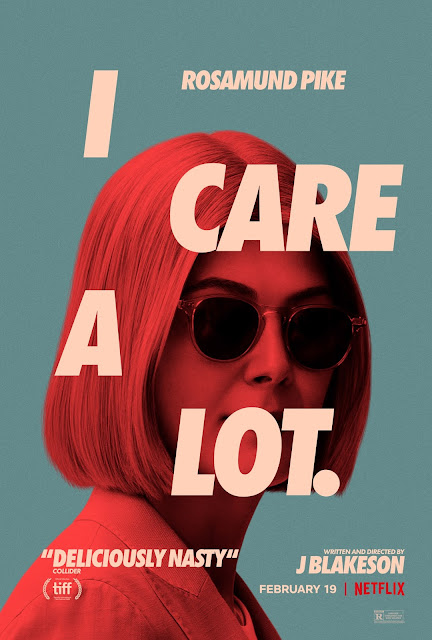 No, it's not my (lovely, ahem) wife I'm talking about silly goose, but instead one Marla Grayson, the main character of 2020's gloriously vicious horror-comedy, I Care a Lot. Starring Rosamund Pike, in a role that would win her a Golden Globe, this little story starts out as a small-scale nightmare and kind of ends up...as something resembling...the American dream.

Marla Grayson is in control. Her business, her love-life, her f--king hair, the tightness of my pants- all of it. That shit is locked down. When we meet her she's in court, offering guidance and wardship to yet another old person allegedly incapable of taking care of themselves. Aw, that's nice. Helping those who can't help themselves? Honorable, right? Uh, well...

Not in the slightest.

See, Marla, caring as she may be, is an absolute f--king shark, the top predator in a food-chain constructed of equal parts best intentions and worst-case scenarios. Her and her team are going to help take care of your elderly mum, sure, but there also going to take everything she has in the process. I'm not a hundred percent sure if it's win-win or lose-lose, but after the first fifteen minutes or so, I was damn sure it's totally f--ked up.

Email ThisBlogThis!Share to TwitterShare to FacebookShare to Pinterest
File this under Maybe Too Much Actually
Newer Posts Older Posts Home
Subscribe to: Posts (Atom)