I used to fly all the time. Usually alone, too. Once, when I was probably eleven or twelve, I remember being on this long overnight flight. We had left Honolulu and were flying over the Pacific, ultimately headed to the East Coast. I had an aisle seat in the middle section and awoke to a strange noise. To my left and up a row, a young girl, maybe nine or ten herself, was trying to open the door. At first I thought she was just pretending to do so, but then she started putting her tiny back in to it. She actually placed her foot on the door for leverage, and yanked down as hard as she could. The long red handle seemed to move, even if just a little. I frantically looked for help, or at least some form of non-verbal agreement that this was actually happening. But outside of some blissfully unaware passengers, loudly sleeping nearby, I was alone in my quiet desperation. 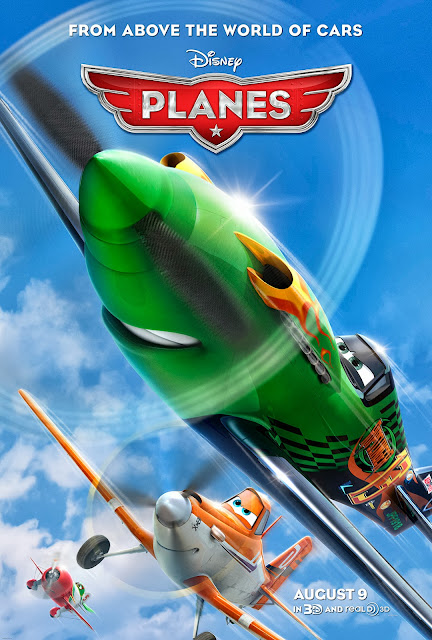 Unfortunately, I wasn't alone when I saw Planes, yet another aviation-related catastrophe I've had to endure. This time, my wife and young son were along for the ride, too. At least we weren't at 30,000 feet.

Weeks after his sister was born, we were desperate to give Matty a little concentrated face-time, and for the three of us to get out of the house. A teaser for Planes had been slapped in front of the original Cars blu ray (a movie that once played incessantly in our house). This was a flick that we basically had to see. Originally, according to this teaser anyway, the plan was for Planes to be a direct-to-video release. If only we had been so lucky.

Planes is pretty bad. Almost shockingly so. I'm sure it took years to make, and I'm sure there were hundreds of talented people involved, but the end result seems incredibly half-assed. It's all very bland, very uninspired. It's also very, and I hate to use this word, boring. It's likely the worst Disney movie to hit theaters since the cash-grabbing, Mater-fueled Cars 2 [review]. Truthfully, I was so desperate during this one, I would have welcomed that annoying tow-truck with open arms. Read that again. I wanted Mater. That's like having a knife jammed in your eye and really wishing someone would kick you in the balls, just to mix it up.

Email ThisBlogThis!Share to TwitterShare to FacebookShare to Pinterest
File this under Severely Lacking Soul Plane

It must be comforting the way that everyone hates you.

My wedding was uneventful. Well, at least in cinematic terms. No one got sloppy drunk. No one (outwardly) hated anyone else and told them off in stunning fashion. And no one slept with a bridesmaid (well, the married ones probably got lucky), either. Overall, everything seemed pretty relaxed. Though to be fair, I should probably have prefaced all of this with: As far as I know.

But then again, as every single post on this site suggests, I'm a moron who apparently hates his free time.

This film was yet another peace offering to my wife, brought to you by the good folks at Redbox. Minutes after I had completed The Numbers Station [review], miraculously, my wife tiptoed downstairs to fire this one up. Quite the double header, no? Anyway, she had been watching a shit ton of daytime TV and some unlucky bastard had been out promoting this flick. Very rarely does my ladyfriend get excited about the shit I rent, but this one was right in her wheelhouse. A picturesque wedding and a host of recognizable faces should have made for an enjoyable flick, right? Right. But then, for laughs, Robert De Niro goes down on Susan Surandon three minutes in and instantly we both realized oh, it's that kind of party. My wife? She lost interest and probably started thinking about what else she should be doing. Me? I crossed my fingers and hoped that somehow Arnold Schwarzenegger would kick down my door and put a bullet through my television/head declaring, Consider this a divorce.

Email ThisBlogThis!Share to TwitterShare to FacebookShare to Pinterest
File this under Something Borrowed Something Blew

I guess I like the idea of serving my country. Even if I don't know exactly what I do.

Days left until my wife gives birth to our second child. Games the Sox are ahead of the Yankees.
Total dollars in joint account. Movies watched per month. Completed posts.

These were the numbers that ruled my summer, in no particular order. Now, it's much simpler.

Hours till my alarm goes off. Days till the weekend.

The Numbers Station doesn't concern itself with such trivial matters. In fact, the titular numbers, though shrouded in mystery, are clearly matters of life or death. The only numbers that mattered to me, however, were 89 and 32. The former being the number of minutes in this flick, the latter begin the cents it cost to rent. 89 + 32 = Victory, for a new dad, short on time and disposable income.

Pretend for a second that you were making a movie. This movie was going to be about a washed-up hitman, sent to another country to wallow in solitude. This guy is a loner, tormented by something in his past. Even if you didn't see the poster, you're thinking John Cusack, right? Of course you are. Oh, but this is going to a direct-to-video affair. Ethan Hawke, perhaps? Well that makes sense, too. He was originally cast in the role, only to be later replaced by Martin Blank. I mention this because while Cusack's presence gives this movie a little bit of credibility, it also brings a ton of familiarity, too.

Email ThisBlogThis!Share to TwitterShare to FacebookShare to Pinterest
File this under Negative Numbers


Previously, that was uttered around my house only when the Lakers would beat the Celtics, but I remember one time where those two words swirled in my head for weeks. It was probably seventh or eighth grade and my friend Ke'ala had invited me to go camping with his family at the beach. We'd eat, we'd swim, we'd fish, then we'd swim some more before eating the fish. Outside of the Hawaiian setting, it was all rather ordinary. But somewhere during those days, somebody's uncle sat me down and showed me something. And that's when shit got real. And even though that set up sounds like something I might finally tell a therapist, trust me, it's much more wholesome you sick bastard. Much. 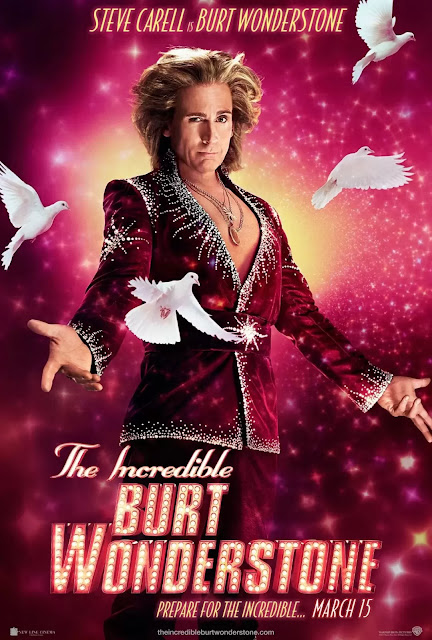 Perhaps sounding like a good idea on paper, The Incredible Burt Wonderstone dazzles in its ability to squander not only a great cast, but also a promising setup.

Casting Steve Carell, Jim Carrey, Steve Buscemi, Alan Arkin, James Gandolfini and Olivia Wilde should have been enough, regardless. Seriously. Those actors, playing themselves, having lunch and just bullshitting about the industry would have riveted me. But an even better idea? Putting them all in a flick making fun of the aging magic industry in Vegas. But, they don't make movies on paper, do they?

Burt Wonderstone (Carell), is a moderately successful magician who hasn't innovated his Vegas show in years. The crowds are thinning, and it seems the magic biz simply ain't what it used to be. However, there's buzz around a new magician named Steve Gray (Carey), who performs his act in the streets. As the interest in Steve Gray: Brain Rapist swells, Wonderstone's boss, Doug Munny (Gandolfini) thinks it's time to reconsider the top show in his hotel. Shocking no one, Burt gets canned, and bottoms out, repeatedly failing to see how much of a douche he has become. Well, at least until he meets his childhood hero, Rance Holloway (Arkin), and slowly he regains his form. From here, well, if you're smart enough to successfully have turned on an electronic device, I'm assuming you can figure out exactly how this one ends. But...then again, you're still reading this...so, yeah. There's that.