Wait, wait, wait. Did you all go to Pound Town?

There's nothing cool about turning forty-two. I'm losing my hair. I (mostly) hate my job. Oh, and uh, the whole world is basically a flaming turd bounding downward straight to Hell, inexplicably gathering more shit and flames with each passing second. But, doing some quick math, there is some good news. Being forty-two, today, in the shit-soaked depths of late 2021?

That means I was a teenager in the last great decade this planet will probably ever see: the motherf---king 1990s. *cue Ice Cube's It Was a Good Day* 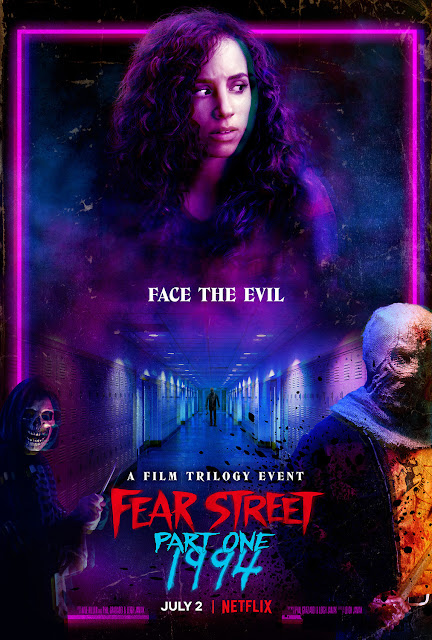 I was fifteen in 1994, so Netflix's Fear Street: Part 1-1994 gave me a much-welcomed nostalgia boner from the absolute jump. And, honestly, it was pretty much sustained throughout - the nostalgia - not so much the, well...I already mentioned my age, right? Right.

Anyway, as the first part of a trilogy, this dope little flick comes from the edgier side of R.L. Stine apparently, and is much less slappy, much more grisly. Set in a cursed town like no other (well, maybe it's a little Derry-ish), this sordid tale is an absolute pitch-perfect throwback to better days. The kids are smart, but not overly self-aware and the murder and mayhem is top-shelf.

In what feels like an extended episode of Tales From the Crypt (with a dash of Scooby-Doo because why the f--k not?), we find ourselves rolling with a leveled up version of Mystery Inc. But instead of a surly longshoreman in a haunted amusement park, this ragtag group of determined teens is dealing with a pissed-off witch and her legion of mid-level bosses. Ruh roh Raggy, indeed. If all of these kids wake up in the mornin', they gotta thank God...

Email ThisBlogThis!Share to TwitterShare to FacebookShare to Pinterest
File this under (I feel like I'm in my) Mid90s
Newer Posts Older Posts Home
Subscribe to: Posts (Atom)