I mean, have you ever actually seen your brain?

Being a middle school teacher has never been easy. Not by any stretch.

But now, the fact that I exist solely in a three-inch box on some kid's iPad (in some kid's room...yikes), the challenge feels borderline monumental. It's not the content, either, because let's be honest, no one gives a damn about any of that. What I'm trying to do, what I've always tried to do, is inspire my students. I want to show them some amazing piece of work, and then give them the tools and the desire to make something amazing themselves.

You'd think that all the technology in the world would help this process, but stylish devices and intuitive applications can only get you so far.

Turns out you need humanity. 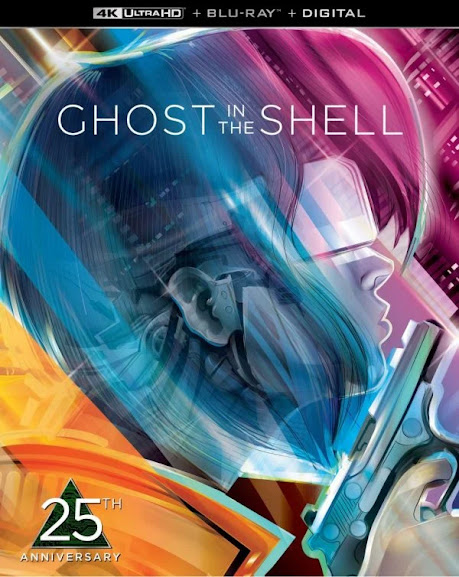 Because I was trying to fit a lot in, I lost my way a little bit in that introduction. And that's fitting because I was also a little bit lost when I sat down with the 4K version of Ghost in the Shell last week. Of course, I knew I was settling in with something visionary and the inspiration for countless sci-fi films to follow, but I didn't know it would be so...arduous.
If I followed it, which I more-or-less didn't, Ghost in the Shell tells the story of a (now) near-future where the lines between man and machine have been increasingly blurred. A cyborg agent, known as Major, is trailing some dude known as the Puppet Master, as this a-hole is hacking into 'people' and wreaking all sorts of havoc. That's the straightforward bit.
Along the way, and frankly, much more often than I would like, Major stops to contemplate whether or not she is more machine than human. If I were smarter, or weren't more into kickass mechs blowing things up, this exploration of what it means to be alive would have been some sort of geeky wet-dream scenario. But instead of damp sheets and mild euphoria, I awoke with two things on my mind: mumbo and jumbo.
Read more »
Posted by m.brown at 8:25 PM 2 comments:

Email ThisBlogThis!Share to TwitterShare to FacebookShare to Pinterest
File this under Whoa...nice GITS

I always act weird with myself.

I could be wrong, but I don't think I've changed all that much as I've gotten older. I'm on the verge of turning forty-one, and here I am, still doing the same shit I've been doing forever. Hanging out, playing Nintendo. I'm a nice enough guy, might even make you laugh once or twice. But what I won't ever do? Surprise you.

And I'm okay with that.

But I could also just be delusional.

Also entirely clueless, are Bill S. Preston, Esq. and 'Ted' Theodore Logan. Back again in Bill & Ted Face the Music, the duo from my youth are anything but dynamic. But they're nice dudes. And apparently, there aren't a lot of those left.

Being that the first flick came out when I was Ted years old, er, ten years old, I was the exact target demographic for the twenty-nine years later sequel. Like me.

A movie about two older dudes trying to fulfill the promise of their youth? Uh, yes, thank you. That is definitely my jam.

Unfortunately, the song is more of a toe-tapper, then full-on banger, as Bill and Ted's latest journey is not what I expected. But it's exactly what it should be.

Our guys aren't having some out of control adventure this time around (which is what I was hoping for), instead, they're stumbling around their mid-fifties like some mellow older dudes totally would. Turns out Bill and Ted never wrote the song that was to unite the world, and have essentially an hour and half to do what they couldn't in two and a half decades. Pressure's on, dudes. Or is it?
Read more »
Posted by m.brown at 12:21 AM 4 comments: