We're not supposed to be down here.

I want to play a game. Oh, uh, you don't have to like cut off the wrong foot or anything, just grab a pencil and some scratch paper, and number that f--ker from one to five, ten if you're feeling really saucy.

I want you to write down the things you're most afraid of. Don't overthink it, just write! We can worry about the order after the fact. I'm going to play, too. Ready? Go.

Email ThisBlogThis!Share to TwitterShare to FacebookShare to Pinterest
File this under What would you know about *pressure*?

Being almost nine-hundred posts in, I'm sure I've repeated myself on more than one occasion, but, uh, unfortunately, good luck stopping me if you've heard this one before...

Probably/sadly close to twenty years ago, I wrote something of a treatment for a zombie flick I intended to write called The Peaceful Dead.

The supposed horror-comedy would have told the (lackluster) tale of an out-of-work stuntman named Eddie, who, after banking a large settlement check from a cut-rate 'film' studio (Eddie got catastrophically injured on the set of Ninja Island, obvs) heads to Vegas to let it roll. Some major shit goes down on the strip, and Eddie ends up leaving town in a hurry. Turns out, he's being followed by film company goons to collect the cash Eddie already lost. On the way out of town, ol' Edward picks up a whacked-out hitchhiker who claims there's a fully functioning town of the undead, one that the government cut off from society years ago (the driver of the lowest-bidding toxic waste disposal company spilled his load after a masturbatory mishap, naturally). Eddie ain't buying this Area fifty...two, but after the goons catch him and threaten his life, he finagles his way out of imminent death by mentioning this alleged zombie town. He figures this location would be ideal for a horror-movie shoot, as all the effects will be real. And no stuntmen can get hurt during the process. Just some undead bastards, who happen to be going about their lives, you guessed it, peacefully.

It goes on from there, but clearly, you've heard enough.

Bad news for me/good news for the rest of the world, Shaun of the Dead came out shortly thereafter, and I immediately gave up the dream. I felt that the ideas were too similar, and Edgar Wright's flick was f--king awesome - one of my all-time favorites. Why even bother fleshing this one out (for a multitude of reasons, honestly), you know?

Somewhat surprisingly, it wasn't Simon Pegg and Nick Frost who (partly) read my mind and tore up my dream. Nope.

It was f--king Zack Snyder? 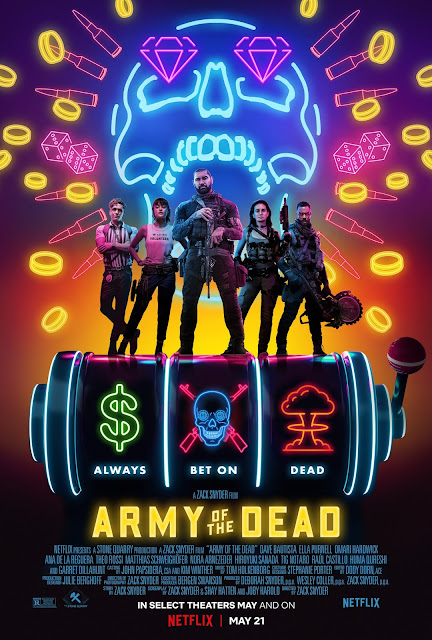 Well, sort of, as his latest offering, the Netflix-exclusive Army of the Dead, somewhat reminded me of the script, uh, I never wrote.
Snyder's second foray into the lives of the undead opens when a couple of soldiers inadvertently unleash heck just outside of the Vegas strip. The mysterious cargo wasn't aliens as its drivers had guessed, but instead a mini-Hulk looking dude, existing solely on a healthy diet of violence and chaos. It doesn't take long for the virus to overtake Sin City and its slew of hookers, magicians, and of course, hooker-magicians. Naturally, the plan is to wall the whole place off and blow it straight to f--king Hell. Seems reasonable, I suppose...
Also making small-kine sense (Hawaiians love them some Vegas), is the assembling of a ragtag squad of zombie-horde survivors, ass-kickers and masters of general unsavoriness, in an effort to breach the wall and head back in. But, uh, why would anyone want to do that, with all the biting and the dying and such? Well, when everyone got the f--k out of there, a lot of the money stayed behind, see. And the bigshot assembling the crew says there's two-hundred million dollars inside his casino's safe, and Dave Bautista's Scott Ward can keep a quarter of it. Sounds like a good deal to me, you know? Assuming everyone, uh, plays fair and makes it out alive, or at the very least not...undead.
Read more »
Posted by m.brown at 5:44 PM 2 comments:

Email ThisBlogThis!Share to TwitterShare to FacebookShare to Pinterest
File this under What Happens in Mexico City (came from Vegas)
Newer Posts Older Posts Home
Subscribe to: Posts (Atom)