It kind of feels like everything is impossible these days.

In a few short months, I will reach the point where I have been with my wife longer than I've been without her. We're hovering around the twenty-one year mark, and I'm not quite forty two. Arguably, that's the most romantic math I've ever done.

I mention this because we are long past the point of grand gestures and blindly hitting the accelerator to the chorus of Meat Loaf's I'd Do Anything for Love (But I Won't Do That). I would do anything for her, sure, but it's not like the opportunity, thankfully, ever really presents itself. I mean, it's not like there's hulking monsters waiting outside to devour us all.

They're pretty small, actually. Like, the size of Ted Cruz. 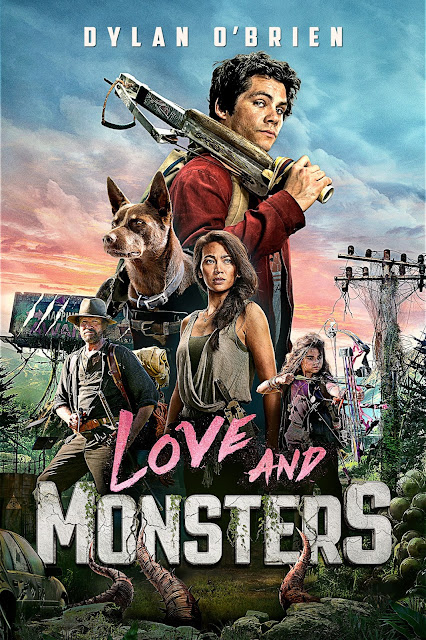 Despite writing (and speaking) like a pre-teenage girl, I wasn't overly familiar with Dylan O'Brien, and even less informed about his latest flick, Love and Monsters. Released (theatrically?) in the wasteland of 2020, and starring the affable lead from The Maze Runner trilogy (and Styles from MTV's Teen Wolf...which is/was apparently a thing), this little monster flick is gigantic fun.

Moments after romantic parked car time, Joel (O'Brien) and Aimee (the striking Jessica Henwick) arrive home to find the world in absolute chaos. Massive creatures have appeared and Hell, has officially broken loose. Joel and Aimee split up, but with the promise of seeing each other again. Uh, about that...

It's seven years later and Joel is possibly the least-valued member of a small band of survivors, all of whom are hiding out in a fairly rad underground bunker. Seems mankind attempted to nuke the monsters, but it didn't work, and not only was everyone forced underground, but the radiation mutated whatever the Hell is still living on the surface.

One day after a pretty costly breach, Joel, not so much alone but very much single, manages to contact Aimee after all these years, and makes a very hasty decision: he has to get to her. Unfortunately, she's 85 miles away, and if Joel were a bear, he'd be more Paddington, less Grylls.

But love is love. Rather than live for nothing, he'd rather die for something, you know? So off he goes.

Email ThisBlogThis!Share to TwitterShare to FacebookShare to Pinterest
File this under Your Poke-balls ain't big enough

I don't know where this is headed, but my daughter, Violet, is a lot like me. A lot a lot.

In addition to being annoying and overbearing, obviously, she's smart, silly, and when she's interested in something, it becomes something just short of an all-encompassing obsession.

A couple of months ago, she had to catch 'em all, and all we would/could talk about is Pikachu, Eevee, Scorbunny and the like. But now, thankfully, she's moved on the Wizarding World of one Harold J. Potter. Once she got wind of all things Hogwarts, it was over. She politely demanded we watch all the movies immediately, and I said we could, but only if she read the books first. Well, at least the first two (I cut her some slack, she's seven).

And she did. Immediately.

After revisiting the first three Harry Potter flicks with Violet, this was, perhaps shocking to you dear reader, my first time seeing Harry Potter and the Goblet of Fire. I was a little late to reading all the books, but once I started, I read them consecutively. This level of dedication didn't translate to the films, apparently.

Oddly enough, and I know I'm in the vast minority, but Goblet was my favorite book. How it was the only movie adaptation I missed is beyond me. I guess I was super-busy in '05...

Unless I'm reading the room incorrectly, isn't this the flick that most people consider the worst in the franchise? Maybe you hardcore types can point out the inconsistencies or whatever, but coming back to it a decade and a half later was an absolute blast. Especially when you take into account that I had my young daughter along for the ride. And, AND, I had no idea that Team Edward was in this. Holy moly, I didn't expecto that patronum.

Screw you, guys. Anyhow, not that anyone cares anymore, but is there anything cooler than the Tri-Wizard tournament? No, no there is not. In my head it was rad enough, but actually getting to see it play out with the best effects that 2005 could muster was a seriously good time. Honestly, it's hard to really evaluate any of this, as the Nostalgia Machine was cranked to eleven, leaving me impossibly stoked to see something 'new' from the old gang. And having Violet there squealing along with me? Can't beat it. It's impossible.

Email ThisBlogThis!Share to TwitterShare to FacebookShare to Pinterest
File this under Is Hogwarts hiring?
Newer Posts Older Posts Home
Subscribe to: Posts (Atom)