Nothing worse than going through this shit alone.

F--k me, now more than ever, the days all seem to be the same.

Nothing much stands out from one day to the next, as quarantine (or whatever the f--k we're [somewhat] doing is called ) has essentially eliminated anything even close to special from happening. I don't really go anywhere ever (other than Lowe's to buy paint), and my social life consists of the occasional short conversation with the same five or six people (mostly about going to Lowe's to buy paint). It's just an endless cycle of not much.

But the really weird part? I kind of like it. 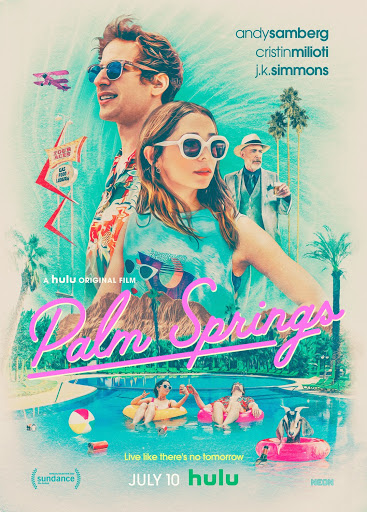 Much more than kind of liking, I straight up f--king loved the Hulu-exclusive film, Palm Springs. The latest entry into the burgeoning time loop genre, this charming little flick is an absolute blast from start-to-finish, even if it it ends, uh, basically... where it started?

Andy Samberg fully delivers as Nyles, an initially apathetic dude attending a wedding with his lame girlfriend at a resort in Palm Springs. When we first meet him, Nyles is equal parts The Dude and Yoda, coalescing into the quintessential  enlightened slacker. He doesn't really seem to give a f--k about anything, until he delivers what some will regard as the best wedding toast ever. Wait, this guy's smart? Uh, sort of.

Turns out Nyles has been living someone else's special day over and over again, and he's gotten pretty f--king good at it. So much so, he's actually pretty f--king bored with it. But when he inadvertently gets Sarah, the maid of honor also stuck in the time loop with him, perhaps shockingly, everything is about to change.

Email ThisBlogThis!Share to TwitterShare to FacebookShare to Pinterest
File this under Happy Groundhog Death Day

Prior to meeting my wife, there had been many women I had wanted to have sex with. Many.

Clearly, as the adult writer of a blog, I wasn't all that successful, but it was never for a lack of trying. Being that I didn't drink/smoke/sniff glue or whatever, I always had to play the long game, as chance encounters were few and far between. For my wife, I pulled out all the stops: poetry, thoughtful gifts (maybe a mix tape or seven), ten-hour AIM chats across five time-zones, you name it. Hell, I once filled my entire apartment with red and pink balloons (like knee deep) so we could spend Valentine's Day getting high off of the smell of latex together. Aw, sooo romantic (/corny).

What a waste of f--king time. Literally.

Turns out all I needed to do to hump her for hours was kidnap her and throw her off a goddamned boat.

Oh Getter, look what you made me do. See, one of my blogging heroes casually mentions one day that she just watched a terrible movie filled with female nudity, and for the desperate proprietor of Two Dollar Cinema that's essentially like cranking up the f--king Bat Signal. Except instead of a handsome millionaire descending into his cave of weaponry and technology, it was an old fat guy shuffling off to his basement with a journal and a box of tissues.

Oh, dear reader, that was (mostly) a joke, which is fitting, because this f--king movie is utterly (and unintentionally) hilarious. Like an hour and fifty-five minute commercial for cologne for your boner, 365 Days is quite possibly the most inexplicable phenomenon I've ever laid my pathetic eyes on. Imagine 50 Shades of Grey [review] minus all the subtlety and nuance. Or if a European sex robot managed to write a screenplay. However this was created, after watching it, you end up f--ked. Hard.