Is it really over?

I don't know what it's like where you are (probably better, I'll assume), but in my part of Pennsylvania, in terms of quarantine stages, we've just recently moved from RED to YELLOW. For some people, this move down down the rainbow doesn't mean much of anything, but for fellow mask-wearing anti-Americans like myself, I think it means we can kind of go back to a version of normal life. Sort of. Small gatherings are cool again, childcare is open, retail stores are back...I mean, wow, right? I'm sure everyone will be totally be responsible and this quarantine thing will all be a distant memory.

In honor of crowded beaches and everything working out just fine, I'm going to suspend COVID-19 Cinema at the conclusion of this post. F--k you coronavirus, full-length features are back! Uh, once or twice a month.

Because, as good science will tell you, if you get bored of doing something, stop doing it, jackass. Even if it was totally working. (and even if you weren't bored) 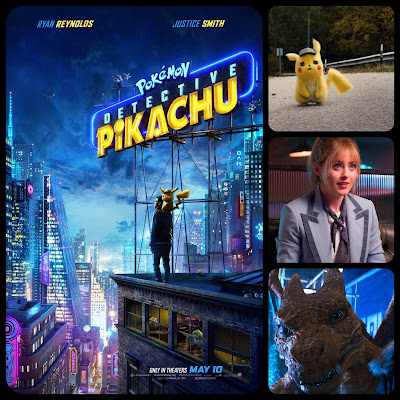 I was in college when the Pokemon craze hit, and outside of some enthusiastic friends of mine that played it ironically (sophomore year, sigh), I have little personal experience with Pikachu and friends. My son has Shield...or Sword, but that's about the extent of it.

But when I saw the trailer for Detective Pikachu, I was in, not only because it looked cool, but I figured it might be another avenue to reach the requisite weird kid in class, because that little a-hole typically eats and shits all things Jigglypuff.

Turns out, my 6 y/o daughter Violet might just be that weird kid, and has taken to catching them all. Okay, not really, but she digs it enough so it was time to finally sit down and see what the Hell this is all about. And after seeing it? Honestly...uh...I still don't know.

As far as I can tell, there is a world (or a place) where every human has a Pokemon, and they all kind of co-exist. Some kid's estranged father dies  mysteriously (shocker), and he has to investigate what happened to his dearly departed dad. The kid doesn't really know where to begin until he meets a Pikachu, who for some strange reason...he can fully understand. From there? Yeah, no clue.

Yay: There's a sequence early on where enraged monkey-things are attacking and it's, well, bananas.
Boo: I love Ryan Reynolds, but this dude's voice it too damn distinct to be Pikachu. I half expected his to drop an f-bomb and electrocute someone's balls off. (the Boo is that he totally didn't)
Homeschool Lesson of the Day: See, kids. Even Pokemon use primary sources in their research.

Email ThisBlogThis!Share to TwitterShare to FacebookShare to Pinterest
File this under (try not to catch anything)

They are surprisingly effective goofballs.

I love dogs. And I'm pretty sure I always have.

When I was little kid, we had a mostly-black German shepherd named Pharaoh, and he was the best dog ever. Until I got my first puppy that is, and Koko then became the best pup the world. Okay, she actually wasn't , as that damn dog was bananas and died horrifically, but for as long as I had her, I loved her (honestly, I remember very little about this dog, which is probably my brain doing me a huge favor as I was a little kid home alone it happened).

Then, friends, dreams do come true. We got Monty. Or Montgomery, or during formal events, Montel, the runt of a litter of Gordon setters, who was, without a shred of a doubt, the greatest dog the planet had ever seen. I had moved to college by then, but summers and Christmases?

Oh, that was Monty Time. 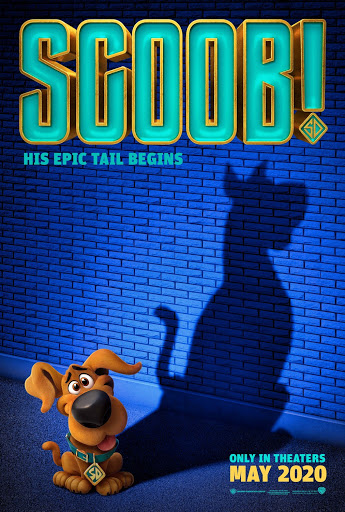 While the above explains how I got here, Scoob!, the latest entry in the theater-in-your-home experiment explains the origins of Scooby-Doo, another dog I've always adored. Well, it tries to...just not very hard.

Maybe there were other trailers that I didn't see, but I was kind of shocked when this alleged origin story abruptly (but thankfully) ended and an updated version of the TV show's theme song kicked in. Then, it was suddenly modern day Mystery, Inc., and away we went. Pup Scoob and young Shaggy were more like a short film that played before the real feature. Again, thank goodness, because I wanted to punch little Shaggy in his whiny face. We get it, kid - you don't have any friends. Don't be such a dick about it.

You guys, this show was my jam as a little kid, so there's no way I wasn't going to like this movie, but for whatever reason, instead of being about ghosts and a haunted amusement park, it's equal parts outer-space adventure and Hanna-Barbera world-building exercise. If you dug Wacky Races (like I did, sigh), seeing some of these old characters dusted off is momentarily, um, ...exciting, I guess. Or it would have been, but I dozed off three-quarters of the way through (on the first watch).

I enjoy staying in my house. By choice.

Well, I did, but this mandatory stay-at-home order is getting a bit tiresome, if I can be honest with you. Now, don't get me wrong, I'm not so angry about quarantine that I'm going to get an assuault rifle, camouflage up and order a five-dollar footlong with my like-minded a-hole, friends. No. I'm just going to be quietly disapointed like a regular person, stay the Hell home, and cross my damn fingers that no one I care about gets sick. I mean, don't these f--kers realize it could be much, much worse than being at home all day?

And I'm not even talking about the coronavirus. 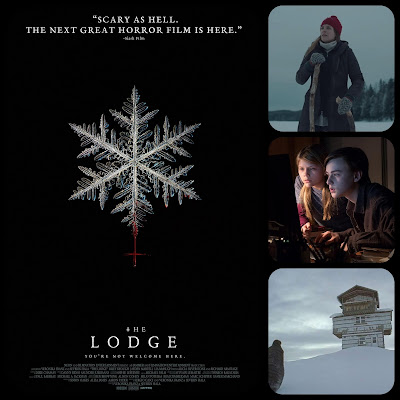 Because it makes no sense.

Hanging out with your Dad's new girlfriend probably sucks no matter how you slice it, but in The Lodge, this unenviable scenario is cranked to infinity.

Mia and Aidan have just recently lost their mom (to put it mildly), and for whatever reason their father thinks it will be a solid plan if they spend some time with his soon-to-be new wife, Grace, in a remote cabin in the woods. Being that this guy is obviously incapable of reading people, let alone the room, it's a bit shocking that he's an accomplished author. Oh, it should probably be noted that Dad writes about suicide cults...which..is where he met Grace, the lone survivor of some Heaven's Gate type of shit. Wait, what?

Yeah, and if picking up chicks at the scene of a notorius mass suicide weren't a red flag, the fact that he leaves this woman alone in the middle of nowhere with his still-mourning kids just might be. At least he gives her a loaded gun (that she's all too good with). I'm sorry, did you say a loaded are you f--king kidding me?

(this movie is super f--ked up and all kinds of creepy, but to be frank, the setup is so inexplicable, any rational thought sort of cuts the balls off of all of this, you know? But impossibly improbable or not, it's still beyond unsettling at times, which seems like exactly what you horror f--kers are into these days...with your scurrying devil moms and your build-a-bear boyfriends)
Yay: Hell, yes! Alicia Silverstone, the one time love of my life, is in this!
Boo: Well, she was.
Homeschool Lesson of the Day: Turns out, you can actually drive a crazy person insane.

Email ThisBlogThis!Share to TwitterShare to FacebookShare to Pinterest
File this under The only thing we need to re-open is the door

I'm having a birthday party, but you're not invited, but you can come if you want.

Today is Two Dollar Cinema's ninth birthday, and as is the time-honored tradition, it's time to look back on the year that was. Prior to the world-crippling pandemic we currently find ourselves in, this past year was, to put it mildly, an absolute f--king shit show. Wait, what?  Did you just say prior?

But with the unwavering support of a select group of people (and a little help from my kids, shockingly), I was able to go from hanging it up to hanging in, and managed to keep this train on the tracks. And once again, this post is dedicated to them. But more on that in a bit...

In the last twelve months, I managed seventy new films, which comes out to about every five days. While those numbers may seem slight to some of you, that's actually eleven more than the previous year. Forty three were in the theaters (remember them?), ten were Netflix exclusives, with the rest being a disc I bought or some other streaming service. And whatever the Hell Trolls: World Tour counts as, I'm not really sure (I'll check with Brittani, being that she loved it so much).

For brevity reasons, here are my top ten films from the last year in an order I would best describe as...flexible, followed by my bottom ten films. The word I would use to describe them? Competive.

Email ThisBlogThis!Share to TwitterShare to FacebookShare to Pinterest
File this under Bottom of the 9th

If theater's don't come back, or come back in a way that violently fondles your baggage TSA-style, I'm sure as Hell going to miss them. Though, that's probably utterly f--king obvious as your reading this on my movie blog.

I'll miss the popcorn and the soda (even though I gave it up), I'll miss the same shitty M&M's commercial from the late 90s, shit, I'll even miss the guy that haphazardly tears my ticket and then struggles to tell me what side of the hallway theater 9 is on (it's okay, my guy, I'll figure it out). But what I will miss most of all? That screen and those speakers. And the fact that every release...

...will basically be direct-to-video. 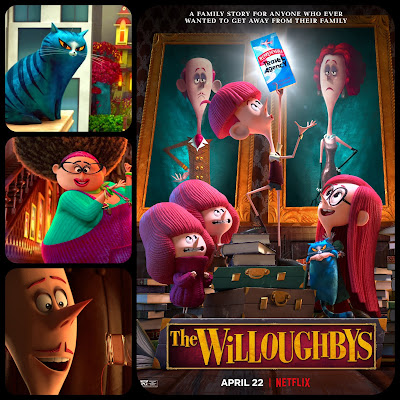 I gotta say, I wasn't really feelin' this one from the beginning. I know the times they have a changed, but even the best Netflix stuff still feels like direct-to-video entertainment, you know? And if you're a forty-year old jerk, that ain't exactly a compliment.

But in the case of The Willoughbys, the real drag isn't that it's sucky, second-tier flick ainmation. Actually, my real gripe is that it was never available to see in theaters, because I'd imagine it would have been a sight to see.

If you don't know, and I sure as Hell didn't, The Willoughbys is a pretty twisted story. There's this family of red-headed oddballs, where the kids are absolutely loathed by their parents. In order for a better life, the kids actually want to be orphaned, and send their parents on an epic vacation that will hopefully kill them. Shocking no one, the plan doesn't exactly work, and ten minutes into the flick, you can pretty much lock down exactly how it'll end. It's all incredibly weird, but fun. And even though it's state-of-the-art visually, The Willoughbys has a very Roald Dahl/Shel Silverstein throwback vibe.

Yay: The Nanny (Rudolph) turns out to be the absolute best character ever, and I didn't see it coming.
Boo: Man, not only is Dad (Martin Short) a giant a-hole, but his throat thing is super unsettling.
Homeschool Lesson of the Day: Sometimes you actually find everything when you lose it all.

Email ThisBlogThis!Share to TwitterShare to FacebookShare to Pinterest
File this under Using a Condom Could Save Your Life
Newer Posts Older Posts Home
Subscribe to: Posts (Atom)