The guy practically lives in a Clue board.

There are a lot of things that suck about being a teacher. Like, a ton. But depending on the day (of course), one of the worst things that can happen is some seemingly stupid kid handing in something brilliant.
They've sat there for the entire marking period, making fart noises or playing that damn tapping game on their iPad (the goal is to tap the screen...that's it), and all of a sudden, out of nowhere, they just absolutely destroy an assignment. A carefully thought-out response that includes relevant evidence and maybe even a dash of dare I say...style? It's as beautiful as it is maddening.
I mean, if this is what you're capable of, what the Hell were you thinking before? 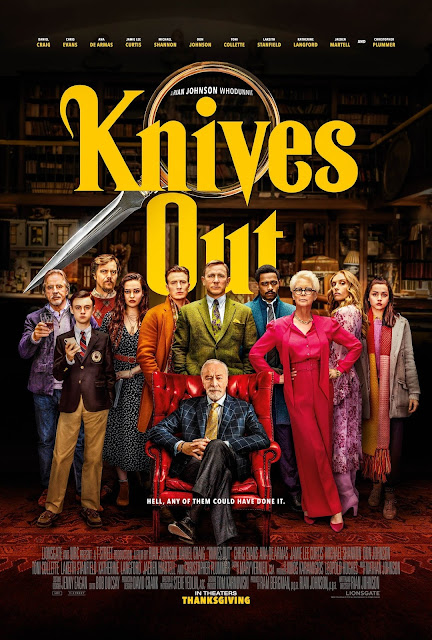 My wife and I actually managed to see an early-screening of Rian Johnson's Knives Out, hoping to avoid any spoilers before it hit everywhere, and in that sense - mission accomplished. The secondary objective of the sneak peak was that I'd get this published before it hit all the screens, but that's a negative, Ghost Rider. But, trust me, that was the only negative.
Maybe it was the buzz of being early, or maybe it's just that this movie is really f--king cool, but I don't think I could have enjoyed Knives Out any more than I did. Quick, clever and just so much fun, this whodunit is easily one of my favorite films of 2019. But it also makes me furious, but more on that in a bit.
In a setting fit for one of his murder mysteries, legendary writer Harlan Thrombey gathers his massive family at his home to celebrate his 85th birthday. Unfortunately (depending on who you ask, of course), ol' Harlan doesn't make it to the next morning, as sometime during the evening, the old man is murdered. Almost immediately, a private investigator named Benoit Blanc shows up to solve the mystery, which is good news, though it might help if anyone knew who hired Blanc in the first place.
Read more »
Posted by m.brown at 1:12 PM 4 comments:

Email ThisBlogThis!Share to TwitterShare to FacebookShare to Pinterest
File this under My Mind Went Blanc

Volkswagen.
Jeep.
Hyundai.
I'm not entirely sure if these car companies are based on some eccentric automotive legend or not, but either way, I don't really give a shit (though Mr. Hyundai sounds remotely intriguing). Regardless, these are the (imaginary?) dudes I've rolled with in my illustrious two-and-a-half decade driving career, which when put into Google translate, comes out to he doesn't know anything about cars and/or doesn't have a good job.
And that's totally......fair. 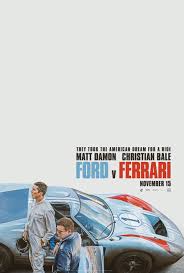 But better than fair, perhaps even far better, would be James Mangold's latest biopic, Ford v. Ferrari. Seen with an old man (and an old kid) after Midway (of all movies!) was sold out, this Matt Damon and Christian Bale...wait for it...vehicle...was an absolute crowd-pleaser. And I should know, because I was sitting in the very back corner of the theater and could see absolutely EVERYONE.
[if we didn't split up, we were going to leave...and I couldn't let that happen]
After a hilariously failed bid to buy Ferrari, Henry Ford II (hereby referred to as The Deuce) angrily assembles a team to build, and I quote, the best motherf--kin' racecar in the history of this motherf--kin' planet, goddammit. Fine, he didn't say that, but it wouldn't have been the first artistic liberty taken, I can assure you.
Anyhow, The Deuce's team comprises of some men whose gib have cuts that are quite likable, namely Carroll Shelby (Matt Damon) and Ken Miles (Christian Bale). These two guys, kind of the Cousin Larry and Balki Bartokomous of the automotive industry, are tasked with designing a racecar that can win LeMans, the highly prestigious twenty-four hour road race.
Read more »
Posted by m.brown at 11:24 PM 13 comments:

Email ThisBlogThis!Share to TwitterShare to FacebookShare to Pinterest
File this under Have you driven a Ford...ever?
Newer Posts Older Posts Home
Subscribe to: Posts (Atom)