I think it took the first one less than five minutes to firmly establish its hard R rating. Whether it was the incessant profanity, the rampant sexual innuendo, extreme graphic violence or even the onscreen butt sex - whatever offends you the most (or least), the original had it all. And despite all of my eleven year old students having seen it more than eleven times each - it certainly wasn't meant for kids. But the sequel? 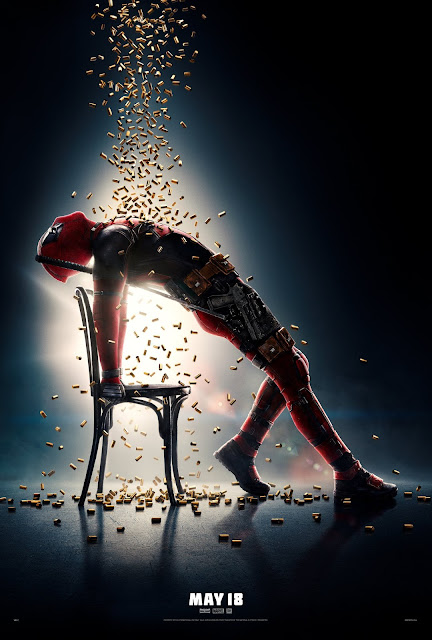 I loved Deadpool 2. F--king adored that shit. After being That Guy in regard to the first one [review], I reluctantly strolled into the sequel weeks after the fact and damn near moonwalked the f--k out of it. Maybe it was the lowered expectations, maybe it was the (at the time) almost-summer magic. Or maybe, just maybe...this movie was really, really f--king good.

Screwing with the timeline once again, Deadpool 2 more or less begins with Wade Wilson blowing himself to a million f--king pieces. He's trying to convince us that despite his severed head slowly tumbling through the air, that what we're watching? Is actually a film about family.

Wade and Vanessaaaaaaaaaaa sorry...drool makes the keys stick) are planning to have a baby when unsurprisingly (for a murderous mercenary), shit goes very much sideways. Very bad things occur, and Wade finds himself begrudgingly joining the X-Men as a result. On his first assignment, trainee Deadpool encounters a young mutant in the middle of a fiery meltdown outside of an orphanage/treatment facility. Almost instantly, Wade senses the kid's (f--king Ricky Baker, y'all!) being abused and kills one of the staff members in the scrum. They both get locked up, and not long after that, all Hell breaks loose. Again.

Email ThisBlogThis!Share to TwitterShare to FacebookShare to Pinterest
File this under God that's lazy writing.

The Matrix.
The Terminator.
Blade Runner.
Wall-E.
I, Robot.
iPads.

Movies have been telling us for years that machines will eventually take over and enslave us. And life, generally, seems in agreement.

But, uh, between you and me, who gives a shit? I mean, if it makes life better *checks phone*...can it really be that bad? Might as well throw our hands up roller-coaster style and enjoy the downward spiral *checks phone again* ...together? I'm sorry, what were we talking about? 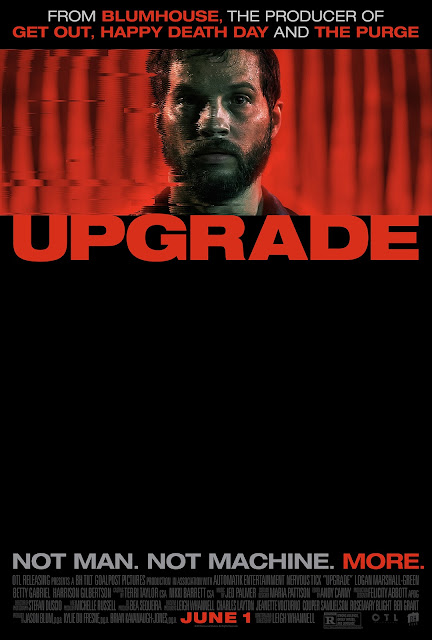 Oh, right: Upgrade, that sneaky f--ker of a flick. Definitely low-budget but possibly high-concept, writer/director Leigh Whannell has crafted the ultimate cautionary tale in the continuing saga of man v. machine. This time, however, the man is the machine. Just not at first.

After dropping off a fully-restored muscle car to his mysteriously mysterious client, Grey and his beautiful wife Asha head home in their driver-less vehichle. Apparently, Siri's been drinking and instead of Jesus taking the wheel, no one does. In fact, all Hell breaks loose and our happy (and mid-bang) couple is involved in an epic car crash. Good thing they've careened into the hobo section of the highway, where the greasy denizens desperately want to help Grey and Asha.

I'm sorry, I think autocorrect malfunctioned. That shouldn't have read help. It should have been f--king murder.

But as homicidal a-holes tend to do, it seems they didn't finish the job entirely, and Grey wakes up a quadriplegic. A suicidal one, at that. Realizing that his wife is gone, Grey emphatically wards off anything that could prolong his miserable life, and repeatedly tries to end it all. Too bad the machine that administers his meds is programmed not to kill him. Yep, first a machine nearly killed him, and now one won't let him die.

Email ThisBlogThis!Share to TwitterShare to FacebookShare to Pinterest
File this under Cries of the Machines

If you lined up all the fictional character in the world, there would only be a handful I need an orgin story for. Continuing their story? Even if it's way after the fact, sign me up. Because in order to create an established character's beginning, you inadvertently destroy all tension and peril along the way. I mean, obviously, they're gonna get out of whatever jam they're in, thrilling as it may be.

And even if we're all good with the fact that we know how it ends, can we talk about the casting of a prequel? No matter what, it's gonna be distracting. Do they look the part? Do they sound right?

Are the still almost eight feet tall and covered in luxurious hair? 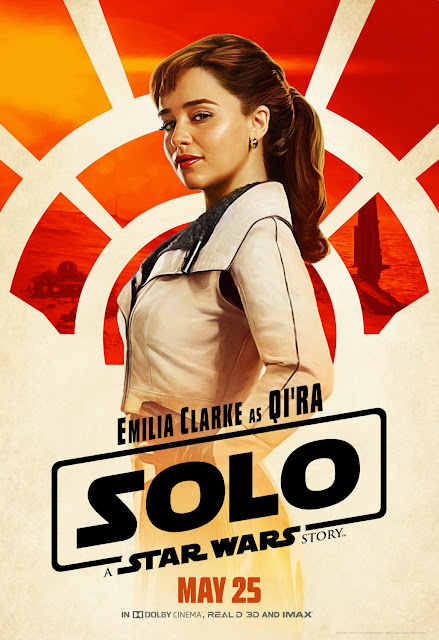 You can revel in the financial failure of Ron Howard's Solo: A Star Wars Story all you want, but even without any real dramatic tension (or that f--king guy from The Age of Adaline [review]) - I still had a good time with it. Yes, it might be a case of too much, too soon - I get that, but I think we might be unnecessarily bashing the latest Star Wars flick. I mean, it has Chewbacca in it for f--k's sake. Who doesn't love a goddamn wookie?

While a fraction of that is a joke (a very small fraction), outside of Woody Harrelson being in a Star Wars movie (I'm still coming to terms with this) or the general hotness of Emilia Clarke (also hard to believe), frankly I'm all in on all things Chewie. From his initial meeting/battle with Han, to his decision to help his, uh, people (and everything in between), maybe this prequel wasn't warranted, but Chewbacca's MVP award for it, is.

In case you were wondering about non-wookie matters, here goes: Young Han Solo vows to return home after attempting to escape his shit life in the downtrodden underbelly of Corellia. The last second failure forced Han to leave behind his lovely lady Qi'ra, so he enlists in the Imperial army in hopes to eventually get back to her. After a few years/few bits of narration, his plan goes tits up however, and Solo ends up deserting the army and joining up with a gang of unscrupulous smugglers instead.

Email ThisBlogThis!Share to TwitterShare to FacebookShare to Pinterest
File this under Millenial Falcon

The living are not permitted here.

Except for, you know, dealing with children, teaching Ancient Civ rules. For the most part.

While dawn of man/Mesopotamia is kind of lame, the Code of Hammurabi is beyond rad. Egypt is a good time, sure, but China tends to drag (remember these are eleven year-olds). So does India. And the Hebrew Kingdoms. And everything else that comes before the Greeks.

Everybody loves Greece. The inventions, the battles, the impact on government (just kidding, no one cares about democracy anymore) - THE GODS!?!?! Damn near all of it. But what they love the most? What they will actually stop talking (about Fortnite, mostly) for a few moments to learn about? The myths.

Too bad most of them are beyond filthy.

I mean, try explaining the origin of the minotaur to a room full of pre-teens without getting arrested.

If only they made a family-friendly movie set in contemporary times that featured mythological beasts and dabbled in Greek history just enough to be passably relevant to an administrator who decided to see how things were going. 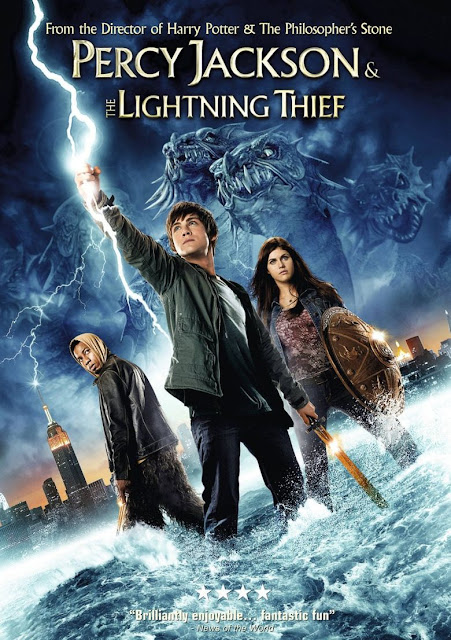 Somehow, even in a teaching career spanning more than a decade, I had managed to avoid seeing Percy Jackson & the Olympians: The Lightning Thief. Maybe it was the fact that my former grade-level partner showed it every opportunity she was given (jesus, lady - other movies exist, for f--k's sake), or maybe there was something about the idea of  potentially/definitely leering over a young(ish) Alexadra Daddario in a room full of children that didn't sit right with me. I mean, a creepy old guy lusting after a beautiful young maiden?

Outside of his affinity for water and crippling dyslexia, Percy Jackson seems like your typical high school kid. That is he did, until, on a field trip, his teacher turns into a Fury (think winged, lady-demon) and tries to murder him. Turns out, probably after the Under the Sea dance (*nudges you with elbow* huh? huh?), Percy's mom bumped uglies with Poseidon and boom, a demi-god was born. But with great power comes great culpability, and it appears that Percy is the prime suspect in the disappearance of Zeus' coveted lightning bolt. To clear his name, PJ and his crew are going to have to go on an modestly-budgeted/epic journey filled with modern versions of ancient legends.

You get all that? Me neither. But Daddario shows up swinging a sword and nothing else mattered. Not even the fire drill that took place during the film. Mr. Brown, *shakes shoulders* Mr. Brown! WE HAVE TO LEAVE.

Email ThisBlogThis!Share to TwitterShare to FacebookShare to Pinterest
File this under Sorry Ms. Jackson

Mom, why did you do this?

I knew this couple in college who seemed to have it all figured out. Smart people, athletic, attractive - just two solid individuals, you know? And while Pete and Michelle basically nailed college, it was after graduation where they reached hero status. I caught up with these delightful bastards at a wedding years later, and between beaming smiles and hand-holding they let me (and my wife) on a little secret: They shared a job.

One job. That they each took turns doing. Just not at the same time. And never together. 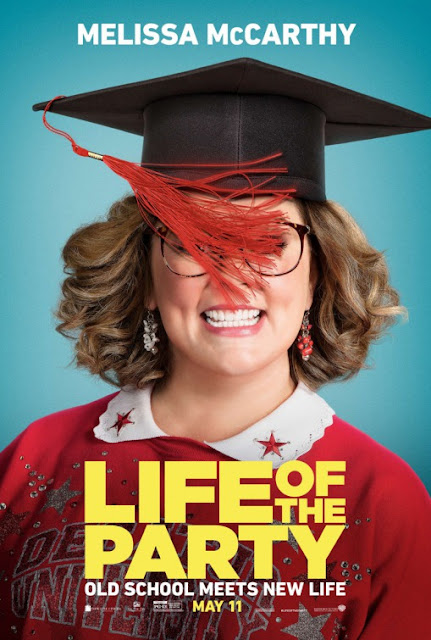 Dear (Movie) God, I wish that Ben Falcone and Melissa McCarthy would follow Pete and Michelle's lead, and never, ever work together again. Each of them seem like fine individuals (full disclosure: I adore McCarthy), but when they work the same movie at the same time, moderate to intense failure seems like the only result. Unless you count a trailer full of decent bits as mission accomplished, that is.

Life of the Party may have been one of the most boring/uneventful films I've seen in years. And trust me, that's saying something. Where the concept could/should have worked, for whatever reason (and outside of a few bits of inspired lunacy), it all falls shockingly and desperately flat.

If you somehow missed the trailer (you lucky jerk), here's the setup: Doting mom/loving wife Deanna decides to go back to college after her douchebag husband unceremoniously dumps her sorry ass. As she had to put her life on hold twenty one years ago, ol' Mom fell just a few credits short of a degree, and with all this time on her hands, welp, it's Back to School she goes. But with nary a Triple Lindy in sight.

Email ThisBlogThis!Share to TwitterShare to FacebookShare to Pinterest
File this under Another Semester at F.U.
Newer Posts Older Posts Home
Subscribe to: Posts (Atom)