My grandfather, Richard Brown, passed away last week at his home in Bristol, Connecticut. He was surrounded by two of my aunts and two of my uncles, and apparently it was as peaceful a passing as one could ever hope for. He made it a day past his 92nd birthday, which was two days after I turned 38. Shocking no one, I was sitting in a movie theater when I got the call.

I didn't answer my phone, but seeing that it was my own father calling from Hawai'i (and it was not on a Sunday), I knew the contents of the voicemail awaiting me. Though I'm sure he made his fair share of mistakes, and was far from a perfect man, he was an excellent grandfather. He always had time to listen to my nonsense, but even better, he had time to tell me some nonsense of his own. And when one of his ridiculous stories would end, he'd often sum it up with a favorite go-to phrase:

Had he been sitting in the third row with us (shoot, maybe he was), my grandfather could have turned to my wife and I and used his old punchline once again to perfectly sum up how we, attending our third consecutive Harrisburg-Hershey Film Festival, felt as each short ended. All of the films were well-made, and one could assume, deeply personal, but as likely the only people in the sparse crowd not in the cast or crew of the entries, it's safe to say we didn't enjoy them as much as everybody else seemed to, you know?
Read more »
Posted by m.brown at 11:45 PM 6 comments:

Email ThisBlogThis!Share to TwitterShare to FacebookShare to Pinterest
File this under Short Films/Long Life

That's not something you get to talk about.

Last year, I had just enough time to see Sully [review], and when I returned to work that night, I was rattled to say the least. I had to meet and greet the parents of my new students less than an hour after sobbing my way through the Miracle on the Hudson and I recall not really giving a damn about what anybody was saying.

This past Wednesday, a day shy of one year later, I managed to sneak in another flick before the dreaded Back-to-School Night kicked off. I wasn't the shell of a person I was in 2016, but my head clearly wasn't fully in the game (not that it ever is). See, it's hard to talk about some kid's future...

...when you've just spent two hours thinking about your own kid not having one. 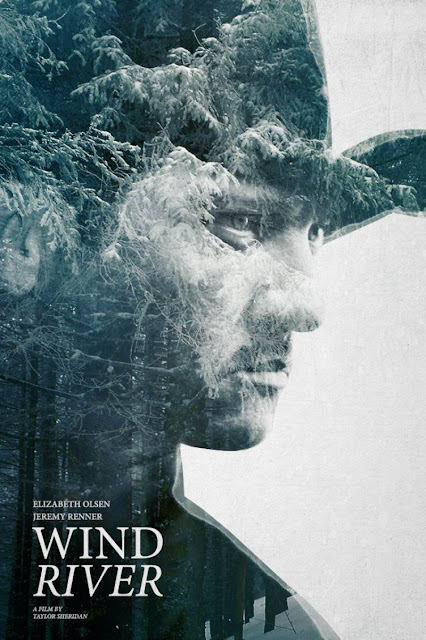 Wind River, despite being set in the cold, hopeless dead of a snowstorm is an absolute f--king fireball of chaos and anguish. Anchored by men who've seen it all but don't say much, writer/director Taylor Sheridan's latest film is one of the best films I've seen in quite some time, and easily the highlight of the summer. But didn't you see it on back to school night, dickhead? Hey! Get that logic the f--k outta here.

I don't imagine working for the Fish and Wildlife Department is typically a life-or-death job (unless, you know, bears), but when Cory Lambert (Jeremy Renner, cementing his status as the absolute f--king man) is recruited by FBI agent Jane Banner (Elizabeth Olsen, incredible as always) to help with a homicide case, the body count has just begun. And while the people we'll lose along the way will certainly sting, it's the people that died along time ago that absolutely destroys us.

Cory is an expert tracker, with not only a vast knowledge of the unforgiving Wyoming landscape, but also an expert of many of the people that make their home on it. When Banner shows up to the Wind River Indian Reservation to investigate a homicide, it's pretty clear she ain't exactly dressed for this party. She's smart and incredibly resilient, but she's young. And these old men aren't exactly thrilled to be answering to a girl that's old enough to be their daughter.

Email ThisBlogThis!Share to TwitterShare to FacebookShare to Pinterest
File this under Iron Man Sucks

Glad I got to meet you before you died.

Where did you get these stains from?

As a young man, this question could quickly test your ability to craft a quality tale of fiction, but in this case, I opted for the stone-cold truth.

Oh, I got those in the sewer.

My mom, as I recall, didn't bat an eye, and likely didn't even offer a follow-up question. She was more concerned with how the Hell she was going to get this brown stuff off the back of my white T-shirt. See, as a chubby sixth grader in the fall of 1990, along with a rag-tag crew of my friends, I used to explore the sewer system that ran throughout our quaint Hawaiian town. Crouching, we'd enter the small drain that emptied out into Josh's backyard and then find the main drain that flowed through the center of town. It was so tall we couldn't touch the ceiling, not that you'd want to in the first place. And being that it didn't rain much in our town, there wasn't really much down there of note. Well...

...until we found a dead body. 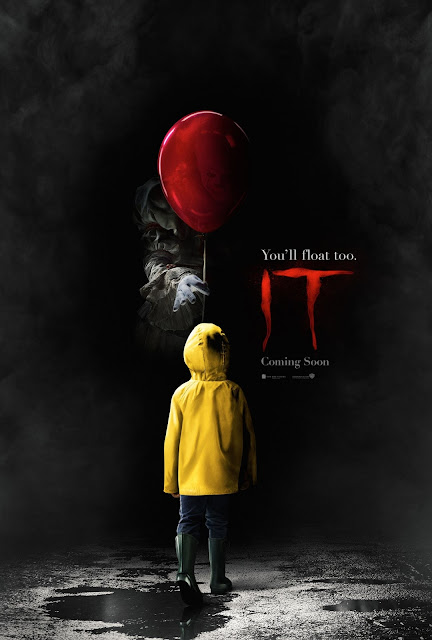 Oddly enough, that same sixth grade year was the first (and only) time I read Stephen King's epic novel, It. As a kid, it was surely a memorable read, but I can't honestly recall if the exploits of Pennywise the Clown started or stopped our sewer-exploring exploits. We were really dumb kids, obviously, so it could have went either way (and perverts, too, as I read that one scene more than once to this group of deviants).

As an adult who ain't got time for any of that (reading lenghty novels and/or sewer browsing), I somehow found myself dealing with that creepy f--king clown again, exactly twenty-seven years later. But instead of swinging a dying flashlight around a musty drain pipe with Josh, Aaron, Jenny and Jess, it was me and Grunden and a packed f--king house to see the big-screen adaptation of It. Regardless of what anyone actually thought of the film, it was nice to be at a f--king event.

While the book bounced back and forth between the childhoods and adulthoods of the main characters, director Andy Muschietti and his writers instead tell the sordid tale of Derry, Maine by focusing only on the early days of Bill, Eddie, Ben, Richie, Mike and Beverly. It's an interesting (if ultimately unsurprising) decision that pays off handsomely in the hands of such a gifted and charismatic cast of young actors.  While the film is certainly unsettling at times, it is an absolute joy to spend two hours with these incredible kids. And I don't say that lightly, as you know, I'm a teacher. Meaning?

Email ThisBlogThis!Share to TwitterShare to FacebookShare to Pinterest
File this under (Sh)IT Happens

When I talk to him, I feel like I'm outside.

Being that I'm four-fifths unsightly troll, I had to work really hard to get a girl to like me in high school. Really hard. I had to like, be witty and stuff. Always. I had to (not) captain our (winless) varsity basketball team for two tumultuous seasons of BIIF (Big Island Interscholastic Federation) competition. Hell, I wrote f--king poems, you guys. Actual rhyming words, for f--k's sake. Oh, and Taco Bell? It's on me, m'lady. And, yeah, f--k it. Get some Cinnamon Twists, too. I'm making those part-time high-school janitor dollars.

But maybe love shouldn't be such hard work, right? Maybe it takes more than the personality and charm of a middle-aged bus driver catch the eye of a lovely young woman. Maybe it takes something more universally coveted. Something like...

And a f--king skateboard.


In yet another episode of m.brown is a stupid asshole who watches shitty movies like a middle school girl, I decided to give something called Everything, Everything a go. Redboxed from the gas station nearest my house (which for some reason, creepy Google has decided is my place of employment), this teen-drama made me feel like a very old man. Like, the young people were talking, but a f--k I could give. Yeah yeah yeah, your life sounds real hard, kid.

Try being a f--king adult.

Maddy is days away from turning 18, when the edgy and brooding Olly moves in next door. While it would be nice to meet him behind the U-haul for an e-cigarette and some dry humping, ol' Maddy can't leave her house. Ever. Yep, this chick has some ultra-rare immune deficiency or something, and any contact with the outside world will kill her immediately. Or so says her mom, Dr. Pauline Momlady (possibly not her real name). And maid Carla, you know, the one who just walked in from outside and handed Maddy the f--king mail.

You're probably smart enough to know how this one ends, but clearly I ain't exactly setting the world ablaze with my mental capacity, so it took me way too many of the 96 minutes to figure it out. While I was hoping Olly would put 'em on the glass for Maddy to gaze at longingly, these two lovers are going to surprise everyone/no one, and break all your goddamn rules in the name of true love.

Email ThisBlogThis!Share to TwitterShare to FacebookShare to Pinterest
File this under Sniffle and Olly

In order to quickly find some common ground with my students, every year I begin with a short presentation about my life. I talk about my hobbies and interests, my dog, my depressing job history (they're always rather impressed I used to work at Best Buy), and most importantly, my family. And while I cover each of my four siblings (and my own kids) in some detail, I can't help but take a little more time for my favorite of the bunch: my little brother.

Obviously, everybody in my family means a great deal to me, but there something a bit more special about the goofy/handsome bastard born after me.

It's like, even if he doesn't need it anymore, I feel like I gotta take care of him. Or at least look out for him, you know? But there's a price for that extra love.

I also give him a little more shit, too. 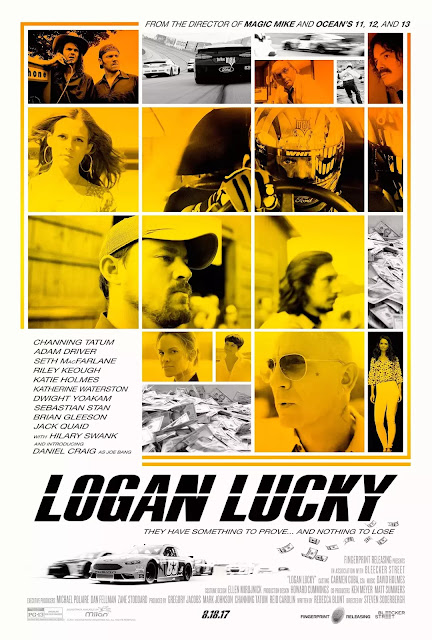 My kid brother didn't accompany me to the early afternoon showing of Logan Lucky I somehow managed to catch this past Friday, but I left the theater feeling like he had. Turns out, when you spend two hours watching a pair of goofball brothers bumble their way through an elaborate heist, you can manage to steal time with someone you haven't seen in almost three years.

Channing Tatum plays Jimmy, fifty percent of the unfortunate Logan brothers, each seemingly doomed to a failed existence. When we meet Jimbo, he's doing the single-dad thing with his adorable little daughter Sadie, and trying to scrape together an honest living. Jimmy was supposed to make it to the NFL, but after ripping up his knee, ended up working construction near his shitty home in Bumf--k, West Virginia. Which is exactly where his boss sends him, after laying him off due to the dreaded pre-existing condition.

Shit, right? Sounds like Jimmy might need a drink. So he heads to the local dive bar, which just so happens to be run by his one-armed brother Clyde, played by the delightfully/perpetually sullen Adam Driver. Clyde is a good dude, even if he doesn't have much to show for it. And when Jimmy decides to rob the Charlotte Motor Speedway, shit, Clyde doesn't bat an eye. His brother needs help. It's not like he'd ever say no. He's just gonna talk a little shit first.