You youngsters/cool kids might not remember it, but there used to be this sweet cartoon called Ducktales. It had all the hallmarks of animated greatness: action, adventure, incompetent villains, identical triplets, Scottish fowl - you name it. There was this one particular episode that consumed my imagination as a kid. A device was invented that froze time and allowed its users to move about freely while the rest of the world was standing still (technically, they were moving at regular pace, but anyway...). Huey, Dewey and Lewey used it to win a baseball game, which as a nine year old boy, seemed like the best possible use of such a device. 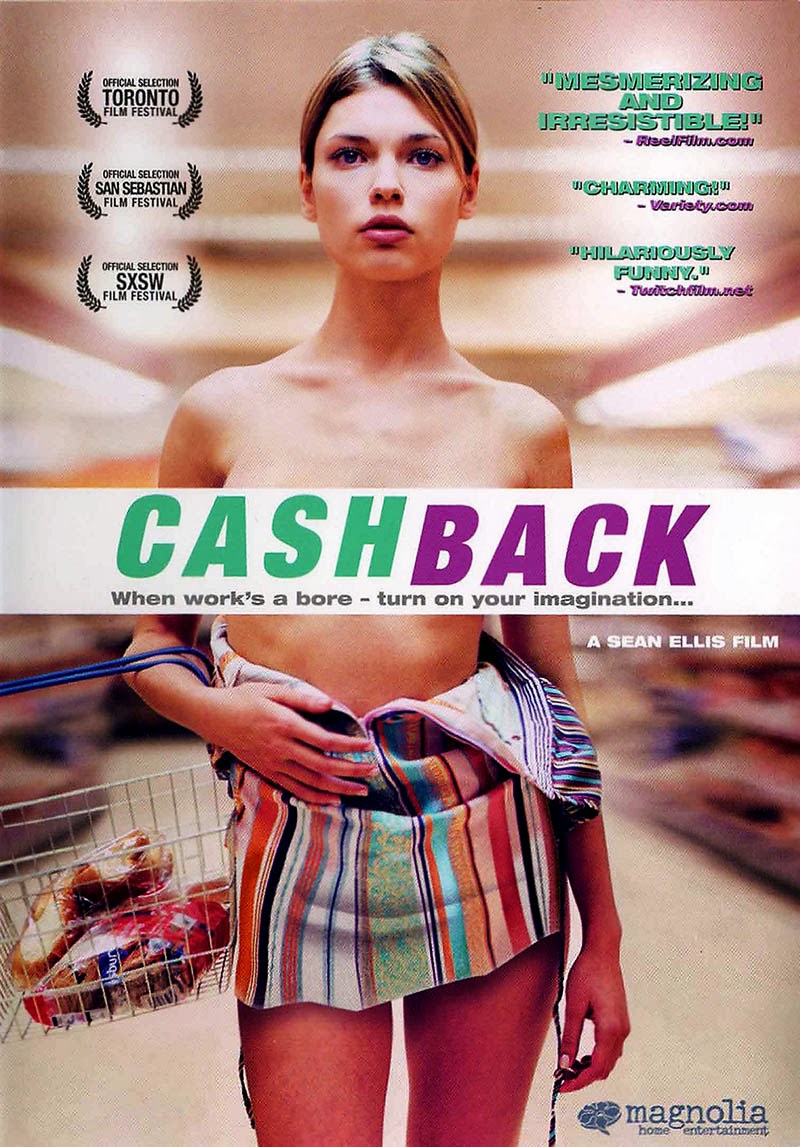 Cashback surprised me. I had never heard of the movie til I was doing a little research for my t-shirt giveaway. I was searching for classic nude scenes to alter when I came across this list. Long (and pathetic) story short, I decided to add this flick to my Netflix queue based solely on salacious reasons. But that's not why I'm recommending you check it out. Well, not the only reason anyway...

The story is charmingly simple. Ben, a young art student, gets dumped and as a result, has lost the ability to sleep. He decided to trade his idle time for the overnight shift at a grocery store. Turns out, perhaps unsurprisingly, that the graveyard shift is full of some odd characters. But our main man Ben? Well, he might be the oddest.

In the section of the movie I loved the most (well, outside the glorious nudity), Ben details the lengths that each employee goes to to make the the time fly by. Each person's trick is increasingly bizarre, but as someone currently getting paid to watch others work I devoured these bits. Anyway, young Ben has come up with the best trick of all. He has discovered that, for him, time goes fastest when it is frozen. Yes, rather unbelievable (yet portrayed convincingly) Ben can freeze time.

But remember, Ben isn't a cartoon duck. Ben has no interest in winning a baseball game with his magical power. Ben's an art student. Who loves the female form. Ben decides to freeze time and undress the implausibly hot women that shop at his grocery store and sketch their nude figures.

While the initial twenty minutes or so was kind of like staring into the sun, Cashback settles into an intriguing little movie. It's full of small-film quirk, and perhaps relies on the time freezing trick more than it should, but overall I liked it. I cared about Ben and his plight, and the supporting characters were the right kind of crazy. Again, maybe it will remind you of a dead-end job you had years ago. Or worse, like me, it will remind you of the dead-end job you currently have. Either way, give it a shot. At least you're not at work, right?

Also not working, ever, are the Yays and Boos. I mean, these two would like to get a job, but they're not even three years old yet.

Boooooo!
Actually, speaking to my perversion/obsession, let me tell you this. In a sign of oncoming dementia (or simply adulthood), I hesitated even starting this one. For once, T & A weren't going to be enough for me to slog through another shitty flick. In fact, I wanted to make sure it was decent before I even bothered. So quickly, I hit up IMDb and saw that it had a user rating of 7.3, which is pretty good, all things considered. But just to be safe, I scrolled down to the comments, just to skim the titles. Fourth comment down said this:

Email ThisBlogThis!Share to TwitterShare to FacebookShare to Pinterest
File this under Swimming in the Moneybin