All you have to do is believe. Then, you will see everything.

In 2005, my wife (back when she was my girlfriend) paid for us both to go Disneyworld for a week. We had a good time doing all the normal Disney stuff: the rides, eating, a moderately lame show, more eating, fireworks, still more eating, a parade, some more rides, and then, before bed, more eating. It was all very typical, but still very enjoyable.

On our last day, we went shopping at some place (Adultland? Adventureworld? Adultadventureworld?) that had a store I had never, ever been to before. An entirely unique experience that I put as much imagination and effort into as anything we did at Disney in the preceding six days. They had a Lego Store. And you get to fill the container with any pieces you want. 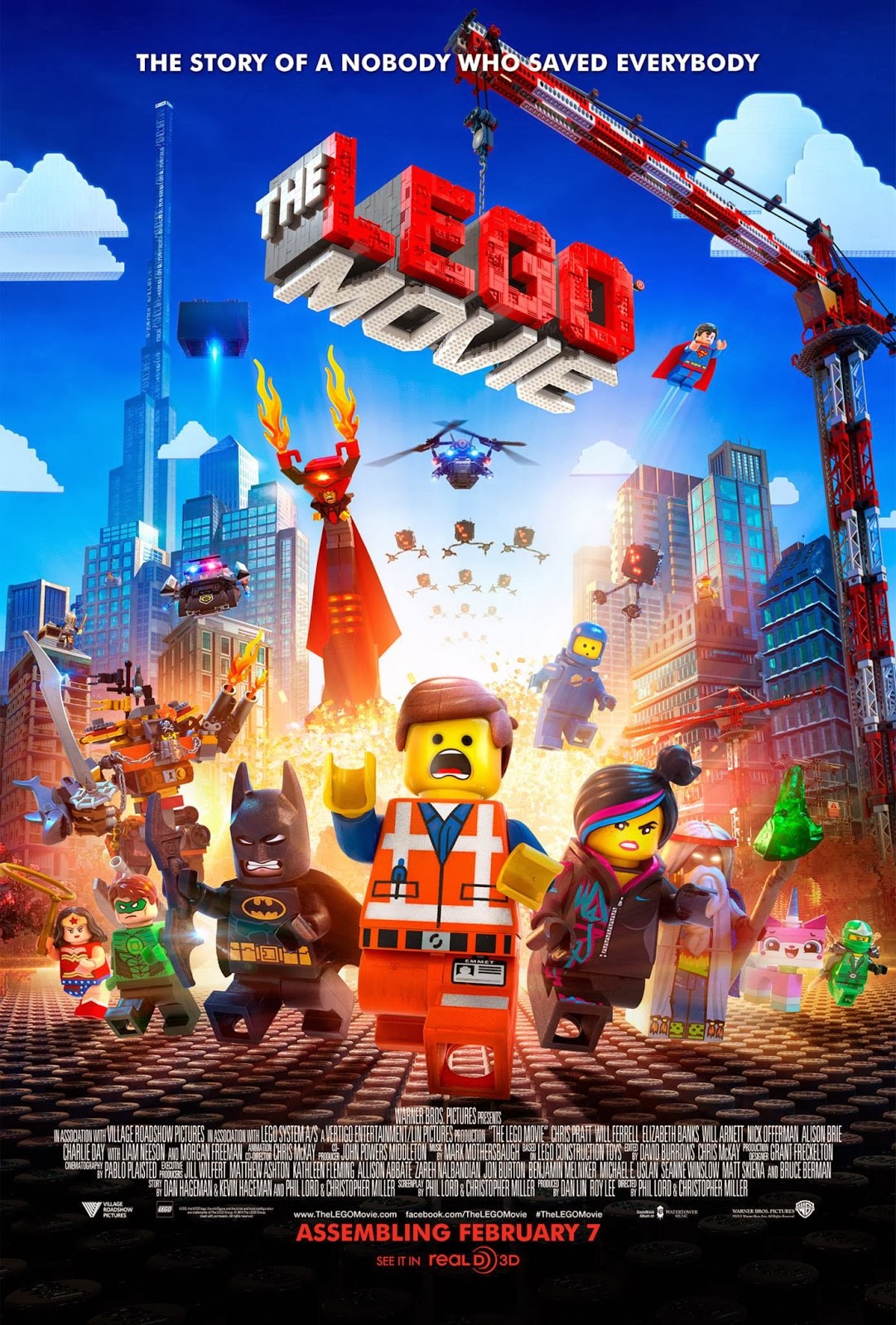 My point, if there is one, is year after year of happily devouring Disney flicks (and to an extent, Dreamworks), seeing The Lego Movie felt like some kind of epiphany. I went in expecting greatness, and was only let down by the fact that I couldn't immediately watch it again. Trust me, this might be the most fun you'll ever have at an animated movie. It's that good.

While the story is certainly charming, it's not like something we haven't seen before. Well, sort of anyway. Imagine putting Toy Story, Kung-Fu Panda and The Matrix in a blender, and you'll have The Lego Movie. Even though it reminded me of other stuff, it did nothing to lessen my enthusiasm in the least.

For me, and probably most other guys, the pure joy was seeing all these Lego versions of things we loved as kids come together in truly awesome fashion. Batman, Superman, Shaq!, Dumbledore, Wonderwoman, Lando Calrissian, Michelangelo and even Abraham Lincoln to name a few (assuming there's a kid out there who loves Honest Abe), are onscreen together in an orgy of imagination and comedy. Half the time, I simply wanted to pause any given frame and just stare. Gents, you gotta see this one. Ladies, imagine Jem and Rainbow Bright riding Starlight around Polly Pocket's house and you might be in the ballpark. Probably not though, as, you know, all girls toys are super lame.

But even with all the eye-candy, there does, in fact, need to be a story. The Lego Movie tells the tale of Emmet, a very average dude who loves pretty much everything. Even soul-crushing routine. One day, he is plucked from obscurity, labeled the chosen one, and asked to join a group of renegades going against the status quo. In Lego terms, these are people who don't believe in following the directions. This group, the master builders, use the tiny bricks to create whatever their imagination tells them. It's very clear that Emmet is the wrong guy, but that doesn't stop him from trying anyway. It's a very cute story, with a surprisingly imaginative (and rather funny) ending. I'm honestly looking forward to it's turn in the blu ray player as the Can we watch it again, Dad? movie of the month/year.

I'll be the first to admit I was a kid who only built what was on the box. I know, what a dork, but at least I've grown up to think outside of it and shirk any sign of monotonous routine. On that note, here are the Yays and Boos. Again.
For like, the two hundredth time.
In a row.

Booo!
Back to the Lego store, I remember carefully trying to get as many pieces in that container as possible. I was working with the precision of someone disarming a bomb. When I was finally satisfied there was no air left in the container, I smashed the lid on and headed to checkout, the happiest man-boy on the planet (even though they don't let you put a single Lego guy in it).

But the next time I opened it, and basically every time since, I couldn't get all the pieces back in. It seems not only was the cup full, it was literally bursting with Lego goodness..

Email ThisBlogThis!Share to TwitterShare to FacebookShare to Pinterest
File this under My Cup Runneth Over, So Good I Almost Shit A Brick