The Ten: Most Iconic Movie Characters

When I started this blog, my mentality was nothing but reviews. Once I was approached to join in on my first blogathon [check it out], all bets were off. Lately, they've been coming one after another, and honestly, I kind of like it. A lot.

Recently, Elina over at the super sweet Films and Coke passed me the torch in a different kind of blogathon, the always fantastic relay.

Started by Nostra at My Film Views, the idea is simple: Take the inherited list of ten iconic characters and drop the least deserving and replace him/her/it with someone else. When you're done, pass it on to another blogger, and let the good times roll. Here's who is staying on the list (for now): 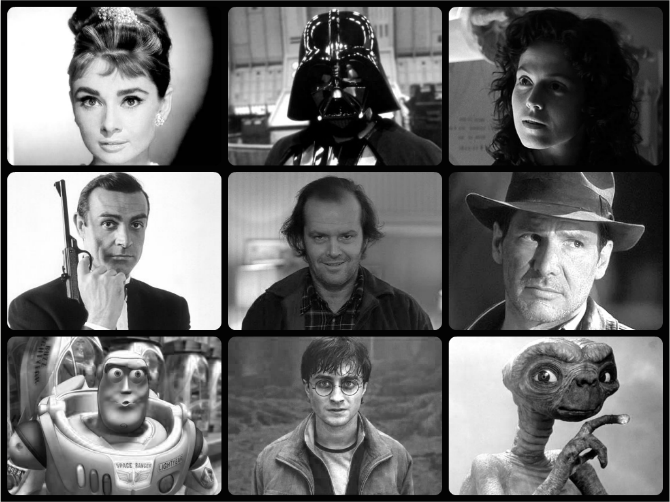 A very solid nine, wouldn't you say? While keeping these icons was fairly easy, someone had to go. And I'll be honest, I wanted it to be Jack from The Shining, but that was Elina's pick, and remember, she was the one that passed the relay to me in the first place (seems rude, to me...haha...not that the people who did that are rude or anything...). So, without further ado...

Clearly, this may seem blasphemous, but I don't think there are many people on this planet that wouldn't recognize the iconic character of Jason Voorhees from the the Friday the 13th film franchise. Even if he's only relevant one month a year, I think he's currently more iconic than Scarlett O'Hara, a character from seventy-five years ago. I know, I know, even as I type these words it feels like I'm committing some sort of cinematic/blogger hara-kiri, but I'm going to stand by this selection. Jason represents an entire genre probably better than any other single character possibly could.

Well, now that those bridges are burned, I'm going to pass this wonderful opportunity/monstrous burden to Wendell Ottley over at Dell on Movies. Fingers crossed he adds Teen Wolf...

Email ThisBlogThis!Share to TwitterShare to FacebookShare to Pinterest
File this under Gone With (It's Just) The Wind