In what could (hopefully) become an annual tradition, my wife and I attended our first film festival this past weekend. In a bit of good fortune, the Harrisburg-Hershey Film Festival was held on the weekend immediately prior to my birthday, so it would seem the almighty Movie God (thanks, Dell) was kinda looking out for yours truly.

I wasn't the only virgin there, as this was the inaugural event dedicated to celebrating Central Pennsylvania's (relatively) modest film industry. And as much as I wanted to attend as Blogger Guy, I instead dialed it back and went as Random Dude, though between you and me, it was more like Young(ish) Random Dude, as the crowd was more likely born in '36 rather than celebrating turning 36.

Here's the breakdown of the short films that kicked off the 5:00pm slate on Saturday, September 12th:

Film #1: A Man on the Edge
Written and Directed by Edward Lyons
Runtime: 11 minutes

The film opens, unsurprisingly, with a man standing at the top of a cliff. He's upset, and we see him looking down on the jagged rocks and crashing waves below. He's going to jump. But before he can end it all, a beautiful (and rather persistent) woman interrupts him and peppers him with questions. What are you doing here? Have you come here to jump? He lies to get rid of her, but she continues to press, thereby further heightening his already fragile state. Finally he snaps at her, I killed my wife.

This was my favorite film of the bunch. Maybe because it was first, but more than likely it was the fact that in just a few minutes, I felt it all. Moments of joy, a bit of romance, and even a smile or two all got to mingle with overwhelming, rip-your-heart-out despair. Beautifully shot, wonderfully acted, A Man on the Edge was simply captivating. I highly recommend tracking this one down (watch the trailer here). 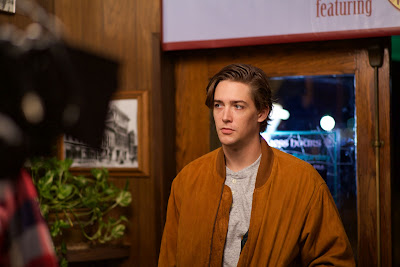 Remember when you graduated from high school and swore you were gonna leave this damn town forever? Well, so does Jonah, the main character of Williamsport. Unfortunately for this twenty-something however, his grand plan never really worked out.

We meet Jonah as he reluctantly pulls up to his mom's house, tail slyly tucked between his legs. Mom's thrilled her oldest boy has come home to visit, but it's hard to give a good hug when you've got your hand out. Too bad she's broke, as is Jonah's younger brother, a kid that's more than a little pissed that his big bro left and never looked back. We all know that brothers don't shake hands - they hug, unless you're in this little Pennsylvania town, of course. 'Cause in Williamsport, they don't hug, either. They enter waffle-eating contests!

Even with a very simple story, not to mention a silly event tying it all together, I still enjoyed the themes of Williamsport. Probably more than the film as a whole. The cast does an admirable job, and the outdoor shots are invitingly warm, but outside of the ending, it all feels a little hokey at times. Yeah, it's a small town (in a small movie, no less), so the quirk can be a bit suffocating, but in a way it's probably to be expected. I commend the efforts of the cast and crew, and certainly wish them the best. It's simply a story that, even as a distant older brother, didn't really resonate with me. That said, at eighteen minutes, it's still worth taking a look at. 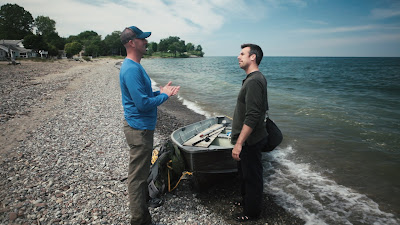 In an odd amalgamation of the previous two films, Bottled Up tells yet another story of a suicide attempt, though this time with brotherly understanding simmering below the surface. Unlike Williamsport, it's not the characters that are dueling brothers, but instead it's the actors playing those characters. In fact, three of the five people featured onscreen are played by one of the Juergens' boys. It's quite the family affair.

We meet Daniel after yet another bender, and it's clear that his life is in shambles. His sponsor attempts to help him, but Daniel is too far gone, and is uninterested in turning his life around. Eventually he heads to his friend CJ's house, where he borrows a boat. His plan is simple: to row across Lake Michigan. CJ may not let on, but you get the sense that he's on to Daniels thinly-veiled suicide mission. CJ gives him not only the boat, but he also packs him a solid stash of supplies, too. Daniel? He just packs booze, rope and a weight.

Through some flashbacks, we see what happened to propel Daniel down this dark path. And while it's certainly interesting enough, it's what happens out at sea that really grabbed me. There's a very cool moment at sea that will certainly stay with me. Everything about the scene is impeccable...especially the timing.

It doesn't hurt that some of the shots on the lake are about as picturesque as any mega-budget film could conjure up. And the score is the right combination of inspirational and melancholy. Even though I'm not a religious person in the least, I appreciated the message that Juergens' film conveys.

I would be remiss if I didn't mention, however, the biggest downfall of Bottled Up, and that would be the acting chops of the principals, Sam and David Juergens. As technically impressive as the film is, sometimes the real heavy moments can be a bit of a tough sell for the audience. I commend the guys for trying, but I honestly think the story would have been better served with more experienced actors. Hopefully a successful film-festival run may get them that opportunity. That said, I still enjoyed the film.

Before I go, can I tell you how surreal it is to watch a film and then immediately have access to the people who created it? For me, it really f--ked up my plan. It's not to say that I went there to revel in slamming small films or anything, but seeing the creators face-to-face immediately after the credits rolled? That changed me. I suddenly appreciated everything about the films, even the weaker elements.

That 35 year-old guy that has a website where he routinely makes fun of movies? Well, let's just say after the Harrisburg Hershey Film Festival...he doesn't exist any more.

Email ThisBlogThis!Share to TwitterShare to FacebookShare to Pinterest
File this under Hershey Disses