My grandfather, Richard Brown, passed away last week at his home in Bristol, Connecticut. He was surrounded by two of my aunts and two of my uncles, and apparently it was as peaceful a passing as one could ever hope for. He made it a day past his 92nd birthday, which was two days after I turned 38. Shocking no one, I was sitting in a movie theater when I got the call.

I didn't answer my phone, but seeing that it was my own father calling from Hawai'i (and it was not on a Sunday), I knew the contents of the voicemail awaiting me. Though I'm sure he made his fair share of mistakes, and was far from a perfect man, he was an excellent grandfather. He always had time to listen to my nonsense, but even better, he had time to tell me some nonsense of his own. And when one of his ridiculous stories would end, he'd often sum it up with a favorite go-to phrase:

Had he been sitting in the third row with us (shoot, maybe he was), my grandfather could have turned to my wife and I and used his old punchline once again to perfectly sum up how we, attending our third consecutive Harrisburg-Hershey Film Festival, felt as each short ended. All of the films were well-made, and one could assume, deeply personal, but as likely the only people in the sparse crowd not in the cast or crew of the entries, it's safe to say we didn't enjoy them as much as everybody else seemed to, you know? 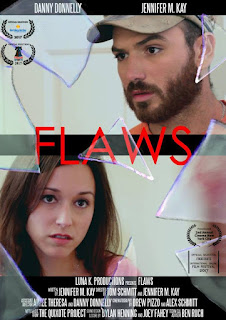 Loving someone else can be a real bitch, as more often then not, the person we've given our heart to, well, ain't exactly perfect. It's a good thing we're all f--ked up then, as that's likely the only way anything's ever gonna get beyond half-hearted handjobs behind gas-station dumpsters. Uh, or something.

Anna seems to be teetering on the verge of an emotional breakdown, and when she discovers that her man is smoking cigarettes and drinking alcohol behind her back again, she snaps. Like every guy in the world, Jay unknowingly walks head-first in to this hornet's nest. Words are exchanged, handles are flown off, and he ultimately storms out, leaving Anna in pieces on the floor of their bedroom. F--k this. F--k her. F--k everything.

A very intimate short, slightly undermined by a few of the exchanges between the leads, I enjoyed what Flaws had to say about relationships and love. My wife? The woman that I love unconditionally? She wasn't a fan in the least. Really, Wife? Really? Who are you to judge someone's poor decisions? I mean, look at who you married.

Film #2: When the Family Came to Dinner
Written and Directed by Ethan Cadoff
Runtime: 2 minutes 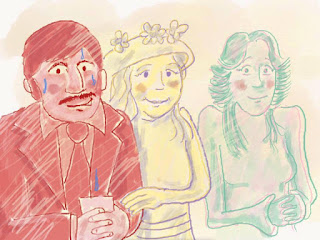 You know that dream where you're the only naked person in the room? Well, imagine that you're totally okay with it, even if that room is full of your entire family. During the holidays.

When the Family Came to Dinner is a crude little short, but comes and goes so quickly it's oddly endearing. I dug how the other partygoers voiced their displeasure at the very naked protagonist (they literally say discomfort, discomfort, discomfort over and over again) and the brief, but relentless trying on of pants. I didn't exactly get what was going till later (more on that in a bit), but was pretty f--king pumped how this one ended. My wife? I think she was just glad it did. 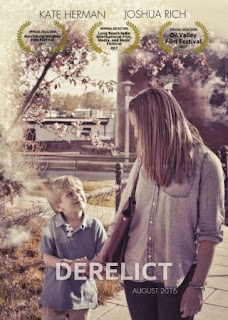 You might have better odds at spinning your head on a baseball bat ten times then dizzily careening through a minefield than successfully reaching adulthood without major childhood trauma. Parents, despite their intentions, are likely to f--k something up, and it's up to us as kids to survive long enough...to f--k up the lives of our kids.

In Derelict, we meet a single mom grinding through life in the rather unspectacular neighborhoods of Baltimore. She's angry, so angry in fact, that she's been ordered to take anger management classes. And it's in one of these classes, where she comes face-to-face with the root of her constant frustrations. It's a Hell of a coincidence, sure, but not totally unreasonable.

Derelict is a slick-looking flick, with a satisfying conclusion to its short little story. And even if you're not a huge fan of the film, spend two minutes in a Q & A with Detrick, and you'll be won over almost instantly. People like this guy is why I'll continue to go to film-festivals, as his quiet passion for filmmaking filled the room with life. The fact that he based this film on a short story about Gerard Butler of all people...makes it even better.

Check out the trailer here. 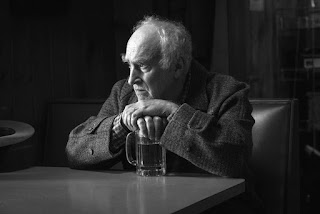 While I find so much wisdom in Cameron' Crowe's classic film Jerry MaGuire, director Karen Allen (uh, Marion from Indiana Jones) explores a similar sentiment in her short film, A Tree. A Rock. A Cloud. Based on an old story by Carson McCullers, this curious little picture was easily the most polished product we saw at HHFF.

Starring the utterly fantastic Jeffrey DeMunn, this film takes place in long ago in a crowded, dusty restaurant. A young boy comes in for a cup of coffee, and before he returns to his paper route, he encounters an old man looking to share some wisdom. And love, honestly, but not in the way you might expect.

While this simple (though a bit laborious) exchange may not sound compelling, DeMunn creates a character than could be the more eccentric version of any of our grandfathers. He's an old man who has seen a lot, and loved (and lost) even more, but he presents his case for universal affection and empathy in such an endearing way it's hard to take your eyes off of him.

Though to be fair, maybe that was just me.

As I did last year, I'd like to thank all of the writers and directors who showed their films, as it was readily apparent that each of these stories meant something to all the people who worked so hard to bring them to life. Sure, some of them (/all of them) weren't exactly the good time we might have been hoping for, but on a Saturday night without our kids, during which we found out my grandfather was gone, believe me, we were more than okay with relentlessly serious and depressing.

Email ThisBlogThis!Share to TwitterShare to FacebookShare to Pinterest
File this under Short Films/Long Life