We might die together. And I don't even know you.

When it comes to traveling with Kate Winslet, uh, cinematically, I've got a little good news and a little bad news for you. The good news? At some point during the journey, it's gonna be business time. It doesn't even matter if one of you is betrothed, either. You will be overcome with emotions, and will have sweaty, potentially life-altering sex in some place you shouldn't be.

But the bad news? Hopefully you didn't pack anything of value. Because not only will your luggage fail to arrive in a timely manner, but there's a good chance the vessel carrying you won't either. To be fair, shit tends to slow down when it's ripping apart spectacularly.

Oh, one more thing. All that romance, that was hot. My pants are still on fire just thinking about it. Too bad though, as your chivalrous ass is going to f--king freeze to death in the middle of nowhere.


Okay, so maybe there are many other cinematic instances where accompanying Ms. Winslet is a sex and disaster free endeavor. I'm open to that possibility. But being that The Mountain Between Us is only the sixth or seventh film I've ever seen with Rose Dewitt Bukater in the lead, I'm going to just assume they all end the same way. Maybe a sexy car crash on that Revolutionary Road, perhaps?

Winslet plays Alex, a spunky (perhaps a wee bit bitchy) photographer attempting to head to her wedding in the Mile High City, only to be crushed when she finds out her flight has just been cancelled. Overhearing this dreadful news is the dreamiest of McDreamies, Ben Bass (Idris Elba, classing up yet another stinker), also desperate to get the Hell out of wherever they are. Bass has a surgery tomorrow in Baltimore, where he'll be operating on my incessantly raging boner for all things Elba. Or a sick kid. One of those.

Cut to the unlikely pair hiring The Dude's brother to fly them out ahead of the storm. Ooh, about that. One terrifying as f--k plane crash later, and Alex and Ben are fighting not only the elements, but also a mountain lion and each other's survival instincts. Oh, and the inevitable desire to bunk the Hell up (you know, to stay warm) when given the chance. That mountain between them...might just be made exclusively out of reproductive organs.

Yet another entry into Two Dollar Cinema: Couples Edition, I Redboxed this one hoping to start (and finish) a film with my wife that didn't feature singing and dancing animals and/or British children (we've been watching entirely too much Topsy and Tim lately, good God). And while it took us two nights to actually start, once we finally cranked this one up, dare I say it was enjoyable...enough. Ultimately predictable, but engaging throughout, The Mountain Between Us is exactly what you'd expect it to be, assuming you expected an average movie with two above-average leads. Gorgeous scenery, consistent peril and just enough romance to ruin your roommate's bathrobe, if you're a fan of either Elba or Winslet, I'd recommend you check this one out. If not, feel free to charter a plane and have it crash into the side of a mountain...you soulless jerk.

Speaking of soulless jerking, here are the Yays and Boos. I once left them out in the snow overnight, and when I found them? Oh, God. You don't even want to know. Honestly. Let's just say, I had no idea the Boos were that flexible. Or that angry. 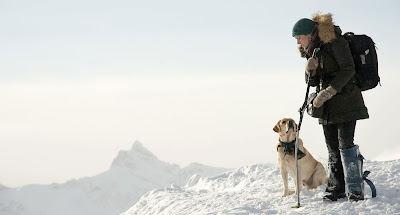 Booooooooooo!
Maybe I need to see some more Kate Winslet movies, before I rush to such ridiculous conclusions. Maybe you don't always get in a horrible accident with her, and maybe you don't have to fight for survival every single time. Maybe things aren't so f--king dire all the time.

And even more pressing, maybe you also don't always have to have sex with her, either.

Uh, nevermind about that last part.
Posted by m.brown at 11:18 PM

Email ThisBlogThis!Share to TwitterShare to FacebookShare to Pinterest
File this under White Snow and Blue Balls