We're not supposed to be down here.

I want to play a game. Oh, uh, you don't have to like cut off the wrong foot or anything, just grab a pencil and some scratch paper, and number that f--ker from one to five, ten if you're feeling really saucy.

I want you to write down the things you're most afraid of. Don't overthink it, just write! We can worry about the order after the fact. I'm going to play, too. Ready? Go.

6. people watching me brush my teeth while I'm only wearing underwear

8. finding a baby somewhere (with someone who says 'we should take this with us')

10. spending any amount of time with TJ Miller 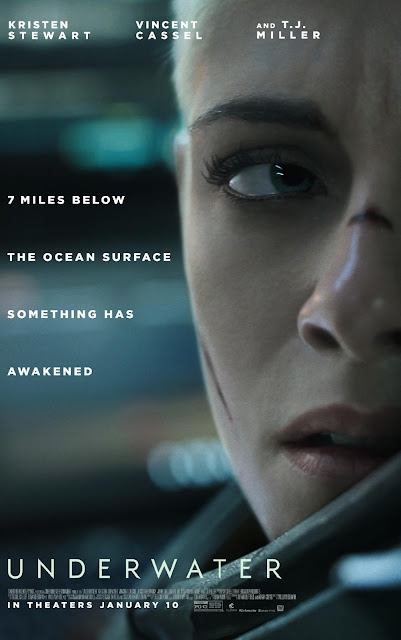 Holy f--k, Underwater, in terms of what keeps me up at night, you just went ten-for-ten. I was going to add in losing my job, and you, you  sonuvabitch, you nailed that one, too. And even more impressive, you did all that shit in under one-hundred minutes. Gold star for you.
It's the middle of the night, or morning (who f--king knows, really), when an earthquake rocks the shit out of Kepler 822, a high-tech research facility seven got-damned miles beneath the ocean's surface. Shit heads south instantly (or, frankly, caves in on itself), as any breach in the core not only floods the labyrinth of corridors, but the tremendous pressure ain't no slouch either. Luckily...sort of, a mechanical engineer named Norah (KStew, not so much kicking ass, but more refusing to let anyone else's ass get kicked) was awake, and manages to keep the whole f--king thing from collapsing. Unfortunately, she does this at great cost to some of her crewmates. Er, former crewmates, as their dead and their workplace is severely, um, compromised.
No matter though, as even the few survivors are totally boned if Norah can't figure a way out of this soon-to-be massive underwater tomb. And since there aren't any escape pods left, the only solution is to walk one (effing) mile across the sub-bottom of the ocean floor to a part of the facility that's still intact. Yep. Just head out into the darkness in some sort of mechsuit thing and hope your head doesn't cave in before you run out of oxygen, mmkay? Yeah, you could f--k right off with that idea on a good day, but trust me, this shitstorm hasn't even really begun.
Turns out, there's some freaky shit out there, and it ain't content with just scaring the piss out of you, either (which it does, early and often). Nope, these bottom-dwellers don't take too kindly to strangers and either want food or friends, or both, and will snatch your ass from the backside like it's motherf--king Dre Day. The silence, the darkness, the creepy-as-f--k nature of whatever the Hell these things are, all of this bad shit adds up to some good times, as director William Eubank simply refuses to f--k around. From the jump, everything spirals out of control and never stops. Even when what's left of the crew has a moment to not die, they're only delaying the inevitable.
Also guaranteed to kill you, are the Yays and Boos. We've slept way too hard on Kristen Stewart, and one of these days we're going to rectify that. Maybe Personal Shopper, perhaps? 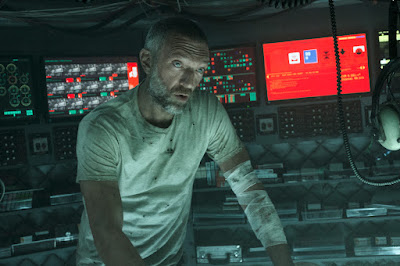 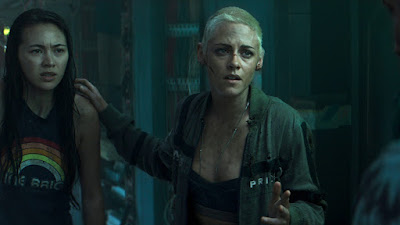 Boooooooooooo!
So, after all that, can I see your list? *puts on reading glasses* Yep. Uh huh. I like what you've done here.
Seems we pretty much agree on most of these, doesn't it? I guess we have more in common than we thought. Especially what you wrote down near the bottom, wow, I couldn't agree more. The mere thought is terrifying, honestly.
6. That Two Dollar Cinema will never end.
Posted by m.brown at 4:57 PM

Email ThisBlogThis!Share to TwitterShare to FacebookShare to Pinterest
File this under What would you know about *pressure*?