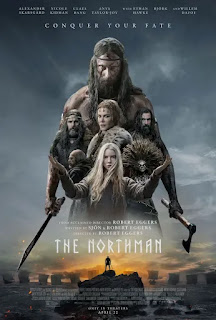 Remember for whom you shed your last teardrop.

With: my sister, my father (my king?)

Could I actually feel him hating the movie? Fully

What's it about? A seemingly docile Viking boy grows into a laser-focused monster of a man, with the singular goal of avenging the murder of his father. Along the way, he joins some sort of mercenary death squad, aiding in the killing of countless innocents, which should make his quest decidedly unsympathetic. Can we really root for a guy to avenge a senseless murder of someone close to him, if he himself is slaughtering families along the way? Turns out we can...at least for awhile.

What works: Outside of some fantastical elements and famous faces, at times this mfer feels like the most badass Viking documentary ever. Hardcore rituals where the line between man and beast is eviscerated by light angriest campfire in the history of time? Yes, please. Skarsgard disappears into the void (that is Amleth, honestly) and it's, initially, pretty f--king thrilling. Throw in an absolutely manic Willem Dafoe (whose long-rotted severed head still belongs to, rather obviously, Willem Dafoe), an eyeless Bjork (I blame that giant teddy bear back in 1993) and one of the dopest scores in recent times, and good times should be had by all.

What doesn't: While the curveball thrown into the Amleth's quest was definitely appreciated (and likely obvious to you non-morons), it didn't make make his journey any more satisfying, frankly. Ultimately, after all we've been through together, what we're left with amounts to damn near zero, and even if that's the point, it felt kind of...fruitless? Even when we get to the final boss at the Lava Level, which should be the story's climax, I honestly just wanted to get the Hell outta there already (it didn't help that I thought the movie had already ended thrice). I was tired of...everything.

Yays: When Amleth goes full John Wick, it's absolutely chaotic in the best kind of way (even though some of the highlights were spoiled in the previews [that spear return is legendary/underused]). Anya Taylor-Joy is welcome in any movie, always, and copious bonus points are awarded for making someone so mysterious, more...mysteriouser? Speaking of love, you can forget it, because what the world needs now is sweet, sweet Willem Dafoe, and it's some sort of voodoo that he's exceedingly delirious in every subsequent frame which he's unleashed. Initially, the pace is to be commended, as our guy gets to where he needs to be on the double (too bad it kind of stalls out after that). And finally, even if this one didn't exactly land for me, there's something to be said for seeing a movie in a crowded theater...that doesn't feature more than one Spider-Man, er, Men. People. Persons?

Boos: The preview was too good, honestly. I think it set me up for something I that I didn't get (an action movie, if I'm honest). Look, I'm just going to say it: I'm not sure Nicole Kidman can carry an accent for the duration of a project (see also, Nine Perfect Strangers). She felt kind of out of place to me. Speaking of pointless complaints, this mfer was too long. I know, that's a weak beef to have, but we could have lost twenty minutes and never looked back. Okay, I wasn't really feeling the actual ending, but the one that takes place before Amleth Vs. the Volcano was even more frustrating. My guy, you've made it. It's over. Take your lovely woman and live your life - there is absolutely no reason to jump off that boat. Fine, maybe that was his destiny all along, but I refuse to accept it. See your epic family tree in person, not just in an orgasmic grease fire (though that was pretty dope).

About my own father: My dad is pretty sick (and has been since January 2020), so every single time I can coax him to a movie I genuinely believe, this is it. This is the movie that he won't shit all over when we walk out to the car.

Email ThisBlogThis!Share to TwitterShare to FacebookShare to Pinterest
File this under Papa Don't Preach